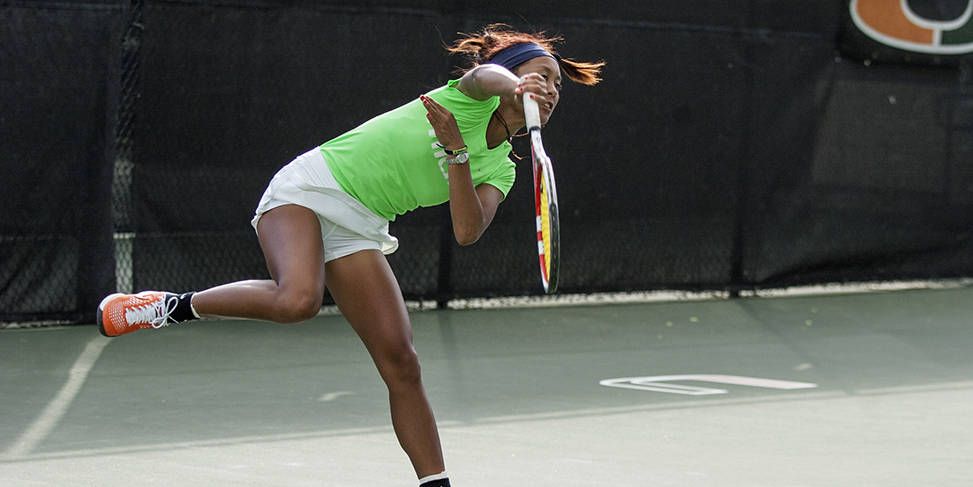 CORAL GABLES, Fla. – The Miami Hurricanes women’s tennis team punched its ticket to the ITA National Team Indoor Championships with a 4-0 sweep against LSU on Saturday to win the Coral Gables portion of the ITA Kickoff Weekend.

“I think we raised our level significantly from yesterday,” head coach Paige Yaroshuk-Tews said. “We were put in a position yesterday where were playing two teams that were ranked much lower than us, but were coming in with some really solid freshmen, a lot of new blood on their teams.”

The Hurricanes won the doubles point with wins from Kelsey Laurente and Melissa Bolivar and a tiebreaking thriller that saw the 29th-ranked duo of Monique Albuquerque and Clementina Riobueno come out victorious.

“Doubles itself, we just played better,” Yaroshuk-Tews said. “We were paying attention to details, playing cleaner tennis, and we were able to push through at the end on both courts.”

The No. 2 doubles team was the first pair to clinch its victory, a 6-1 win against LSU’s Ella Taylor and Ariel Morton. Meanwhile, on court three, Brittany Dubins and Stephanie Wagner were battling it out against Gabrielle Otero and Abigail Owens.

Trailing 5-1 and on the brink of LSU evening the score at 1-1, the 55th-ranked team in the country surged back to tie it 6-6. But before they could finish the match, Albuquerque and Riobueno finished off Joana Vale Costa and Skylar Holloway to give Miami the doubles-clinching win.

“We started off a little slow on No. 3 doubles, starting off 5-1 on the scoreboard,” Yaroshuk-Tews said. “We were able to make some minor changes on 3 and 1. We were able to turn the match around.”

It didn’t come easy for Miami’s number one doubles team either. Albuquerque and Riobueno were down in the match 3-1 before tying it up at three games apiece. After exchanging a couple wins and the tiebreaker was forced, the Hurricanes showed their dominance and pulled away for a 7-3 win in the tiebreaker to take the match.

“I was real happy with the girls in terms of being unselfish in doubles, especially when it came down to the wire,” Yaroshuk-Tews said. “Nobody was rushing to try and get off the court.”

Fresh off the intense doubles win, Albuquerque wasted no time getting out to a comfortable 3-0 lead against LSU’s Owens. The Tigers’ freshman did battle back to win three games, but Albuquerque cruised to a 6-3 set win. In the second set it was much of the same with Albuquerque notching another 6-3 win.

With two wins down and two to go, the Hurricanes led in all remaining singles matches and at that point became a race to the finish line.

“We always need to pay attention to details. With this format, it becomes magnified,” Yaroshuk-Tews said. “One set of good tennis from yourself or your opponent and you have a ball game on your hands.”

64th-ranked Laurente was the next to clinch her victory, winning in straight sets 6-2, 6-3 against LSU’s Noel Scott.

Just a few moments later, Bolivar clinched her match in a very similar fashion. Playing against LSU’s Holloway, who she had faced earlier in her doubles match, Bolivar bolted to a 6-3, 6-1 win to solidify Miami’s spot in the ITA National Team Indoor Championships.

When the match concluded with a 4-0 Miami win, three other Hurricanes were in great position to put the finishing touches on their matches. Wagner was up one set and leading LSU’s Vale Costa 5-2, and Riobueno was up a set and tied 5-5 with Otero. Also with a one-set advantage was Lina Lileikite, who fought for a 6-4 opening set win against Taylor and was tied 2-2 in the second set.

Overall, Yaroshuk-Tews was happy with the singles performance on Saturday.

“They raised their level. They were paying attention to details much better. They were playing cleaner.”

Next up for the Hurricanes is a dual match with Florida Gulf Coast on Thursday, Jan. 30 at 4 p.m. Then, Miami will begin preparing for the ITA National Team Indoor Championships. The tournament that takes place in Charlottesville will be played on Feb. 7-10.