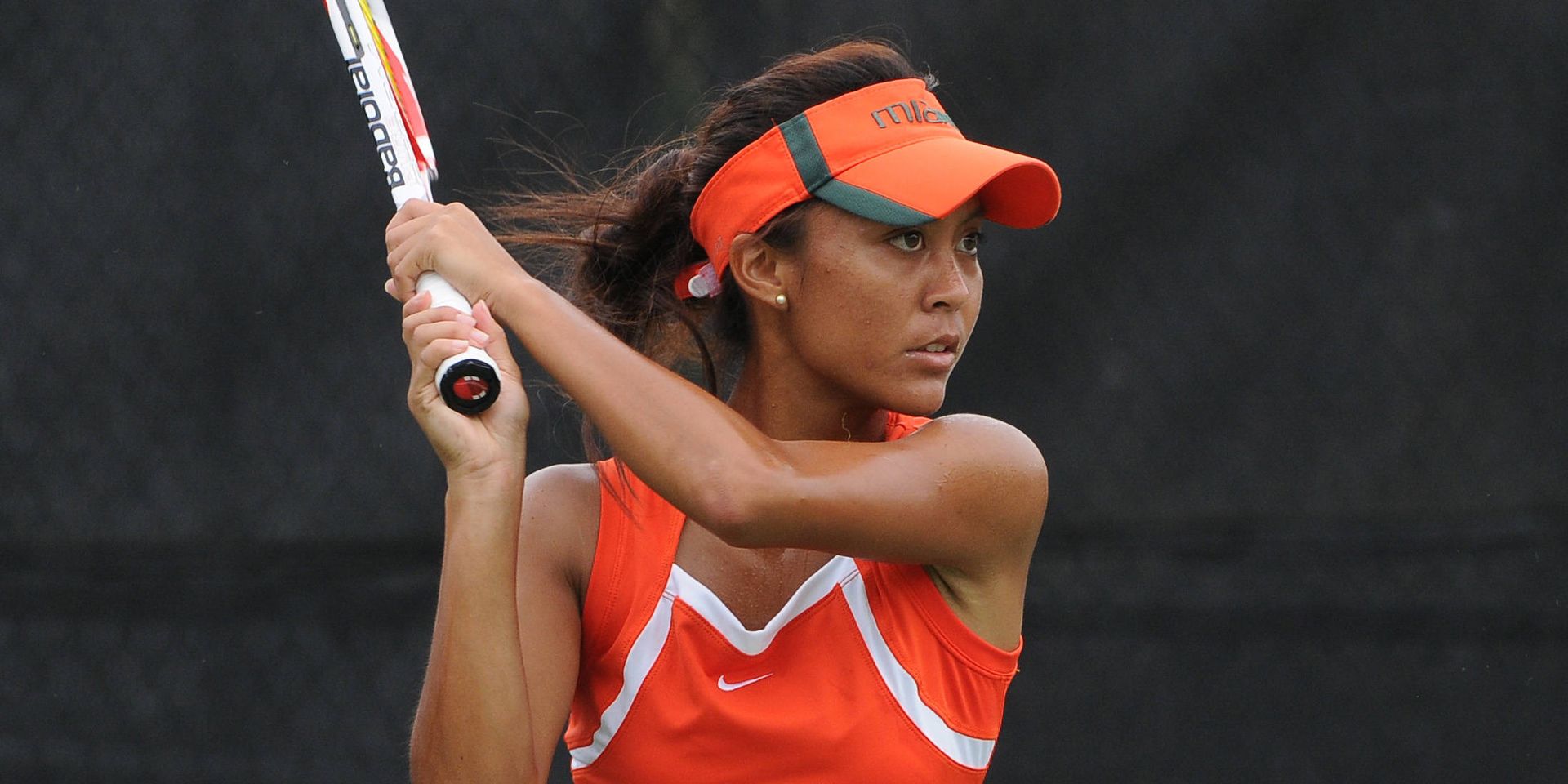 Miami’s 64th-ranked Kelsey Laurente defeated 22nd-ranked Longhorn Breaunna Addison of Texas in one of the more thrilling matches of the afternoon.

“She was a little nervous in the match,” head coach Paige Yaroshuk-Tews said. “She settled into the match and started playing on her terms.  I have a lot of respect for Addison, but Kelsey’s speed counteracted that, and she’s tough to beat.”

After falling behind 5-2 in the first set, Laurente’s comeback effort came up short, losing the set 7-5. But Laurente’s persistency from the first set clearly put the momentum in her favor, as she had a stretch between the first and second sets where she won nine of 12 games. Laurente cruised through the second set 6-1 to force a 10-point tiebreaker in set three.

In some of the best minutes of tennis played Saturday, the sophomore won the tiebreaker 10-8 to take the match against Addison, a Boca Raton, Fla. native.

The cool Saturday morning began a few hours earlier with doubles between No. 9 Miami and Memphis, where the Hurricanes proved deserving of their ranking with four doubles wins against the Tigers.

55th-ranked Stephanie Wagner and Brittany Dubins came away victorious in their match, as they out-smarted and out-played Memphis’ Anki Wind and Marta Morga by a score of 6-1.

After the other doubles matches quickly ended, the 29th-ranked doubles team for Miami, Clementina Riobueno and Monique Albuquerque, battled with Memphis’ Alyssa Hibberd and Caroline Wegner on court one. Trailing in the match 5-2, Albuquerque and Riobueno went on a furious comeback, taking the next four games to take a 5-4 lead. After four straight losses and on the brink of losing the match in regulation, Memphis won the next game to set up a tiebreaker and proceeded to take the first three points in the first-to-seven, win-by-two tiebreaker format.

With their backs against the wall once again, Albuquerque and Riobueno mustered up enough energy for one last comeback. The duo won the next seven points to take the tiebreaker and the match by a score of 7-6 (3).

“It took us a while to find out the patterns that worked better with that team, but once we figured we figured it out, it was easy to play against them,” Albuquerque said.

In other singles matches, Lina Lileikite battled and overpowered her 77th-ranked opponent, Ratnika Batra of Texas, by a match score of 6-4, 6-2.

Trying to continue the momentum from her doubles match, Riobueno overpowered her Texas opponent Neda Koprcina in the first set, 6-3. Riobueno lost the second set, 6-1, and couldn’t regain much momentum, falling in the tiebreaker 10-8.

In a marathon of a match, 32nd-ranked Stephanie Wagner lost the first set to Texas’ Elizabeth Begley 6-4, but showed consistent confidence and play in the second set, which she took to a tiebreaker and won 10-8. In the third set tiebreaker, Wagner asserted her dominance and powered to another 10-8 victory to win the match 6-4, 7-6 (8), 10-8.

In what turned out to be the fourth singles tiebreaker of the day, Albuquerque batted to win two straight sets after falling to Texas’ Pippa Horn 6-2 in the opening set. In the second set, Albuquerque flipped the score, defeating Horn 6-2. Then, in the first to 10 tiebreaker, Albuquerque proved too much to handle, winning the match, 2-6, 6-2, 10-2.

Dubins split the first two sets with Texas’ Lana Groenvynck, winning the first 6-2 and falling in the second 2-6. Then, in the 10-point third set tiebreaker, Dubins came up on the losing end, 10-8.

On the next court over, Bolivar and Texas Longhorn Lina Padegimaite went back and forth in the final singles match. Bolivar defeated Padegimaite in the first set 6-4, before dropping the second set in a tiebreaker 7-6 (1). In the third set tiebreaker, Bolivar came out on top 10-6 to win the match 6-4, 6-7(1), 10-6.

The Hurricanes will be back on the courts tomorrow morning for an 8 a.m. doubles start against No. 16 Vanderbilt. After a brief break after doubles, Miami will play Memphis tomorrow in singles action. For tournament updates tomorrow, be sure to follow @HurricaneTennis and live stats.