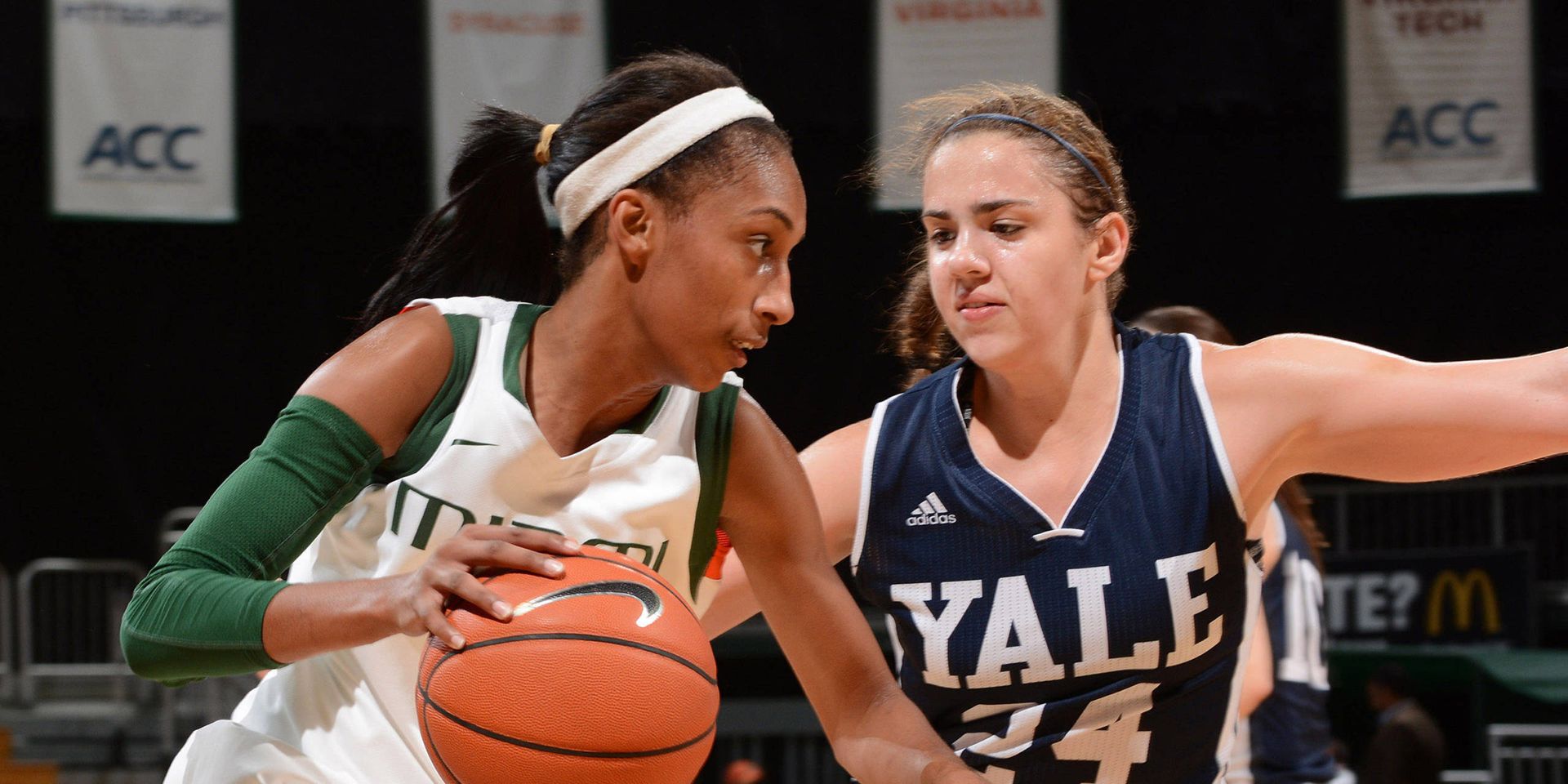 CORAL GABLES, Fla. — In a breakout performance for sophomore guard Caprice Dennis, the Miami Hurricanes cruised to a 91-67 win over the visiting Yale Bulldogs Monday at the BankUnited Center.

Playing in just her second game of the season, Dennis posted a career-high 26 points on 10-of-16 shooting. Sophomore Keyona Hayes added a career-high 17, and Miami (3-2) rolled to its second straight victory heading into its annual Thanksgiving Tournament.

“I thought that was a very hard-fought game,” head coach Katie Meier said. “Yale is one of the most mentally tough teams we have played. We could not break them. We had them down at 35 at one point. I have a ton of respect for them and their program, especially how mentally tough their guards were under our pressure.”

Dennis, who didn’t compile a single double-digit outing in any of her 26 games as a freshman, has posted back-to-back such performances in her first two games this season. She set a new career mark with 14 points last time out against Oakland, and needed just over 12 minutes to best that total Monday against the Bulldogs (3-3).

“I’ve worked for this the entire summer, with coaches day in, day out,” Dennis said. “With the new offense, there are a lot of gaps and easy points. You can get in there and get your teammates involved. Everyone is looking for everyone.”

The Detroit native scored 10 of Miami’s first 18 points, and converted a three-point play at the 7:25 mark of the first half to set a new personal high with 15. In a back-and-forth game at the time, and with her team sporting just a three-point lead, Dennis sparked Miami to an 18-3 run over the next six minutes to help close out the half.

After shooting an impressive 63.3-percent in the first frame, including 17 points from Dennis, the hosts headed into the locker room with a 47-33 lead.

A 9-0 run to start the second half helped put the game away for Miami. Dennis and Hayes combined for all scoring during the decisive stretch, which upped the lead to 23 points at 56-33.

The Hurricanes often overpowered the Bulldogs, outscoring the visitors by a 54-16 margin in the paint. The forward tandem of Hayes and Jassany Williams combined for 29 points, while junior guard Suriya McGuire (12) helped Miami to a 35-point lead, its largest of the night, at the 6:14 mark of the second half.

“I thought Suriya’s energy was tremendous,” Meier said. “Her energy was ridiculous, and really changed the game.”

After three lead changes in the first five minutes, freshman Jessica Thomas hit a jumper to give the Hurricanes a 13-11 lead they would not relinquish. Thomas, who poured in a career-high 15 points against Oakland, has scored in double digits in the first five games of her collegiate career after adding 10 Monday.

“That’s one of the first times I’ve seen this team come together and just play for each other and not be worried about themselves,” Meier said. “And I don’t mean that about being selfish. They’re trying to figure their own roles out. They forgot about all of that, they just played for each other and fought.”

The Bulldogs cut the lead to 85-67 with just under two minutes to go, but were unable to come the deficit. Yale was led by junior guard Sarah Halejian (22 points) and senior forward Janna Graf (13).

The Hurricanes will host St. Francis-Brooklyn Friday in their opening match of the annual Thanksgiving Tournament. Tip-off is set for 1 p.m. from the BankUnited Center.