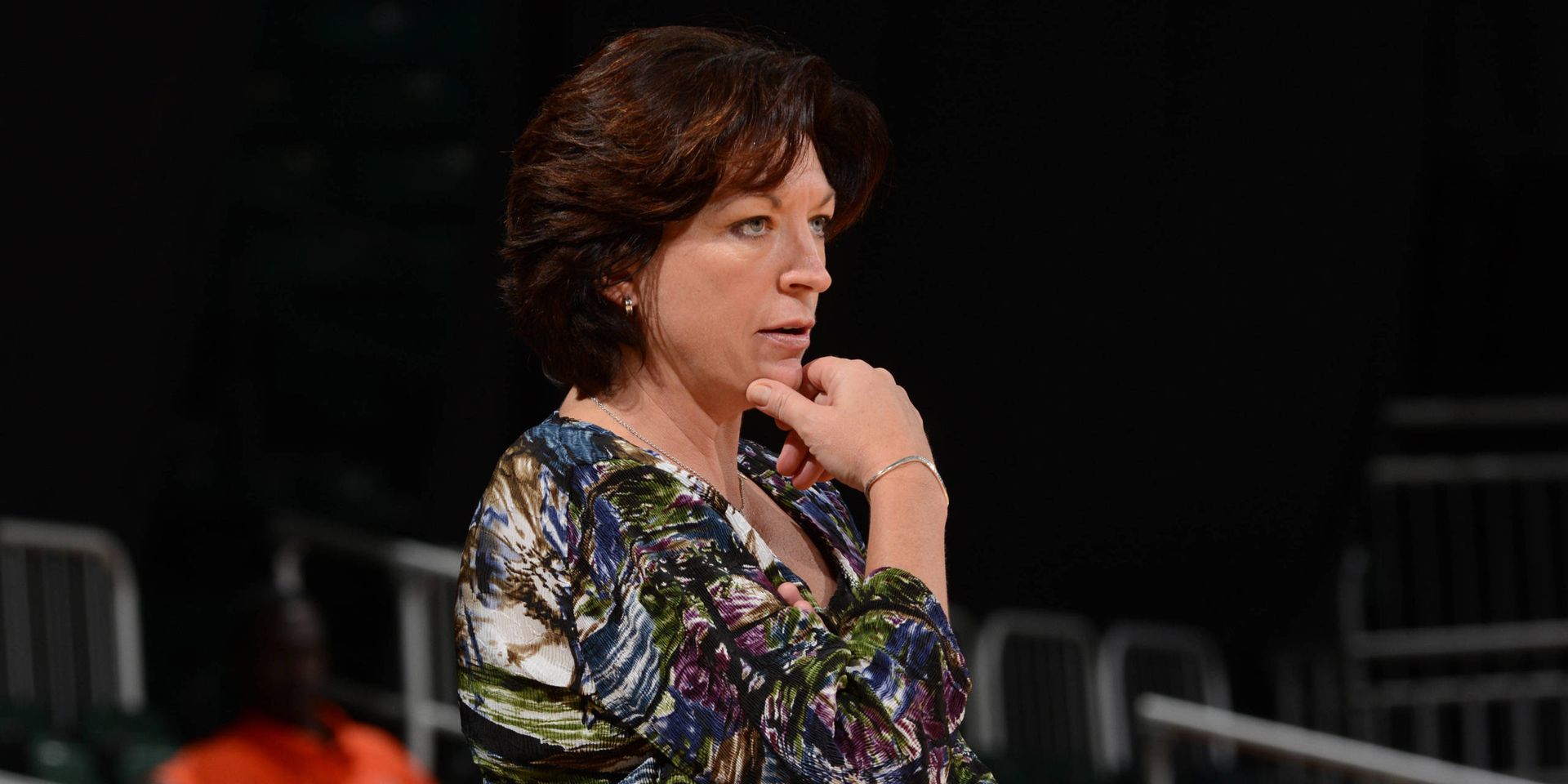 “I first of all want to congratulate my staff and recognize their tremendous efforts in securing another top-20 recruiting class,” Meier said. “Especially with me being away the last two summers with USA basketball my staff really had to step up and be really present and available to these recruits. I’m very impressed with the results of their hard work.”

Edwards, a 5-8 point guard from Boca Raton, Fla., is ranked the 10th-best at her position and 50th overall in the class of 2014 according to ESPN HoopGurlz. As a sophomore, Edwards averaged 19.4 ppg while leading Coral Springs Charter to its first state tournament berth. Edwards was named to the all-county first team in her sophomore season.

“We had her as one of the very top scoring guards in the nation and we’ve been recruiting her for a very, very long time. She has hit more game-winning shots that I have personally witnessed than any recruit we’ve ever signed. It seems like every time I went to see her play it was a close game and Aisha hit the game-winning shot—a lot of times created it on her own. We’re very excited that she’s a gamer. She’s got that confidence and the guts that we love in our guards here in Miami. I think it’s a perfect fit both for her and our system.” Miami head coach Katie Meier

“Edwards is a dynamic playmaker with the ability to create offense for herself and others.  Edwards, a local kid, is very good making plays with the ball in her hands and should be able to set the table for her teammates throughout her career.  Throughout her time in the prep ranks, Edwards’ ability to knockdown the perimeter jumper has continued to improve.” – Keil Anthony Moore, Prospect Nation

“An impact guard with a scorer’s mentality, anticipated to impact early in the ACC.” – Dan Olson, Collegiate Girls Basketball Report

Harris, a 6-0 forward out of Dwyer HS, is the 22nd-ranked forward in the country according to ESPN HoopGurlz. As a freshman, Harris was named Outstanding Rookie of the Year and Second Team All-Palm Beach County.

“Keyanna Harris is one of those athletic wings that allows us to play multiple defenses. She’s a high energy kid. She never stops working, never stops running. One of the most well-conditioned athletes you’ll ever see. Her offensive game is one that used to rely on just her athleticism, but as the years have gone on she’s really developed into a triple threat from the wing—and also played some point guard for her high school which will help us out. She’s a versatile player, along the same lines as Shenise Johnson in terms of being able to play all five positions on the basketball court. I think she’ll develop into a very strong ACC player in her career.” Miami head coach Katie Meier

“Keyanna Harris of Rivera Beach, Fla., has a bundle of upside and the potential to really flourish in Katie Meier’s program.  Harris is a wiry athlete with the ability to play both forward spots during her college career.  She is good enough with the ball in her hands to create her own shot and athletic enough to create matchup problems.” – Keil Anthony Moore, Prospect Nation

Davenport, a 6-2 forward from Tucker HS is ranked as the 22nd best forward in the country according to ESPN HoopGurlz. Davenport will join the Hurricanes in the 2013-14 academic year with numerous accolades under her belt, both on and off the court. Davenport was named all-state in her sophomore and junior seasons, and was the 5-A Georgia Player of the Year in 2013. Off the basketball court, Davenport was the junior class president and a member of Cupcake Club (volunteer organization), beta club, and a member of the volleyball team in her junior and senior year.

“As the years have gone on at Miami, we’ve been known for signing some kids that were a little bit under the radar—maybe a little underrated and then they get to Miami and we make them an All-ACC player, and I won’t be surprised if Erykah Davenport turns into one of those as well. She was heavily recruited, but we do believe that she’s got an amazing work ethic and an incredible basketball IQ. She can hurt you at the high post and the low post. She brings a very versatile skill set on the offensive end then she’ll put a body on somebody on the defensive end and bring a real physical presence to us that we desperately need down here. She’s a great kid—been very well-coached, and we welcome her to the family.” – Miami head coach Katie Meier

“If you’re looking for an athletic interior player that plays the game the way it is supposed to be played, then the 6-1 Davenport is your prospect. She has a long, athletic body with long arms that take up space in the lane. Davenport plays a very aggressive game at both ends of the court. She has a nice low-post game and finishes well in the paint or gets to the line where she is a good free-throw shooter. She also showed that she has a smooth face-up game. Davenport used her long arms and good leaping ability to dominant the boards. Defensively she defended the low post and perimeter extremely well with a fearless, reckless abandon, blocking several shots. She played a very mature game and is an excellent young prospect.” – Prentice Beverly, HoopGurlz

“Erykah Davenport of Decatur, Ga., is one of the better athletes in the 2014 class nationally and has really blossomed into an impressive college prospect throughout her high school career.  Davenport will make an impact as a rebounder on day one and right now her offensive game isn’t too far behind.  With the addition of Davenport, Miami has a player who could flirt with numerous double doubles throughout her college career.” – Keil Anthony Moore, Prospect Nation

Prather, a 6-1 forward from Baltimore, Md., is another big in the Hurricanes’ signing class. Prather led the North Point Eagles to a 27-0 record and a 4A State Championship in 2013 while averaging double-double totals of 12 points and 12 rebounds. Prather was named All-SMAC First Team and all-county first team in addition to being a member of National Honor Society.

“Khaila Prather is that athlete, that greyhound, that multi-dimensional, long rangy, athletic player that we’ve built our program on. She spends a lot of time in the air, she gets her hands on every ball, and she does a great job rebounding—especially attacking the offensive glass with a passion—and just runs and runs and runs. I think her speed, her athleticism, her quickness, and her defensive presence will probably be the first thing you notice about her. I think as her career develops at Miami, she will also bring us a tremendous offensive game. I’ve never seen a kid hunt offensive rebounds as quickly and as aggressively as Khaila. It fits right into our system.” – Miami head coach Katie Meier

“Forward Khaila Prather of Baltimore, Md., is a wiry athlete with the ability to block shots and rebound the basketball.  Prather’s an excellent fit at the University of Miami, as she plays the game in the same mold of previous players such as Morgan Stroman.  Her ability to guard around the rim yet still keep up with the guards in transition should help her fall perfectly into place very early in her college basketball career.” – Keil Anthony Moore, Prospect Nation

Jones, the Hurricanes’ lone junior college signee, is a 6-2 forward out of Palm Beach State College. As a senior at Rogers High School, she led the team to an Oklahoma state championship.

“Ashley Jones was a big-time prospect out of high school. She’s a space eater, has great size, amazing hands, great passing ability, and also is very versatile. She can certainly secure the block down low, but she extends her game with great shooting touch. She will be one of the best passers on our team. We will only have her for two years but I think she will come in and have an immediate impact and really be a head-turner. I think shell be one of the most anticipated recruits we’ve had in terms of being able to come in and have a dramatic impact on day one.

“A left handed power-post needed to bring immediate production upon arrival.  Somewhat of a secret to many, having been injured during 2012-13 at Palm Beach State.”