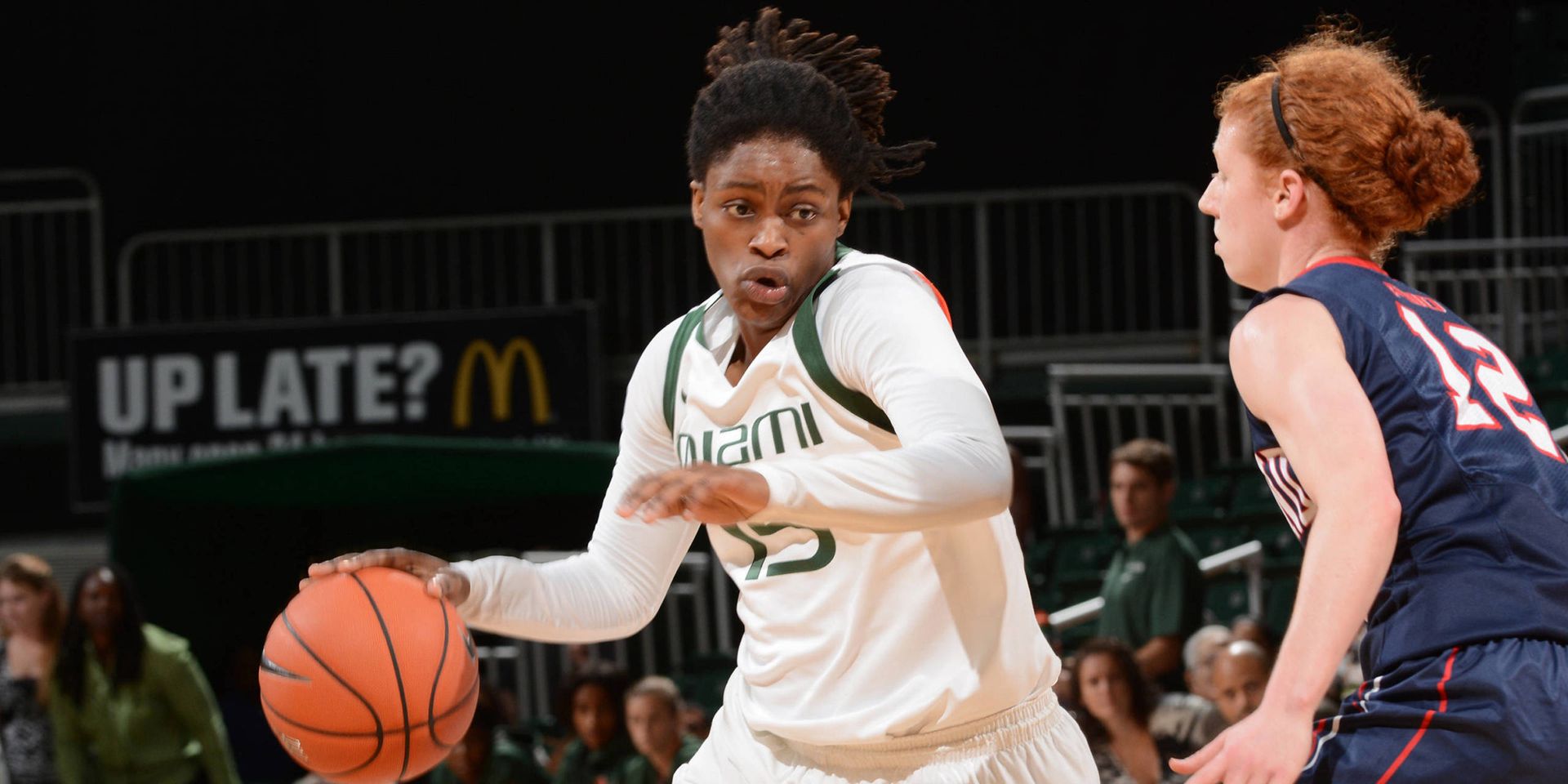 CORAL GABLES, Fla. — Despite a career-high 14 points from junior Necole Sterling, the Miami Hurricanes fell to visiting Richmond 57-50 Sunday afternoon in a rare home loss at the BankUnited Center.

A thrilling comeback effort from the Canes, faced with a 16-point deficit with 3:32 remaining, came up just short. Miami ripped off a 12-2 run beginning with a Sterling layup to cut the lead to 56-50 with 53 seconds to go. A late turnover and missed jumper halted the comeback, however, sending the Spiders to their first win over Miami in the series history.

“We talked about it before the game. As a staff, we were preparing for this to be a dogfight,” Meier said. “I was very blunt with the team. I said, ‘When the other team is on an 8-0 run, who is going to emerge?”

Oftentimes that answer was Necole, who continued her success from Friday’s season-opening win over UNF to Sunday’s disappointing defeat. The loss was just the fourth in Miami’s past 57 games at home, a stretch spanning over three seasons.

After falling behind in the opening minutes of the contest, Meier wasted little time in summoning her top reserves. Sterling, freshman Jessica Thomas and junior Jassany Williams came off the bench to reel off Miami’s next 11 straight points, with a layup from Williams at 11:19 tying the game 13-13.

Paced by seven first-half points from Sterling and a four-point, six-rebound effort from Williams, the Hurricanes entered the locker room trailing 29-23.

“I was happy with Necole,” Meier said. “I thought she battled and played really, really hard. Between Necole and Jass, to have 24 points – half of our points from two players off the bench, that’s encouraging.”

Miami and Richmond traded buckets to start the second half, with another three from Sterling at 12:50 cutting the deficit to three at 35-32.

The Spiders maintained their control, however, with a three-pointer from Kristina King upping their lead to six points at the 12:00 mark. Richmond extended its lead to 10 on a layup from Lauren Tolson at 7:37, forcing Meier to call a timeout. Back-to-back buckets from Spiders freshman Olivia Healy pushed the visitors to their highest lead of the night at 14 points just less than five minutes remaining.

Miami responded, with Sterling’s layup the first sign of late life for the hosts. Five straight points from Thomas, including a three-pointer, and a three point-play from Suriya McGuire cut the deficit to 56-50 in the closing minute.

That was as close as Miami would get, however, as a turnover from freshman Adrienne Motley and a free throw from King helped ice the Spiders victory.

“We can’t come out of this thing and hide, and come out looking for excuse,” Meier said. “We absolutely have to play harder though. We have to take more responsibility in our roles.”

Despite the loss, Meier was encouraged by her team’s effort in the closing stages.

“It’s there. We have it. We have to bottle it up and play that way for 40 minutes. My teams always play hard and always play tough, and next time we take the floor, we will.”