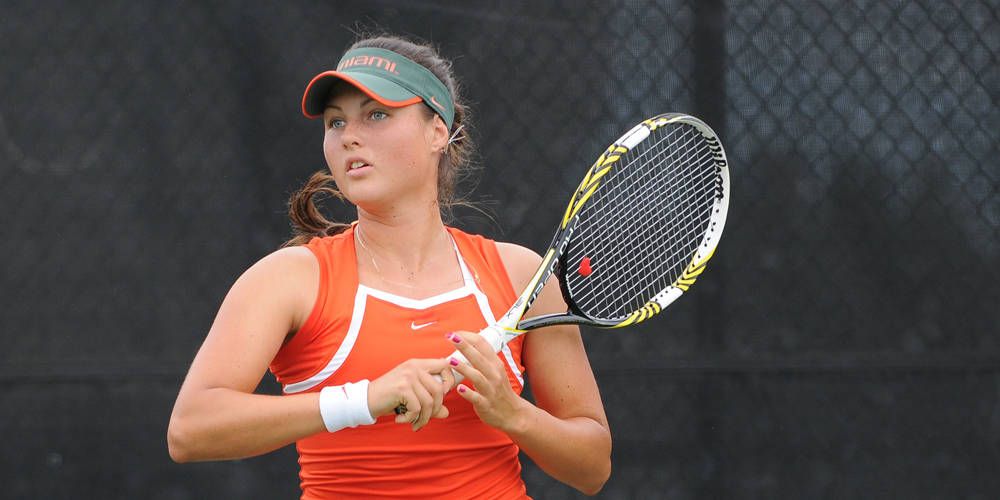 CORAL GABLES, Fla.—On a busy Saturday at the Neil Schiff Tennis Center on day two of the University of Miami Invite, the Canes’ doubles teams shined in wins in both the orange and green doubles final and the green consolation final

In the first doubles final of the day, the Canes 27th-ranked duo featuring Monique Albuquerque and Clementina Riobueno opened play with a hard-fought win over 24th-ranked Caroline Rohde-Moe and Marija Milutinovic of Ole Miss 8-4 to win the orange final. In the green doubles draw, Kelsey Laurente and Melissa Bolivar defeated Purdue’s Nicole Robinson and Claudia Escribens 8-0 in the final to claim the Canes’ second finals win of the tournament.

52nd-ranked Wagner cruised through play on Saturday, picking up two singles wins over Barry’s Karina Goia, 6-4, 0-6, 6-1, and Purdue’s Mara Schmidt. The victories for Wagner put her in the orange singles final tomorrow morning at 10 a.m.

Riobueno, ranked No. 69 in the preseason rankings, prevailed in a grueling three-set match against Barry’s Obanda in the consolation quarterfinals on Saturday, 6-4, 5-7, 6-4. With very little time to rest, Riobueno then came back and defeated Auburn’s Michala Kucharova 6-4, 7-6 to book her spot in the consolation final on Sunday.

No. 54 Laurente also found herself in a back-and-forth three-set match, but Purdue’s Schmidt came up on the winning end, defeating her 5-7, 6-4, 6-3. Laurente bounced back in her next match though, defeating Barry’s Karina Goia 6-4, 7-5. Laurente will play for fifth place in the orange singles flight tomorrow.

In her first singles match of the day, Bolivar handled Ole Miss’ Marija Milutinovic 6-3, 6-4 before being matched up against her teammate Brittany Dubins in the semifinal. Bolivar had little trouble with Dubins, beating her 6-1, 6-1 to advance to the green singles final. Dubins opened up singles play Saturday with a win over Akemi Maehama of Barry 6-2, 6-0 to force the match against Bolivar.

Still in her first tournament of the fall season, 84th-ranked Lileikite has played sound tennis and certainly continued that today, winning two matches to punch her ticket to the green singles final on Sunday morning. Lileikite defeated Jackie Kasler 6-1, 6-4 in the quarterfinals and wasted little time in the semifinals, beating Barry’s Cristina Valladares 6-2, 6-2. Lileikite will face off against her teammate Bolivar for the green singles championship at 10 a.m. on Sunday.

Suarez, a sophomore from Weston, Fla., was defeated in three sets by Purdue’s Krisztina Kapitany in the quarterfinals of the green singles flight. In her second match, she made fairly easy work of Iris Verboven of Ole Miss, beating her in straight sets 6-4, 6-3.

The final round of singles for the Miami Invite will get underway at 8:30 a.m. on Sunday. The green and orange finals as well as the consolation finals will all be played at 10 a.m.