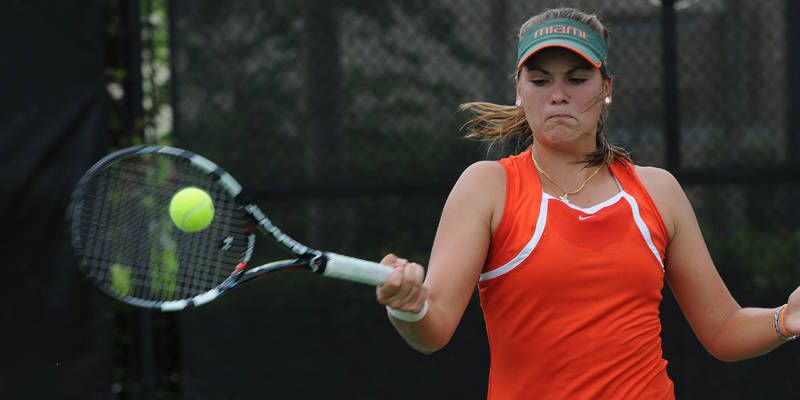 LOS ANGELES –The Miami Hurricanes women’s tennis team came away with three victories on Tuesday at the ITA/Riviera All-American Championships—with all three coming against ranked opponents.

Monique Albuquerque and Clementina Riobueno got the day started on the right foot, defeating 35th-ranked Melissa Kopinski and Allison Falkin in the second round of qualifying doubles. The 27th-ranked doubles team for the Hurricanes made fairly easy work of the Illini duo, beating them by a score of 8-2.

“Monique and Clementina were the stronger team, and were able to show that with consistency and determination,” assistant coach Laura Vallverdu said. “They keep discovering things as a team every day—which is a great thing.”

Not long after, Stephanie Wagner and Kelsey Laurente kept the momentum going with a consolation doubles win over 32nd-ranked Elisha Gabb and Cierra Gaytan-Leach. Wagner and Laurente, ranked No. 52 in the doubles preseason poll, set the tone for the match very early on and never looked back against the pair from Missouri.

With the win for Albuquerque and Riobueno earlier in the day, they advanced to the third round of qualifying doubles against No. 19 Brynn Boren and Zoe Kats from USC. The Trojans got the best of the Hurricanes duo, eliminating them from the tournament with after an 8-4 result.

“Monique and Clementina were able to get the match to a point where it could’ve fallen to either side of the net, but they were not able to finish volleys with authority and it cost them a few games,” Vallverdu said. “They need to improve on some weaknesses that were exposed this weekend in order to continue developing into an established doubles team.”

On the singles end, 52nd-ranked Wagner continued with the momentum that was established on Tuesday, and battled to a three-set win over Tulane’s Klara Vyskocilova. Wagner, coming into the match ranked one slot ahead of the 53rd-ranked Green Wave player, prevailed 6-2, 4-6, 6-4.

“Stephanie has just been better than her opponents the past two days,” Vallverdu said. “She needs to continue working towards reaching her full potential as a complete athlete.”

After knocking off 34th-ranked Beatrice Gumulya on Tuesday evening, Laurente faced another difficult test against No. 58 Stephanie Nauta of Virginia. Laurente came up on the short end of the this consolation singles match, falling 6-2, 6-4.

The Hurricanes will now head back to Coral Gables and begin preparations for the University of Miami Invite which is scheduled for Oct. 11-13.