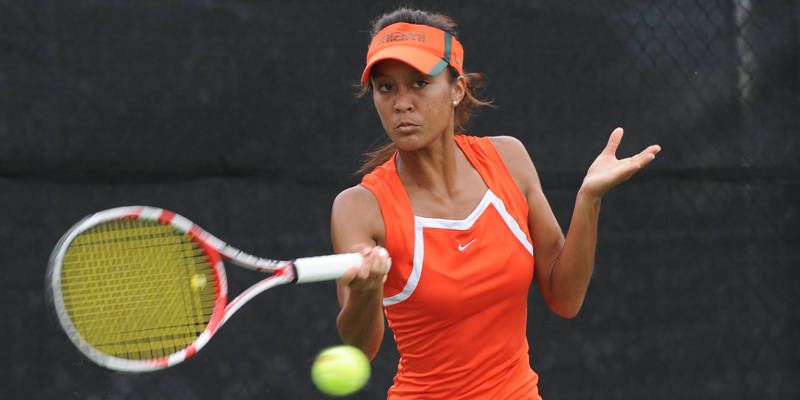 Laurente Shines in Win Over No. 34 Gumulya

LOS ANGELES –The Miami Hurricanes women’s tennis team picked up three wins on the first day of qualifying singles and doubles at the ITA/Riviera All-American Championships on Monday.

Most notably, No. 54 Kelsey Laurente came up with a big win in her consolation match against 34th-ranked Beatrice Gumulya of Clemson. Laurente defeated her 6-1, 6-3, adding a signature win to her fall resume.

After coming up just short in a tough first round matchup against No. 65 Ruth Seaborne of Iowa, Laurente was able to clear her mind and gut out a win against a quality opponent.

“I was impressed with how Kelsey was able to reset and turn around to play a solid mental match in just 90 minutes after she came off the court in her first match,” Vallverdu said. “She is a very tough opponent when she is able to do that.”

On the doubles end, 27th-ranked Monique Albuquerque and Clementina Riobueno defeated Catherine Harrison and Morgan Thomas of UCLA by a score of 8-5 in the opening round of qualifying doubles.

“Clementina and Monique came out as the solid team they are on the doubles court and played a clean match until the end, assistant coach Laura Vallverdu said.”

52nd-ranked Wagner faced a difficult first round opponent in North Carolina’s freshman Jamie Loeb, who was able to defeat her 6-2, 6-0.

Wagner also was able to prevail in her consolation match, defeating Missouri’s 72nd-ranked Cierra Gaytan-Leach. Wagner was able to assert her dominance early on and never looked back, winning the match 6-2, 6-2.

Riobueno, facing a difficult opponent in Oklahoma’s No. 47 Hermon Brhane, was defeated 6-4, 6-2 in her second singles match of the day.

The Hurricanes will get right back out on the court on Wednesday with doubles beginning at 1 p.m. and singles getting underway at 4 p.m.