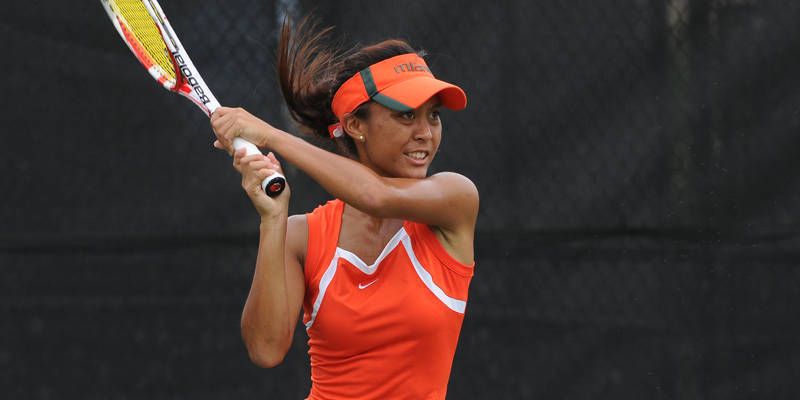 LOS ANGELES – The University of Miami women’s tennis team played its first match at the 2013 ITA/Riviera All-American Championships on Sunday. Playing in the second round of prequalifying doubles, Kelsey Laurente and Stephanie Wagner defeated Tulane’s Klara Vyskocilova and Ipek Birol by a score of 8-6.

“Stephanie and Kelsey are playing very good doubles at an early stage in the year, which is what top tier teams do best—play great tennis in the fall,” assistant coach Laura Vallverdu said. “They were both able to expect the win through thick and thin, which allowed them to perform at a high level.”

Vyskocilova and Birol went 5-5 in the spring of 2013 playing primarily as the No. 1 doubles team for the Green Wave. Wagner and Laurente proved to be too much to handle though, overpowering their opponent in some key games.

“Steffi and Kelsey were able to overpower their opponents from the back on a consistent basis,” Vallverdu added. “They have become a very solid team from the baseline. Kelsey took it to them at the net and was working on owning the court.”

Just hours later in the third round of prequalifying doubles, 52nd-ranked Laurente and Wagner fell to North Carolina’s Jamie Loeb and Hayley Carter in a tiebreaker, 8-7.

“They played great tennis in the third round throughout the entire match,” Vallverdu said. “It was a shame that they were not able to convert some key games.”

Wagner and Laurente will play in the doubles qualifier due to a rules technicality. One of the teams that was slotted to play in qualifying doubles backed out of the tournament, and because Laurente and Wagner were the highest seeded prequalifying team to fall, they will replace the team that dropped out.

“As Stephanie and Kelsey move forward in the tournament, they need to believe and expect to win when others expect them to back down,” Vallverdu said. “They have to believe in themselves when the odds are against them and when they are in the lead.”