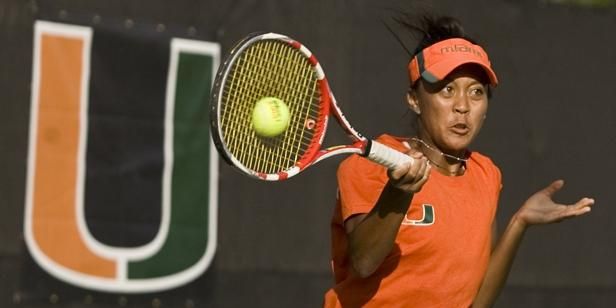 “We improved this weekend,” head coach Paige Yaroshuk-Tews said. “We learned to compete a little more independently and showed some great things.”

54th-ranked Laurente kept her fall record unblemished on Sunday as she was crowned champion of the blue women’s singles bracket. Facing 33rd-ranked Whitney Kay of North Carolina in the finals, Laurente prevailed in straight sets, 7-5 and 6-4.

“Laurente is showing that she’s ready to make a statement,” Yaroshuk-Tews added. “Her focus was incredible, and with continued preparation on a daily basis kept at a high level, Kelsey can do some pretty special things in collegiate tennis.”

Rattling off her third consecutive win was junior Monique Albuquerque. In the consolation final of the white singles bracket, Albuquerque lost the opening set to Danielle Spielmann of Alabama, but battled back to win the next two by scores of 6-3 and 6-2.

“I’m really fired up with Monique’s progression,” Yaroshuk-Tews said. “We still need to press, but what a great beginning to the season.”

No. 52 Stephanie Wagner defeated Ole Miss’ Erin Stephens in the third place match of the black singles bracket. Coming off of a loss in the semifinals, Wagner showed great resiliency—winning in straight sets, 6-2, and 6-1.

“Wagner is one of the top competitors in the game,” Yaroshuk-Tews said. “Once she makes a decision to allow her physical strengths to be used as assets, nothing will stop her.”

The Hurricanes will return to action on Saturday, Sept. 28 when they travel to the ITA Women’s All-American Championships in Pacific Palisades, Calif.