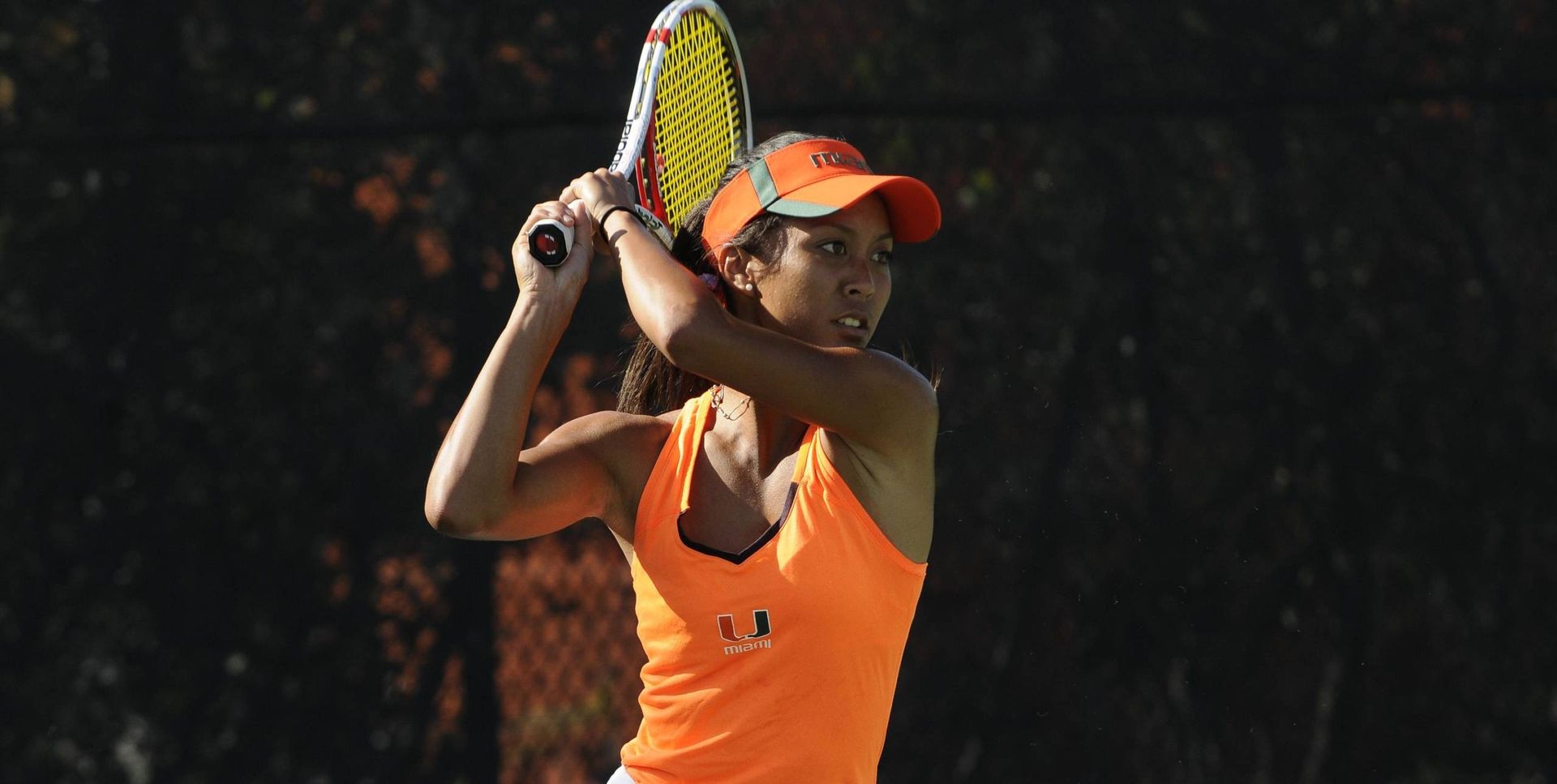 CARY, N.C. – The University of Miami women’s tennis team opened fall play on Friday at the Duke Fab Four. In Day 1 back on the courts, the Hurricanes won two singles matches and a pair of doubles matches.

“It is nice to get back to competition at this level early in the season,” head coach Paige Yaroshuk-Tews said. “We had some great tennis today—some on our side of the net and some on the other side.”

Stephanie Wagner, ranked No. 52 in the ITA Preseason Rankings, opened up with a win over Ole Miss’ Julia Jones in the black singles bracket. Winning 6-2, 6-2, Wagner had little trouble putting away Jones—who finished 2013 ranked No. 12 in the ITA South Region rankings. Wagner advances to the quarterfinals where she will play Maria Belaya of William & Mary on Saturday.

Coming into the tournament ranked No. 54, Kelsey Laurente opened up play against 115th-ranked Stefanie Hristov of Texas A&M. In a competitive match, Laurente bested Hristov, 6-5, 6-3. In Saturday’s quarterfinals of the blue bracket Laurente will play Ratnika Batra from Texas.

The two other Hurricanes competing, Monique Albuquerque and Clementina Riobueno, both dropped their round of 16 matches. Albuquerque, with a tough draw, came up short against No. 10 Breaunna Addison of the University of Texas. Riobueno fell in her match, 6-2, 6-1, to Jamie Loeb of North Carolina.

Miami’s experienced duo of Albuquerque and Riobueno showed very quickly why they are the No. 27 ranked doubles team in the country, downing North Carolina’s Laura Slater and Katie Vialle by a score of 8-4 in the white doubles quarterfinals.

In the doubles semifinals, Albuquerque and Riobueno handled Alabama’s Carmen Blanco and Emily Zabor, also by a score of 8-4. Albuquerque and Riobueno advance to Saturday’s white doubles finals where they will see William & Mary’s Maria Belaya and Jeltje Loomans. Belaya and Loomans had no trouble with their first opponents, Kanyapat Narattana and  Carla Tur Mari of Oklahoma State, winning the match 8-2. In their semifinals matchup, Balaya and Loomans edged out Texas A&M’s Rutuja Bhosale and Ines Deheza by a score of 8-7.

Ranked No. 52 in the preseason doubles rankings, Miami’s second doubles team consisting of Kelsey Laurente and Stephanie Wagner fell in the quarterfinals to Florida’s Olivia Janowicz and Kourtney Keegan by a score of 8-2.

In the consolation semifinals of the blue doubles bracket, Miami’s Laurente and Wagner had the misfortune of being matched up against the No. 7 doubles team in the nation, Texas A&M’s Stefania Hristov and Cristina Stancu. The Texas A&M twosome narrowly beat out the Hurricanes by a score of 8-6.

“I’m proud of the way we competed and I hope for the same tomorrow,” Yaroshuk-Tews added.

The team will get right back in action tomorrow for the second day of the tournament. Riobueno and Albuquerque will play their white doubles final at 9:30 a.m. and singles play will begin at 11:30 a.m.