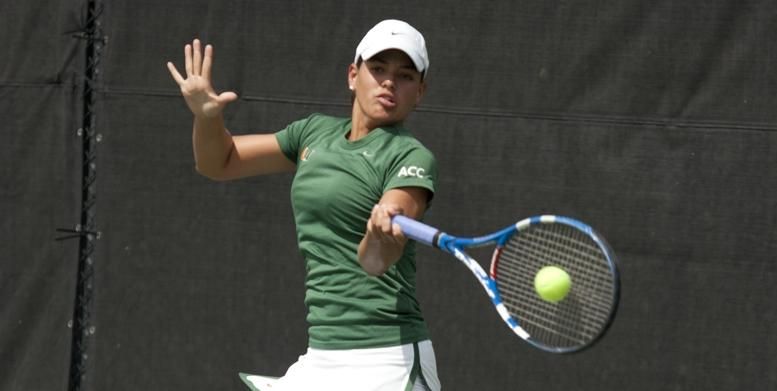 WEYMOUTH, Mass. –Nine. That’s the number of consecutive matches the 10th-ranked University of Miami women’s tennis team has won after its 6-1 trouncing of Boston College on Saturday at the Weymouth Club.

After taking the doubles point for the 10th straight match, the Canes (15-3, 6-1 ACC) won five of the six singles matches, cruising to the win.

“Boston College was coming off a big win yesterday against Florida State, so we knew momentum was key,” said UM head coach Paige Yaroshuk-Tews. “We played in a difficult environment and were able to keep our cool.”

As was the case on Friday at Maryland, the Hurricanes eldest player, junior Melissa Bolivar clinched the match with a 6-1, 7-6 victory over the Eagles’ (8-6, 2-5) Wan-Yi Sweeting.

Singles opened with quick wins from 104th-ranked Stephanie Wagner at No. 1 (6-4, 6-3) and 122nd-ranked Clementina Riobueno at No. 6 (6-2, 6-2). Both wins for Wagner and Riobueno were each players team-leading 18th singles victories of the season.

For the second time in as many days, the Canes’ highest-ranked tandem of Lina Lileikite and Stephanie Wagner (No. 31) were unable to close out their opponent (1-8). However, the teams on courts two and three were able to secure the doubles point for Miami for the 10th straight match.

Out of the No. 3 doubles position, Bolivar and Kelsey Laurente cruised to an 8-2 win, setting up a thrilling match at No. 2 that would decide the point. Riobueno and Albuquerque battled the Eagles’  Sweeting and Salonen to a tie-breaking 8-7 (3) victory.

“Managing these matches was important and we did a great job of that today,” said Yaroshuk-Tews. “We have a lot of variety and when inside its important that we use it and not start playing out of our style.

“I’m looking forward to getting home and preparing for North Carolina and Duke.”

To date, the Hurricanes will face their most important weekend of the regular season when they welcome the nation’s top-ranked North Carolina team to the Neil Schiff Tennis Center on Friday. Two days later, UM will see the No. 6 Duke Blue Devils visit Coral Gables.