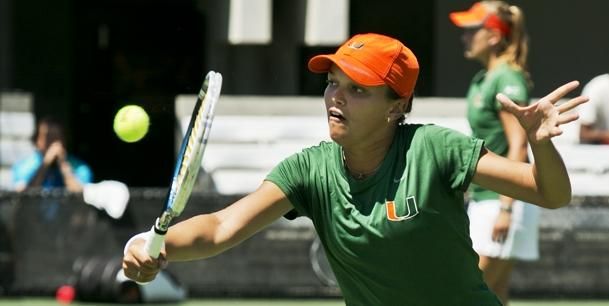 CORAL GABLES, Fla. –The 10th-Ranked University of Miami women’s tennis team cruised to its third consecutive 7-0 victory on Friday over the Terrapins (5-10, 0-5 ACC) at the University of Maryland Tennis Courts.

“We played a clean match today,” said Paige Yaroshuk-Tews. “We need to stay focused, get to Boston and have a strong outing tomorrow.”

After a win by Melissa Bolivar and Laurente at No. 3 doubles (8-3) and a Maryland withdrawal on court No. 2, Miami clinched the doubles point for the ninth straight match.

Riobueno won the first singles match of the day, defeating Nataliya Bredikhina, 6-3, 6-0. The win was the seventh in a row for the Barquisimeto, Venezuela native and ties her with Wagner for the team lead with 17 singles wins.

Sophomore Lina Lileikite pushed the UM lead to 3-0 with her dominant, 6-1, 6-0 win over Olga Gaistruk and junior Melissa Bolivar clinched the UM victory with a win over Gabriela Srodowski on court No. 6, 6-3, 6-2.

A win from Laurente pushed the Canes lead to 5-0, before Monique Albuquerque extended it to 6-0 with a 6-2, 6-4 win over Olga Bredikhina.

Albuquerque, a native of Porto Alegre, Brazil has played well after beginning her Miami career with five singles losses. Since, the sophomore has won five of her last six matches.

Wagner closed out the match and remained flawless at No. 1, winning her fourth consecutive match out of that position, 7-5, 6-2, over the Terps’ Vroni Van Berlo.

Miami will face Boston College on Saturday at 4:30 p.m. Due to facility issues, the match has been moved to the Weymouth Club in Weymouth, Mass.