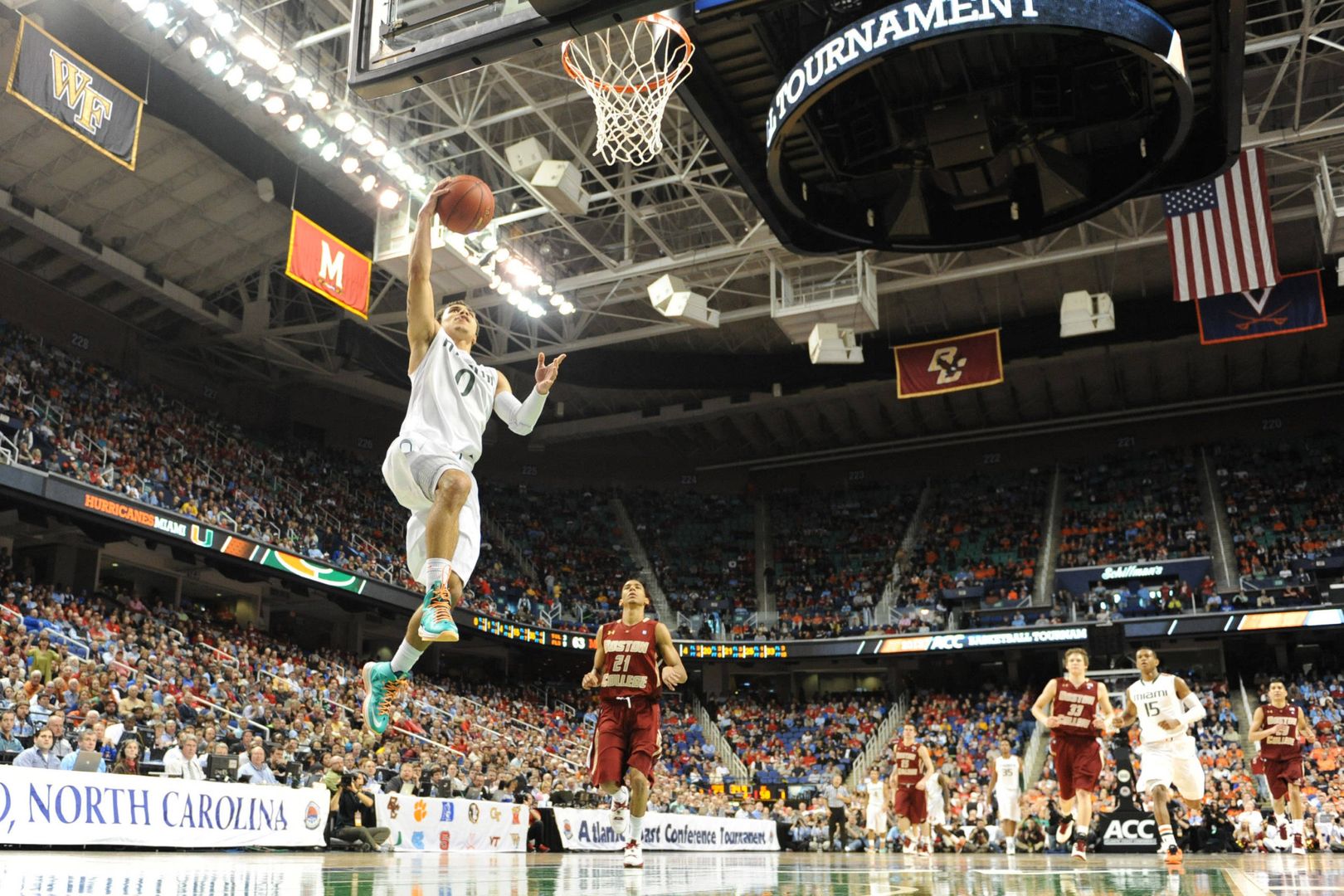 GREENSBORO, N.C. (AP) – Shane Larkin scored 20 points and No. 9 Miami pulled away to beat Boston College 69-58 on Friday in the quarterfinals of the Atlantic Coast Conference tournament.

Miami withstood a serious scare from eighth-seeded BC (16-17), letting an early 13-point lead disappear before making all the plays down the stretch to avoid becoming the ACC’s first No. 1 seed to lose its tournament opener since 1997.

Patrick Heckmann finished with 15 points for the Eagles, and his 3-pointer with 3 1/2 minutes left tied it at 55.

Durand Scott put Miami in front to stay with two free throws with 3:01 left, and Larkin took over a few moments later.

Larkin came up with a key steal, then buried a momentum-shifting 3 off an inbounds pass to make it 60-55 with 1:49 left.

After Rion Brown swished a pretty hanging jumper with 57.6 seconds left, and Kadji added a free throw to make it 63-55, BC didn’t get closer than five points the rest of the way. McKinney Jones punctuated the victory with a dunk with 17.2 seconds left.

Larkin also keyed the defensive effort on BC guard Olivier Hanlan, who a day earlier set an ACC tournament record for freshmen with 41 points in the first-round win over Georgia Tech.

Hanlan finished this one with 14 points on 5-of-10 shooting, missing 5 of his final 6 attempts after making 16 consecutive shots over two days. His streak ended when his 3-pointer over Larkin hit off the rim with just under 14 minutes left.

Ryan Anderson also had 14 points for the Eagles, who had their ACC-best four-game winning streak snapped and were denied their first semifinal appearance since 2007.

They lost twice to Miami during the regular season in vastly differing ways: The Hurricanes romped by 32 points in Coral Gables a few weeks after holding on for a one-point win at BC.

And for a while, this one looked like a repeat of that blowout – at least until BC dug itself out of a double-digit hole for the second straight day.

After rallying from 15 points down to beat the Yellow Jackets in the first round, the Eagles spotted Miami a 21-8 lead before closing the half on a 19-4 run and took its first lead when Anderson’s layup with 4 seconds left made it 27-25. That coincided with a brutally cold spell for Miami, which missed 14 of its last 16 shots of the half.

BC stretched its lead to 30-25 on Heckmann’s 3-pointer 20 seconds into the half. Miami eventually countered with an 11-2 run and took a 48-44 lead on Larkin’s deep 3, and things remained tight until Larkin and the Hurricanes finally pulled away.

Game Notes  for Unviersity of Miami vs. Boston College on March 15, 2013

With Miami’s 69-58 win over Boston College, the Hurricanes set a new school record for single-season victories, posting their 25th win over the season.

Miami improved to 18-24 all-time against Boston College, dating back to the 1962-63 season. The Canes’ win was their first on a neutral court against the Eagles, while extending their series winning streak to seven games.· Miami improved to 8-8 all-time in the ACC Tournament and advanced to the semifinals for only the second time since joining the ACC in 2004.

With Miami’s win over Boston College, No. 1 seeds improve to 36-2 all-time against No. 8 seeds in the ACC Tournament.·

Head coach Jim Larrañaga improves to 515-353 overall record and is 45-19 in his second season at Miami.·

One day after he scored an ACC Tournament record 41 points, Miami held Boston College freshman Olivier Hanlan to 14 points on 5-of-10 shooting.·

The Hurricanes who trailed 27-25 at the half, improve to 7-3 on the season when trailing at halftime.·

Miami who shot 33.3 percent and connected on eight 3-pointers improves to 14-2 when outshooting their opponent.·

Shane Larkin finished the game with a team-high 20 points and 4 assists; he has posted 7 straight games with 10+ points and 3+ assists.·

Larkin, who played in his third career ACC tournament game, has reached double figures in all three game, averaging 16 points in those contests.·

Kenny Kadji recorded his fourth straight double-double and eighth of the season, finishing with 15 points and 11 rebounds.·

Every Hurricane that entered the game recorded at least one rebound.·