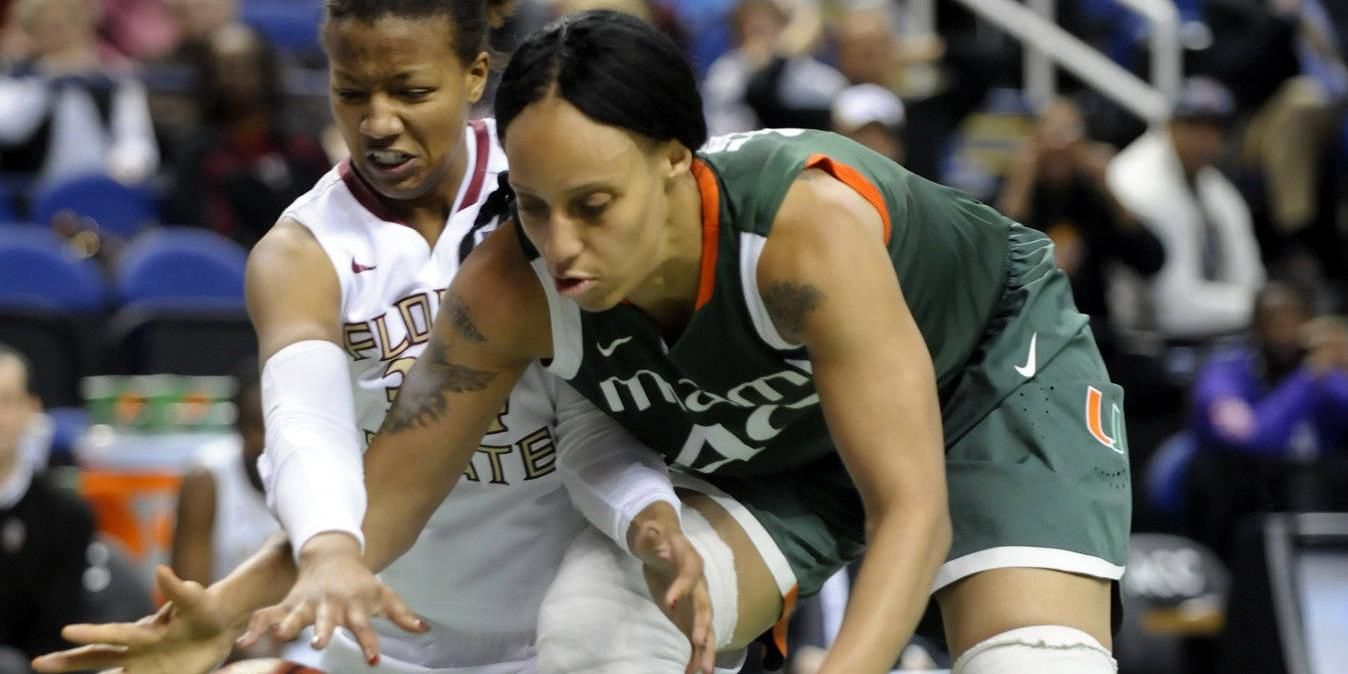 GREENSBORO, N.C. — Shawnice Wilson had 18 points and a career-best 18 rebounds for the Hurricanes, but Alexa Deluzio scored 11 of her 19 points in the final six minutes to lead No. 23 Florida State past Miami 70-58 on Friday in an Atlantic Coast Conference quarterfinal.

Chelsea Davis added 15 points and Yashira Delgado had 12 for the fourth-seeded Seminoles (22-8). They won their first ACC tournament game since 2009 – also the last time they reached the semifinals.

Deluzio followed by hitting two sets of free throws to put Florida State up by eight. Her 3-pointer with 3:45 left then stretched the lead to 57-48 and the Seminoles made their free throws from there.

Morgan Stroman added 12 points and 12 rebounds for Miami, her eighth double-double of the season.

The Series
Florida State and Miami met for the 44th time in program history Friday, with the Seminoles owning the overall series, 33-11. In the two regular season meetings, Florida State went 2-0 against the Hurricanes, winning by an average of 18.0 points per game.

Game Notes
• First meeting between Miami and Florida State in the ACC Tournament.

Florida State (22-8, 11-7 ACC)
• Florida State is now 18-0 when four or more players score in double ﬁgures.
• The Seminoles advance to the semiﬁ nals for the third time in program history (2001, 2009).
• With ﬁve dimes Friday, Junior Cheetah Delgado now has 134 career assists – which moves her into ninth place on the Seminoles all-time list.
• Senior Chelsea Davis scored 15 points, the 41st time in her career that Davis scored in double ﬁgures.
• Morgan Toles grabbed a career-high tying eight rebounds Friday
• At the 10:06 mark in the ﬁ rst half, Chasity Clayon became the 29th Seminole ever to score 1,000 points… She scored 10 points today…Clayton hadn’t scored since injuring her ankle at North Carolina on Jan. 31.
• Cheetah Delgado scored 10 points – her second double ﬁ gure scoring game of the season…Delgado’s three highest scoring games this season all came against Miami (she had 14 at Miami and nine in Tallahassee against the Hurricanes).
• First Team All-ACC selection Leonor Rodriguez has now scored 47 combined points in the three meetings with Miami this season.

Miami (21-10, 11-7 ACC)
• First Team All-ACC selection Morgan Stroman notched her team-leading ninth double-double of the season after posting 12 points and 12 rebounds. Stroman now has double-digit rebounds in 12 games this season.
• After dominating the paint against Virginia Tech Thursday (17 pts, 8 reb.), senior Shawnice Wilson scored 18 points and grabbed a career-high 18 rebounds to post her seventh double-double of the season, and her fourth double-double in the last six games.
• Wilson’s 18 rebounds puts her for in a tie for fourth on the ACC Tournament’s all-time list and sets a new Miami ACC Tournament record for rebounds in a game. The Miami record was previously held by Shenise Johnson who had 14 boards in a 2012 semifinal matchup with North Carolina.
• After holding Virginia Tech to a ACC Tournament record for fewest points (39) and ﬁeld goal percentage (.269, 14-for-52) in the ﬁrst round, the Hurricanes defense allowed 70+ points for just the sixth time this season.