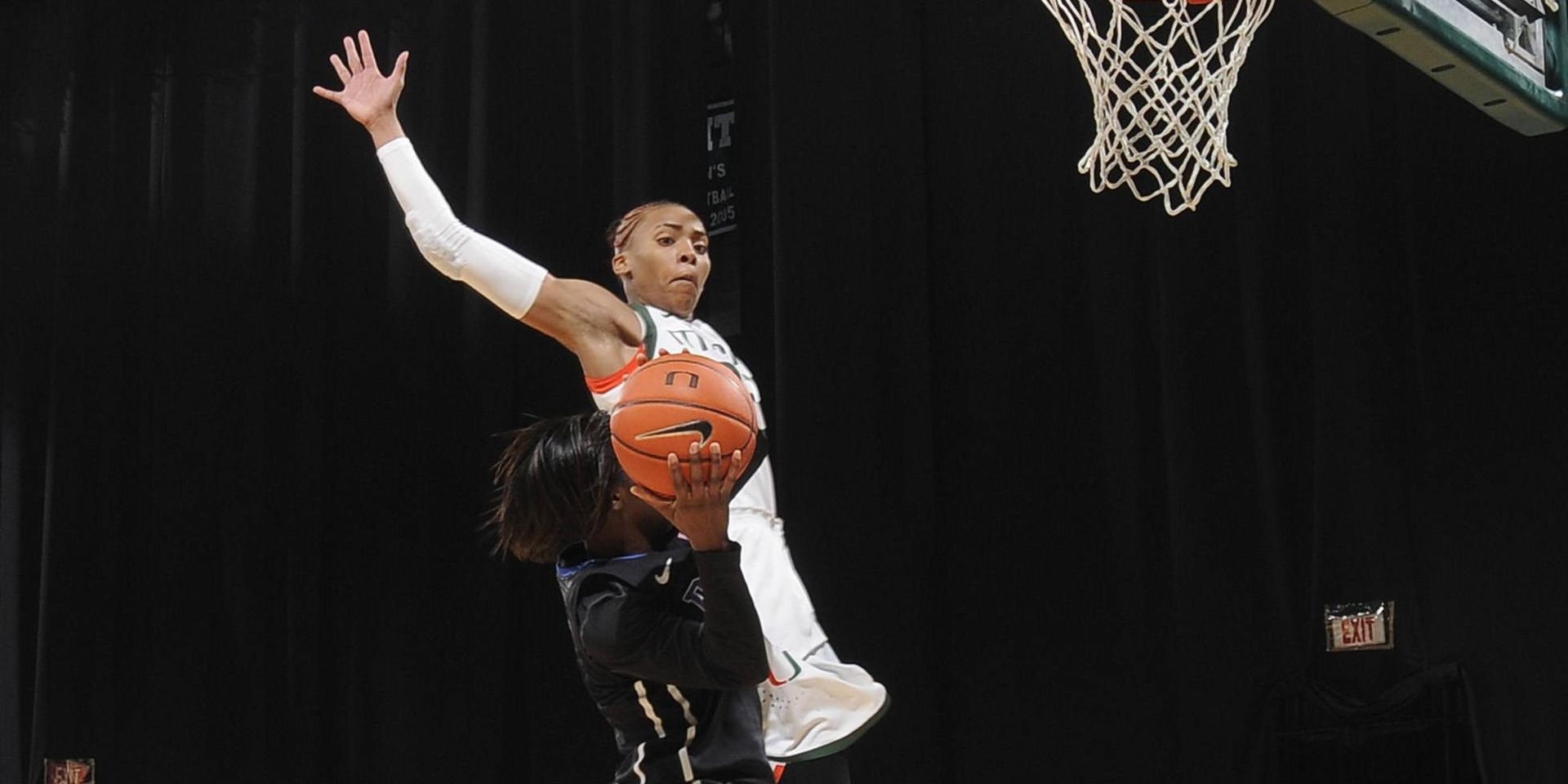 THE GAME
• Miami has defeated Virginia Tech twice this season, including this past Sunday when UM won in Blacksburg, 64-46.
• In Sunday’s game, Morgan Stroman recorded her eighth double-double of the season with 18 points and 15 rebounds.
• Also in Sunday’s game, Stefanie Yderstrom sank three three-pointers on her way to 13 points. Suriya McGuire had 12 points and Pepper Wilson had 11.
• The first matchup this season ended in a 68-42 victory for the Canes on Feb. 3.
• In that game, Miami held Virginia Tech scoreless from the beyond the arc and 31.4 percent shooting from the field.
• Also in that game, Michelle Woods poured in 15 points, including three 3-pointers and recorded six assists and five rebounds.
• Miami owns a 10-6 edge in the all-time series vs. the Hokies and has won the last four meetings.

OH WHAT A NIGHT
• On Senior Night (Feb. 28), the Hurricanes defeated No. 5/4 Duke.
• Duke was the highest-ranked team the Hurricanes have ever defeated.
• UM beat a Top-10 team for the second time, this season.  The Hurricanes topped then No. 6 Penn State on Nov. 29, 2012.
• Miami beat a Top-5 team for the first time since hosting Maryland on Jan. 12, 2012.
• Senior Pepper Wilson scored 16 points and has 12 rebounds. It was her third consecutive double-double and the seventh of the season for the center.
• Senior Stefanie Yderstrom poured in 16 points and had a season-high five rebounds.
• Senior Morgan Stroman scored 11 points to go with her six rebounds.
• UM’s three seniors accounted for 43 of the teams 69 points (62%) and 23 of its 40 rebounds (58%).
• Krystal Saunders set a career-high in free throws and free throw attempts as she went six for eight.  Her previous best game at the line was vs. Georgia Tech on Jan. 17 when she was four for six.
• Miami beat Duke for the first time in history.  The Canes were previously 0-10 against the Blue Devils.
• Katie Meier spent her college career at Duke (1986-90), it was her first win over her alma mater.

THE HURRICANES’ RESUME
• 20-9 overall record. 11-7 in ACC play. Fourth straight 20-win season.
• Currently receiving votes in the Associated Press poll.
• Ended the regular season in a fourth place tie in the conference standings with No. 23 Florida State.
• Defeated No. 5/4 Duke on Feb. 28. Highest-ranked team UM has ever defeated.
• Currently No. 48 in Realtime RPI.
• Currently No. 50 in NCAA RPI.
• Six of nine losses have come to teams with an RPI of 20 or better. Other three losses are at Rutgers (RPI – 72), at Virginia (RPI – 90) and at Georgia Tech (89).
• According to RealTimeRPI.com, great wins over Big Ten Champ Penn State (RPI – 5) and ACC Champ Duke (RPI – 6), good wins over Davidson (RPI – 88), Virginia (RPI – 90) and Georgia Tech (RPI – 89).
• Conference rankings according to RealTimeRPI.com and
WarrenNolen.com (Big 12, Big Ten, Big East, SEC, ACC).
• The ACC won the ACC/Big Ten Challenge, 7-5, this season.
Currently, the Big Ten is rated as the second best conference. Miami went 2-0 over Big Ten teams this season (Penn State, Wisconsin).
• A 9 seed in ESPN.com and College Sports Madness Bracketology.
• A No. 3 seed in each of the last two NCAA Tournaments.
• No bad losses according to RealTimeRPI.com (No losses outside of RPI of 90).
• Suffered through a four-game stretch (at No. 10 Maryland, at No. 18 FSU, vs. No. 11 UNC, at Wake Forest) when flu hit the team/coaches/support staff.

ALL-ACC PERFORMERS
• Morgan Stroman (Blue Ribbon Panel, ACC Coaches) and Stefanie Yderstrom (ACC Coaches) named First Team All-ACC this season.
• Shawnice Wilson was named ACC Player of the Week after leading Canes to win over No. 5/4 Duke, with her 7th double-double, and Virginia Tech (March 4).
• Morgan Stroman and Keyona Hayes were named ACC Player and Freshman of the Week, respectively (Feb. 11).
• It was the first time that Miami swept the weekly awards since Jan. 11, 2010.
• Stroman scored 24 points, grabbed a career high-tying 16 rebounds and led Miami with four assists at Clemson (Feb. 7).
• Stroman led UM with 16 points vs. No. 19 FSU (Feb. 10)
• Hayes averaged a double-double on the week with totals of 20 points and 20 rebounds. Her fourth double-double of the season came at Clemson, where she scored 12 pts. and grabbed 10 boards.

PEPPER TOO HOT FOR NC STATE TO HANDLE
• Shawnice “Pepper” Wilson has faced NC State 4 times since transferring to UM after her sophomore season.
• Averaged 11.5 points and 13 rebounds in those games.
•Then career-best 17 points and 17 rebounds at NC State as a junior.
•On the season, has reached double figure scoring in 15 games and double-digit rebounds in 10.
•Wilson has recorded a double-double in three of the last four games.
•Wilson was named the ACC Player of the Week for her performances against Duke and Virginia Tech to close out the season. It was her first ACC weekly honor.

BIG-TIME TEAM ON THE SMALL SCREEN
• 10 regular season games to be televised this season.
• Miami vs. Virginia Tech on March 7 in the first game of the ACC Tournament will be the 11th.

CANES HAND NO. 6 PENN STATE FIRST LOSS
• Then No. 6 Penn State fell 69-65 on Nov. 29 at the BankUnited Center for their first loss.
• Miami forced Lady Lions into 20 first-half turnovers.
• Stroman led the Canes with 15 points and 5 steals.
• Yderstrom and Woods added 13 and 11 points.
• 2nd-highest ranked team UM has ever defeated (No. 5 Maryland – 2012).
• Penn State went on to win the Big Ten regular season championship.

MEIER IN EIGHTH SEASON AT MIAMI
• Katie Meier and her staff are in their 8th year at the helm in Coral Gables.
• Four straight 20-win seasons for Meier and the Canes
• UM advanced to the NCAA tournament 2nd round for the 2nd
consecutive season in 2012
• Canes finished 2nd in ACC with a 14-2 record in 2011-12
• Miami finished with a 26-6 record.
• Meier has been named the head coach of the 2013 USA U19 team that will compete in the FIBA World Championships.

UM CLASS RANKED 11TH
• 3 high school standouts, Adrienne Motley (Newport News, Va.), Nigia Greene (Atlanta, Ga.) and Jessica Thomas (Gainesville, Fla.), each signed with the Canes.
• The trio will join the Hurricanes for the 2013-14 academic year.
•  Motley, a 5-9 guard from Woodside High, ranked No. 27 overall prospect and 7th best PG in the nation by ESPN HoopGurlz.
• Greene is a 4-star prospect according to ESPN HoopGurlz. Ranked No. 41 overall, and the 9th-best guard in the nation.
• Thomas ranked 48th best PG in nation by ESPN HoopGurlz. In 2011, the 5-6 guard led the Buchholz High to semifinals of the Florida Girls State Basketball Playoffs.
• Thomas recently led her team to the 7A state title and was named the tournament’s MVP.
• Younger sister of Hurricane football legend Lamar Thomas.
• All three members incoming class have been nominated to play in the 2013 McDonald’s All-American Game.

• Motley was one of 20 players named a 2013 WBCA High School All-America honorable mention.