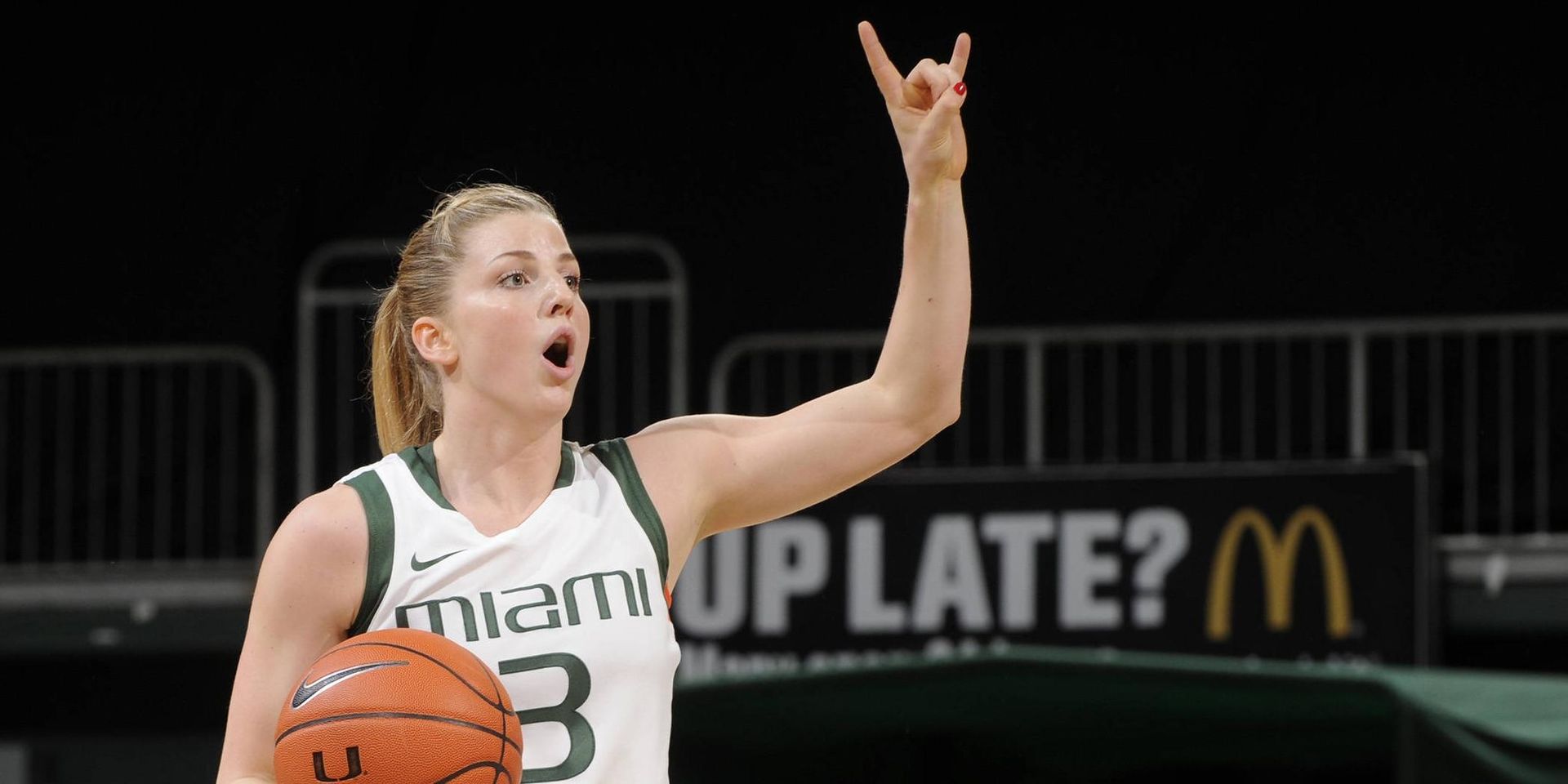 Basketball is not immensely popular in Yderstrom’s hometownof Östertälje, Sweden. In fact, she initially focused on equestrian, beforetransitioning to the basketball court.

“I was horseback riding, because we have a big farm and Istarted competing in that,” Yderstrom said. “I kind of miss it, but basketballis something that I really enjoy.”

The daughter of Swedish hockey legend Dick Yderstrom,athleticism is in Stefanie’s blood. When her mother Charlotta re-married, itwas to legendary Swedish basketball player and coach Jan Enjebo. Beingsurrounded by athletics from a very young age, Yderstrom feels like she wasdestined to shine in sports.

“I think it definitely pushed towards sports,” Yderstromsaid. “My stepdad was my basketball coach. We had a great relationship fromwhen my mom first met him. And then my dad was a great ice hockey player. Wecan talk more mental stuff. He doesn’t know a lot about basketball but he’sreally well educated about sports, in general, and with the mentality you needto succeed. I think growing up with that helped me a lot.”

A fierce competitor, Yderstrom played for Swedish nationalyouth teams since she was 15. She has competed in four youth EuropeanChampionships and led the U19 Swedish team to a silver medal at the 2007 WorldChampionships.

“I think that was one of the reasons why I was so fascinatedby college and wanting to come to the states and play,” Yderstrom said.

The 5-foot-8 guard knew she wanted to study and playbasketball in the United States, but she did not know where. Two friends fromher club team in Sweden played collegiately in America and their stories onlyfueled Yderstrom’s desire to play across the Atlantic Ocean. So she sent out emailsto schools and began to whittle down her list.

“The University of Miami was one of the schools that I wasreally, really interested in,” Yderstrom said. “I got a good connection withthe coaching staff and I really clicked with Coach Meier. I liked how shelooked at the game and how she was as a person.”

Yderstrom and Meier stayed in contact and the guard sentMiami’s staff some game tape for them to analyze. Meier loved what she saw onfilm and she knew she wanted Yderstrom to be a Cane.

But the talented guard was a hot commodity and fellow ACCrival Duke was very interested in Yderstrom, as well.  So Meier decided one day before the final day of recruitingcontact that she would fly to Sweden to meet with the prized recruit in person.The coach’s trip to Sweden made a huge impact on Yderstrom’s decision.

“She came over to watch me play in Sweden for a game andthen we met for a little bit after a game,” Yderstrom said. “I came for a visithere, but I pretty much already knew this was the school I wanted to go tobecause of how it went when Coach Meier came to visit me.”

Meier took a big risk in flying half way around the worldwith the hopes that she could secure Yderstrom’s commitment. Yderstrom took ahuge risk in leaving home for a foreign country with few acquaintances. Butboth are thrilled with the risks they took because they ultimately got theresults they desired.

“This whole experience here has been amazing,” Yderstromsaid. “When I graduate, I’ll probably look back and be like ‘I really just lefthome and went to a foreign country.’ Not a lot of people would do that and Ithink you have to be a little crazy to do that.”

Yderstrom, who turns 23 in April, admits that it was a majoradjustment when she first arrived in Miami. She knew a little English and onlyknew the basketball staff and her teammates, but she is proud of how shehandled herself over the past four years.

“It’s a big difference, culturally,” Yderstrom said. “Thepeople are very different here than in Sweden. Not having your family with youis hard, at first. I lived at home with my mom and my stepdad and I didn’t havethem around for the first time. I had to be on my own and find my way and be myown person.”

But Yderstrom’s adjustment was eased thanks to herrelationship with her coaches and teammates. They helped her feel welcome inher new surroundings and fall in love with the school and the city.

“That helps a lot,” Yderstrom said. “The coaching staff andthe team, really everyone around here, doing everything they can to help yousucceed and make it feel like home. Looking back, this is really the best placeI could have come to.”

Coming in, Yderstrom did not have many expectations. She didnot know what living in Miami and playing for the Hurricanes would be like, soshe decided to

“I actually didn’t have a lot of expectations,” Yderstromsaid. “I was going to take it one year at a time and see how it went. I alwayshad the option to come back home, but it worked out really, really well.”

Yderstrom joined Morgan Stroman as the headliners of the2009-10 freshmen class and the two have led the Hurricanes to 96 wins in theircareers. She has been a contributor at Miami from the start, ranking fifthamong ACC freshmen in scoring four years ago, finishing 10th in theconference in three-point field goals made as a sophomore, earning third-teamAll-ACC honors as a junior and first team All-ACC honors as a senior.

Yderstrom, Stroman and senior Pepper Wilson have workedtogether to help lead this year’s team to a 20-win season, the fourth inYderstrom’s four years at Miami. But her contributions to the Canes go beyondher abilities on the basketball court.

“We have had to come together and form a closer bond,” Yderstromsaid of the seniors. “We had to make decisions together and figure out what isgoing to work on the group, what is the best way to handle something and howare people going to react to certain things. We’ve worked really well together.I’m talking to one player that I can really get to on the team, while Stroconnects best with other players and maybe Pep can get to another player thatmay not respond as well to me or Stro. We’ve been delegating it like that andit’s been awesome.”

Embracing a leadership role was something new for Yderstrom.While she always tried to be a good example on and off the court, her firstseason as a captain brought upon new responsibilities.

“I knew I could always lead by example, but, especially thisyear, I had to step up and be a leader outside the court and bring the grouptogether. It was my job to make sure everybody was okay and that has been thechallenge for me. But it’s a challenge I embrace because it has helped medevelop and get better in every aspect as a basketball player and as a person. Ilearned a lot, especially from Coach Meier, about being a leader. She’s a greatleader and always sets a good example for us.”

Yderstrom feels her time playing for Meier has been aprivilege. The talented guard is confident that she is significantly betterafter playing for Miami’s head coach.

“I look up to her so much,” Yderstrom said. “I respect thatwoman. It’s hard for me to put it into words, but she is great. I never reallyhad a coach who showed that they cared about me so much outside the court, aswell as on the court. She just wants you to succeed. Coach Meier and her staffare willing to do everything they can for you to succeed. I’m really gratefulbecause I don’t think a lot of people get the opportunity to play for a coachingstaff like that.”

With Yderstrom’s career at Miami nearing its end, she istrying to finish strong and lead by example so the Canes can continue thestandard of excellence that she helped establish.

“I’m trying to set a good example for the players that wehave now,” Yderstrom said. “I hope that they continue to work hard to be greatand don’t take the opportunity for granted that they have here. I hope theyshow the people coming in what it means to be a Hurricane. If they do that, Ithink they can have many more successful years here. Coach Meier and the wholecoaching staff, I think they just bring out the best in people.”

Meier is incredibly proud of Yderstrom and her fellowseniors. Seeing the three seniors beat Duke for the first time in programhistory in their final home game ever is a memory that Miami’s head coach willcherish forever.

“It is a career-rewarding moment to have three of thefavorite kids you have ever coached be a part of this,” Meier said. “I’mtelling you, these are wonderful people. They have a depth of character.They’re bright. They represent the community well. They’re awesomestudent-athletes and you just pray for moments like this for kids who havegiven you so much.”

Meier feels Yderstrom, Stroman and Wilson had a huge impacton her program and she could not be happier for having the opportunity to coachthem.

“They have totally transformed this program,” Meier said. “Theyhave represented Miami in a way that I have only dreamt of, and all of themtook a risk in coming here. They took a program that didn’t have a lot to talkabout and all of us had not beaten Duke, this was the first time that we hadand it was a really great time to do it.”

Yderstrom and her teammates are focused on this weekend’sACC tournament and the upcoming postseason. But once her college career isover, Yderstrom plans to continue playing basketball.

“My mindset I’m going to try and play professional,”Yderstrom said before correcting herself. “I will play professionally. I’mgoing to see how that is and if it’s for me, then maybe I’ll do that for someyears.”

A veteran of the Swedish national basketball program,Yderstrom would be honored to represent her country in the next Olympics.

Beyond basketball, Yderstrom does not know where her lifewill take her. But she is confident that whatever happens, she will besuccessful. She is not afraid of the unknown and not afraid to take risks.After all, taking a risk and choosing to conquer the unknown is what broughther to Miami and gave her the opportunity to have four unforgettable,incredible years as a Hurricane.

“Opportunities come up and it leads to one thing and thenall of sudden you’re somewhere you never thought you would end up,” Yderstromsaid. “It obviously worked out for me in the past, so I am very open foropportunities in the future.”