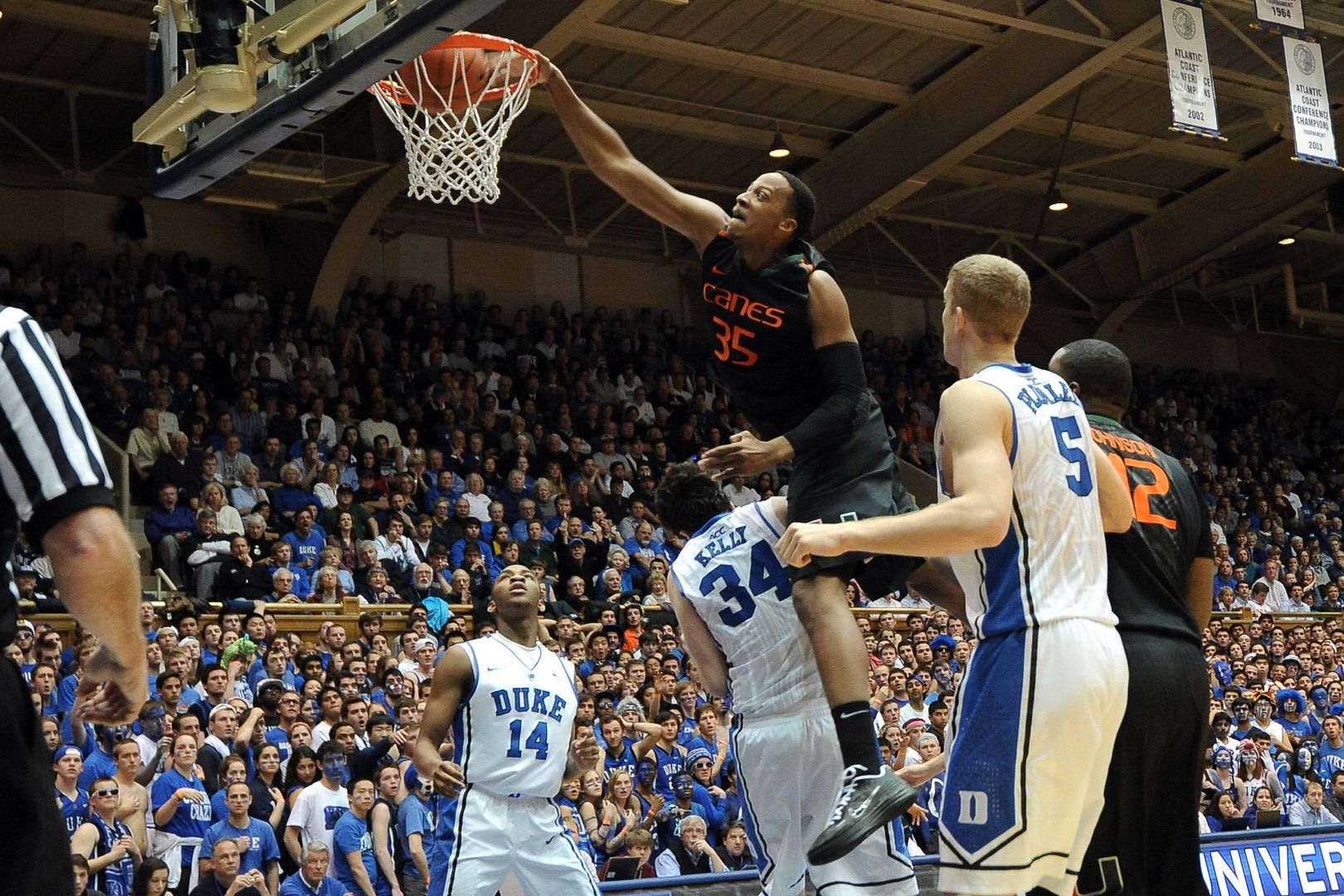 Heartbreaker: No. 5 MBB falls to No.3 Duke

The senior scored a career-high 36 points in his return from a foot injury that had sidelined him since January, helping third-ranked Duke beat fifth-ranked Miami 79-76 on Saturday night.

Kelly knocked down 10 of 14 shots – including 7 of 9 3-pointers- for the Blue Devils (25-4, 12-4 Atlantic Coast Conference), who avenged a blowout road loss in January by grinding out a tough win in Cameron Indoor Stadium. Quinn Cook added 15 points as Duke built a 10-point lead with about 2 minutes left then held off a frantic rally by Miami.

Shane Larkin scored 25 points to lead the Hurricanes (23-5, 14-2), who missed two 3s in the final seconds to tie it. Larkin came up short on the first over Kelly. Durand Scott ran down the rebound and fired a pass to the left corner to Rion Brown, whose final 3 clanged off the rim as the horn sounded.

Kelly immediately turned toward the Duke bench and extended both arms in the air, while Hall of Fame coach Mike Krzyzewski stopped on his way off the court to applaud and cheer toward the celebrating Cameron Crazies.

The game certainly lived up to the teams’ top-five rankings and their status as the ACC’s best. Miami led by seven in the first half and by two at the break, while Duke never led by more than five until finally building a cushion in the final 3 minutes.

Duke led 75-65 on Cook’s 3-pointer around the 2-minute mark, but the Hurricanes clawed their way back before getting those final two shots to tie. But Larkin also had a costly turnover when he threw away a sideline pass to Brown with Miami trailing by just two with about 30 seconds left.

Miami had beaten Duke 90-63 in January and had already clinched at least a share of the ACC regular-season title with the Blue Devils’ loss at Virginia on Thursday night.

But Saturday’s game was about more than just the league standings or the chance to avenge that blowout loss for the Blue Devils. Rather, this was the their chance to reclaim some swagger and momentum for March with the return of a player who had helped them to a No. 1 ranking before going out with an injury.

Duke was unbeaten with nonconference wins against Kentucky, Louisville and Ohio State when Kelly went down with the right foot injury against Clemson in January.

It was during Kelly’s absence that Duke suffered 27-point loss at Miami on Jan. 23, a game that saw the Hurricanes romping unchecked through Duke’s passive defense and even slapping the floor in an apparent jab at the Blue Devils’ tradition.

The 6-foot-11 forward was averaging 13 points and five rebounds, and could stretch defenses with his outside shot to open space for Mason Plumlee inside. He had missed 13 straight games, though he had been gradually increasing his work in practice in recent days before making his return and going right back in the starting lineup.

Miami led by three in a tight game before the Blue Devils finally put together a go-ahead flurry after a timeout, a spurt that started with – who else? – Kelly.

First he hit a pair of free throws, then knocked down a 3-pointer over Kenny Kadji with the shot clock winding down to push Duke to a 58-56 lead with 9:13 left. Plumlee followed with a short hook to cap the 7-0 run for a 60-56 edge.

Duke extended its lead with another 7-0 burst, with freshman Rasheed Sulaimon scoring a pair of driving baskets before Cook’s 3 that appeared to have Duke in control.

Duke shot 52 percent for the game, with Kelly’s big day offsetting Seth Curry’s struggles (seven points on 2-for-8 shooting). Kelly also helped the Blue Devils survive despite Miami’s domination on the boards that led to a 20-4 edge in second-chance points.

Kadji added 17 points and 10 rebounds for Miami, but big man Reggie Johnson had a miserable night by going scoreless on 0-for-5 shooting and picking up his fourth foul in the first minute after halftime.

Single-game tickets are on sale and can be purchase at CanesTix.com or by calling the BankUnited Center Ticket Office at 305.284.2263. The ticket office is open Monday-Friday from 8:30 a.m. – 5 p.m.

Head coach Jim Larrañaga is in his 29th season as a head coach and second at Miami. He has a 513-352 overall record and is 43-18 in his second season at Miami. With a 14-2 ACC record and just two games to play, Miami has earned the top seed in the ACC tournament and at least a share of the ACC regular season conference championship.

Miami is now 10-3 overall and 7-2 in conference play away from the Bank United Center this season.

The Hurricanes, who led at the half 36-34, are now 16-2 this season when leading at the half.Miami is one win short of tying the school record for most wins in a season, which was 24 in 2001-02 under Perry Clark.

Kenny Kadji, who finished tonight’s game with 17 points and 10 rebounds, recorded his fifth double-double of the year and ninth of his UM career.

Shane Larkin has had back-to-back 20-point games with 25 points at Duke and 22 against Virginia Tech. He has scored 20+ points four times in his last 10 games.

Shane Larkin (25), Kenny Kadji (17), Durand Scott (12) and Trey McKinney Jones (12) all recorded double figures in scoring.The Hurricanes are now 13-2 this season when four or more Canes are in double figures.