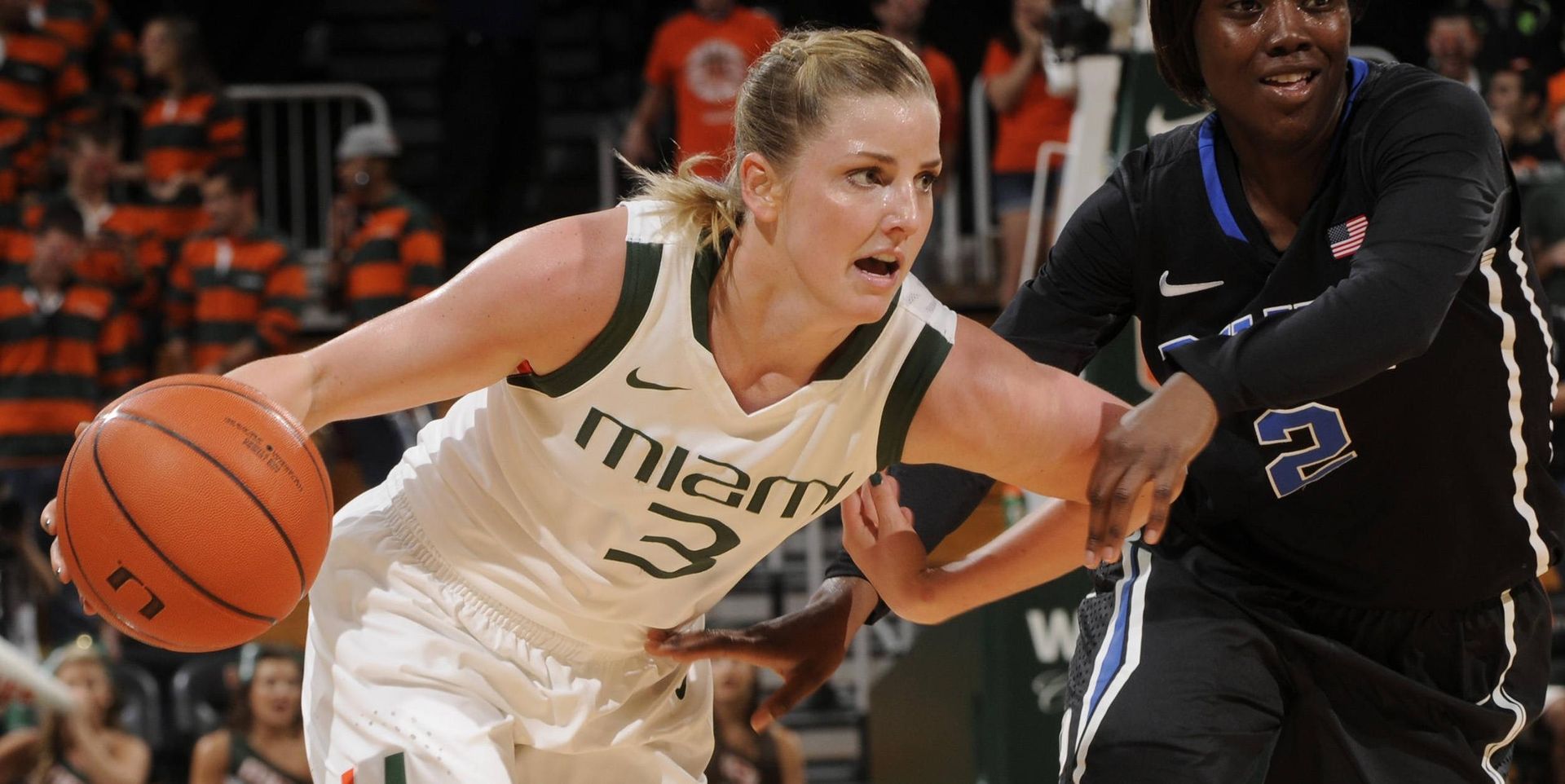 CORAL GABLES, Fla. (AP) – For Stefanie Yderstrom and Pepper Wilson, it was a grand finale.

For Katie Meier, it was an unforgettable first.

Yderstrom and Wilson each scored 16 points in their final homeregular-season games, Krystal Saunders added 15 and Miami gave its NCAAtournament resume a serious boost by upsetting No. 5 Duke 69-65 on Thursdaynight, the first time in 11 meetings between the programs where the Hurricanesemerged victorious.

“You just pray for moments like this,” said Meier, theMiami coach who had never beaten Duke _ where she once was a standout player.”You pray for rewards like this for kids who have given you so much. Theyhave totally transformed this program. They’ve represented Miami in a way thatI’ve dreamt of. All of them took a risk coming here. All of us had not beatenDuke. That’s the first time we had. And now’s a really good time to doit.”

Morgan Stroman added 11 for the Hurricanes (19-9, 10-7 AtlanticCoast Conference), who beat then-No. 6 Penn State by the same 69-65 score athome in November and knew they needed another big win to enhance their NCAAhopes.

They got it, thanks largely to a pair of seniors who came up bigin the season’s biggest game to date. Wilson and Yderstrom combined to score 22of their 32 points in the second half, and teamed up for the basket that sealedthe win with 20 seconds left. Yderstrom found Wilson with a perfect bounce passoff a pick-and-roll, and an easy layup had the Hurricanes poised forcelebration.

Moments later, it was over. Meier thrust her arms in the air, andher team gathered at center court for postgame hugs.

“Miami played a great game,” Duke coach Joanne P.McCallie said. “They played physical. They outplayed us. Theyoutphysicaled us. They outhustled us. They probably played their best game ofthe season, I would suspect.”

Elizabeth Williams and Haley Peters each scored 17 for the BlueDevils (26-2, 16-1), who already have locked up the No. 1 seed in the ACCtournament. Alexis Jones added 13 for Duke, including a 3-pointer with 49seconds left to get her team within 67-65.

“Right now, I’m just in awe,” Wilson said. “It’slike one of the greatest feelings I’ve ever had.”

Which could not be more of a contrast from what happened the lasttime Miami and Duke got together.

Miami was tied with Duke 29-all at halftime of the teams’ firstmeeting this season back on Jan. 31 _ a game that turned into an 82-43 romp forthe Blue Devils.

No collapse this time, though. Not even close, despite shootingjust 33 percent in the second half and 34 percent for the game, compared to 47percent by Duke. The difference was points off turnovers and second-chanceopportunities, two areas where Miami combined to outscore Duke 31-18.

It was the third game for Duke since the Blue Devils lost startingpoint guard Chelsea Gray to a season-ending knee injury.

“We’ve been in a new season since Chelsea’s injury and tryingto grow and learn how we’re playing together, especially on the defensive sideof the ball,” Peters said. “Our focus was not where it needed to be.I thought we played very young. We weren’t where we should have been.”

Yderstrom and Wilson, however, were everywhere, especially in thefinal minutes.

The second half was theirs.

Yderstrom set up Saunders for a 3-pointer with 13:18 left to putMiami up 49-43. And after Duke got within four later in the half, Yderstromstarted calling her own number. A pair of free throws and a quick 3-pointergave Yderstrom _ whose mother traveled from their native Sweden for seniornight _ five points in 25 seconds, pushing Miami’s edge to 58-49 and sendingmany of those on the Hurricanes’ bench leaping for joy.

Barely three minutes later, the momentum was all Duke’s.

Tricia Liston, who didn’t score in the first half, had four quickpoints and Jones followed with three more, getting the Blue Devils within 58-56with 6:01 left. But after Saunders blocked Peters’ shot in the lane _ despite a7-inch height differential _ Yderstrom scored from close range, snapping aMiami drought that lasted more than four minutes and making it a two-possessiongame once again.

And the lead stuck the rest of the way.

Wilson scored Miami’s next six points to extend the lead to 66-60,and the Hurricanes got some help on the last of those buckets. Jones dribbledthe ball off McGuire’s foot for a turnover, and Wilson made the Blue Devils payby banking one in with 1:51 remaining.

“We knew we had nothing to lose,” Stroman said.”Might as well go out with a bang.”