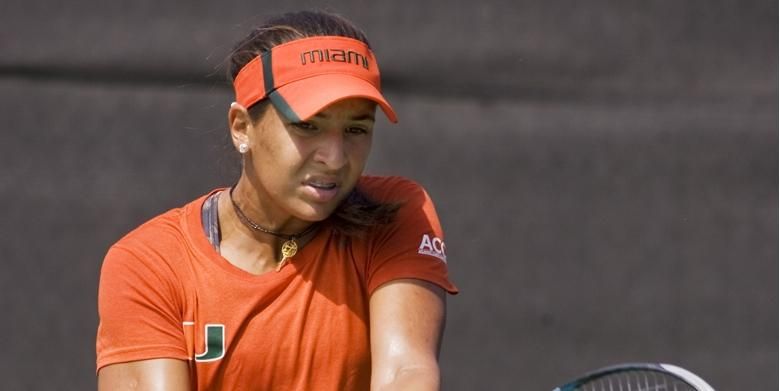 The 42nd-ranked doubles team in the nation, Miami’s Stefanie Wagner and Line Lilekite, beat Florida State’s duo of Daneika Borthwick and Kerrie Cartwright, 8-4, to secure the doubles point for the Canes. The most decisive doubles match, however, was on Court 2 where Miami’s Monique Albuquerque and Clementina Riobueno dominated the Seminoles’ Kristina Schleich and Francesca Segarelli, 8-2.

The Canes’ good fortune seemed to continue as Wagner dominated her singles match against Florida State’s Mia Vriens to turn in the first final score of singles competition with a quick, 6-3, 6-2, win. However, things got harder from that point as the Canes were only able to secure one other singles victory with Deborah Suarez outpacing Florida State’s Schleich with a 6-4, 6-3 victory.

Albuquerque and Melissa Bolivar each lost heartbreaking three set battles in which they came back to win the second set but ultimately came up short.

Freshman Kelsey Laurente was locked in a tight battle of her own at the number one singles spot, with the score tied at 3. Although Laurente was up 5-2 in the third set, Florida State’s Borthwick battled back to claim a 7-5, 4-6, 7-6 victory.

Miami head coach Paige Yaroshuk-Tews is confident Laurente will bounce back from this tough loss.

“Kelsey is an incredible competitor and tennis player. Today she struggled with nerves,” Yaroshuk-Tews said. “A big part of sports is addressing problems and I have every confidence that Kelsey will move past the nerve issues and improve everyday like she has shown the ability to do.”

“We can either focus on being young or focus on getting better,” Yaroshuk-Tews says. “I know the girls on this team are poised enough to know what they need to do to get better, and they also know that you need to work hard to get victories, especially when you play teams as good as Florida State.”

Miami’s next matchup will be at home, on March 3, against the No. 18 Clemson Tigers. The match will be at noon and will mark the fifth time this season that Miami will take on a tennis program ranked in the Top 25 nationally.