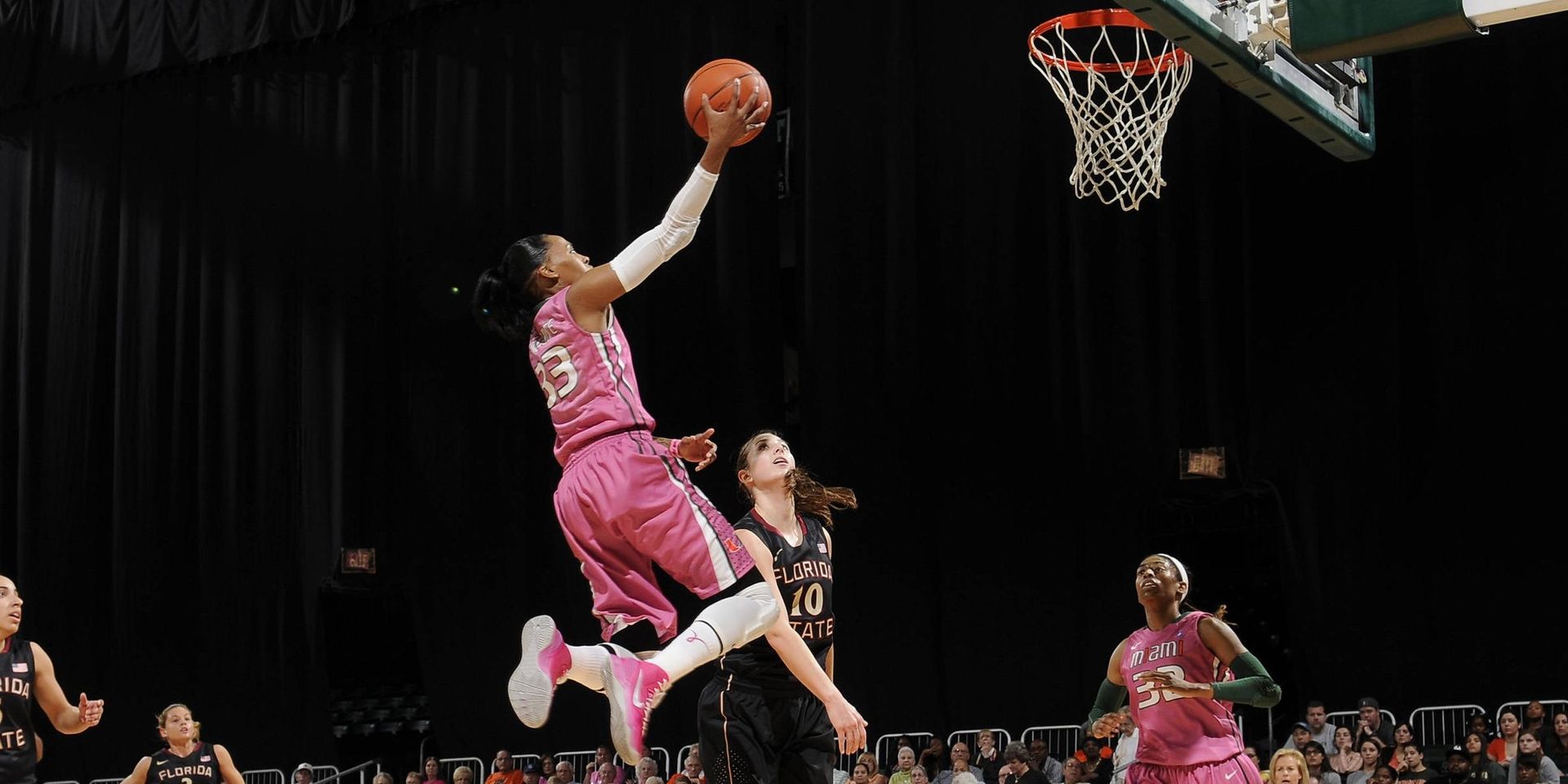 CORAL GABLES, Fla. — After a resounding victory against Clemson, the Universityof Miami women’s basketball team looked to continue its momentum against rival FloridaState on Sunday. However, Seminoles were able to keep the Canes at arm’s lengthand the visitors came out on top 93-78 Sunday at the BankUnited Center.

“As frustratedas we are, FSU did a great job in making timely shots,” said Miami head coachKatie Meier. “They were hot in the first, and second half.”

Shawnice “Pepper” Wilson (12 points, five rebounds) startedeach period well for Miami, scoring nine of her 11 points in the first twopossessions of each half.

Suriya McGuire used her elusiveness in the lane and aroundthe rim on her way to her sixth double-figure scoring performance (10 points,five rebounds).

Unfortunately for Miami, their early 7-4 lead wouldn’t holdas the Noles would reel off a 10-0 run, before sophomore guard Michelle Woods (ninepoints, two rebounds, two assists) hit a layup with 13:31 remaining in the half.

“It’sfrustrating, but we just have to finish,” said Stroman.

However, the Canes hit their stride towards the end of the half.McGuire scored six consecutive points for the Canes, followed by a jumper byfreshman guard Caprice Dennis to pull the Canes to within 11. Dennis finishedoff the first half on a high note for the Canes, hitting Miami’s first three-pointerof the game in the final moments closing the FSU lead to just 39-31 at thebreak.

After Wilson’s strong start to the second half pulled theCanes to within four, the 19th-ranked Noles saw some timely shootingfrom long range. Alexa Duluzio and Lauren Coleman accounted for foursecond-half three-pointers.

Stefanie Yderstrom hit a late three-pointer of her own thatcut the Seminole lead to 10, but Florida State was able to connect on theirfree throws late to seal the game.

“There isn’tanyone that has held FSU under 60 pts. If you go five or six empty possessionswithout scoring, you can’t win that way,” said Meier. “These next five gamesare going to be awesome and so important to close out the season.”

Miamihas an unofficial bye week, as they don’t hit the hardwood again until Feb. 17when they welcome Boston College to the BankUnited Center.