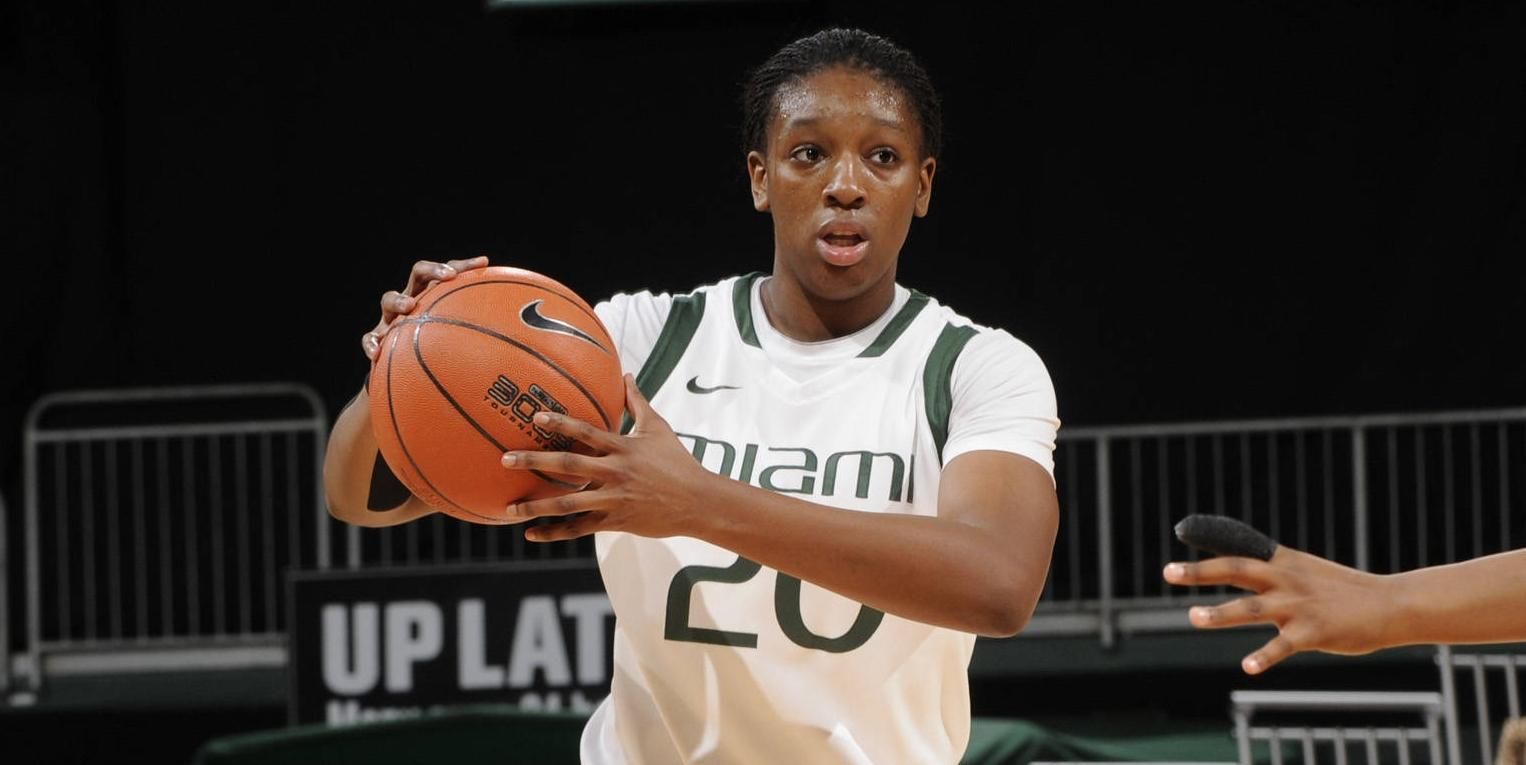 WBB Looks Even Season Series vs. No. 19 FSU

MEIER TO LEAD TEAM USA U19 SQUAD
• The Canes’ annual Play 4Kay game is this Sunday against FSU.
• For the first time, UM will wear pink uniforms in the annual contest in an effort to raise breast cancer awareness.
• The game will be televised on CSS.
• Fans are encoured to wear pink to the games as well.
• T-shirts will be on sale for $10. All proceeds will go to the Sylvester Comprehensive Cancer Center.

BIG-TIME TEAM ON THE SMALL SCREEN
• 9 regular season games to be televised this season.
• Miami at Clemson on Feb. 7 will be the 7th TV game of the season.

PEPPER TOO HOT FOR NC STATE TO HANDLE
• Shawnice “Pepper” Wilson has faced NC State 3 times since transferring to UM after her sophomore season.
• Averaged 11.3 points and 14 rebounds in those games.
•Then career-best 17 points and 17 rebounds at NC State as a junior.

MEIER ENTERS EIGHTH SEASON AT MIAMI
• Katie Meier and her staff will begin their 8th year at the helm in Coral Gables.
• UM advanced to the NCAA tournament 2nd round for the 2nd consecutive season in 2012
• Canes finished 2nd in ACC with a 14-2 record in 2011-12
• Miami finished with a 26-6 record.
• 3rd straight 20-win season for Meier.

RETURNING ALL-ACC PERFORMERS
• Morgan Stroman and Stefanie Yderstrom have each been named 3rd Team All-ACC.
• Yderstrom earned it last season, leading the ACC with 68 3-pointers.
• Stroman was well on her way to earning ACC honors for the 2nd consecutive season before her Achilles’ injury.
• She earned All-ACC honors as a sophomore.

UM CLASS RANKED 11TH
• 3 high school standouts, Adrienne Motley (Newport News, Va.), Nigia Greene (Atlanta, Ga.) and Jessica Thomas (Gainesville, Fla.), each signed with the Canes.
• The trio will join the Hurricanes for the 2013-14 academic year.
• Motley, a 5-9 guard from Woodside High, ranked No. 27 overall prospect and 7th best PG in the nation by ESPN HoopGurlz.
• Greene is a 4-star prospect according to ESPN HoopGurlz. Ranked No. 41 overall, and the 9th-best guard in the nation.
• Thomas ranked 48th best PG in nation by ESPN HoopGurlz. In 2011, the 5-6 guard led the Buchholz High to semifinals of the Florida Girls State Basketball Playoffs.
• Younger sister of Hurricane legend Lamar Thomas.
• All three members incoming class have been nominated to play in the 2013 McDonald’s All-American Game.
• Motley was one of 20 players named a 2013 WBCA High School All-America honorable mention.