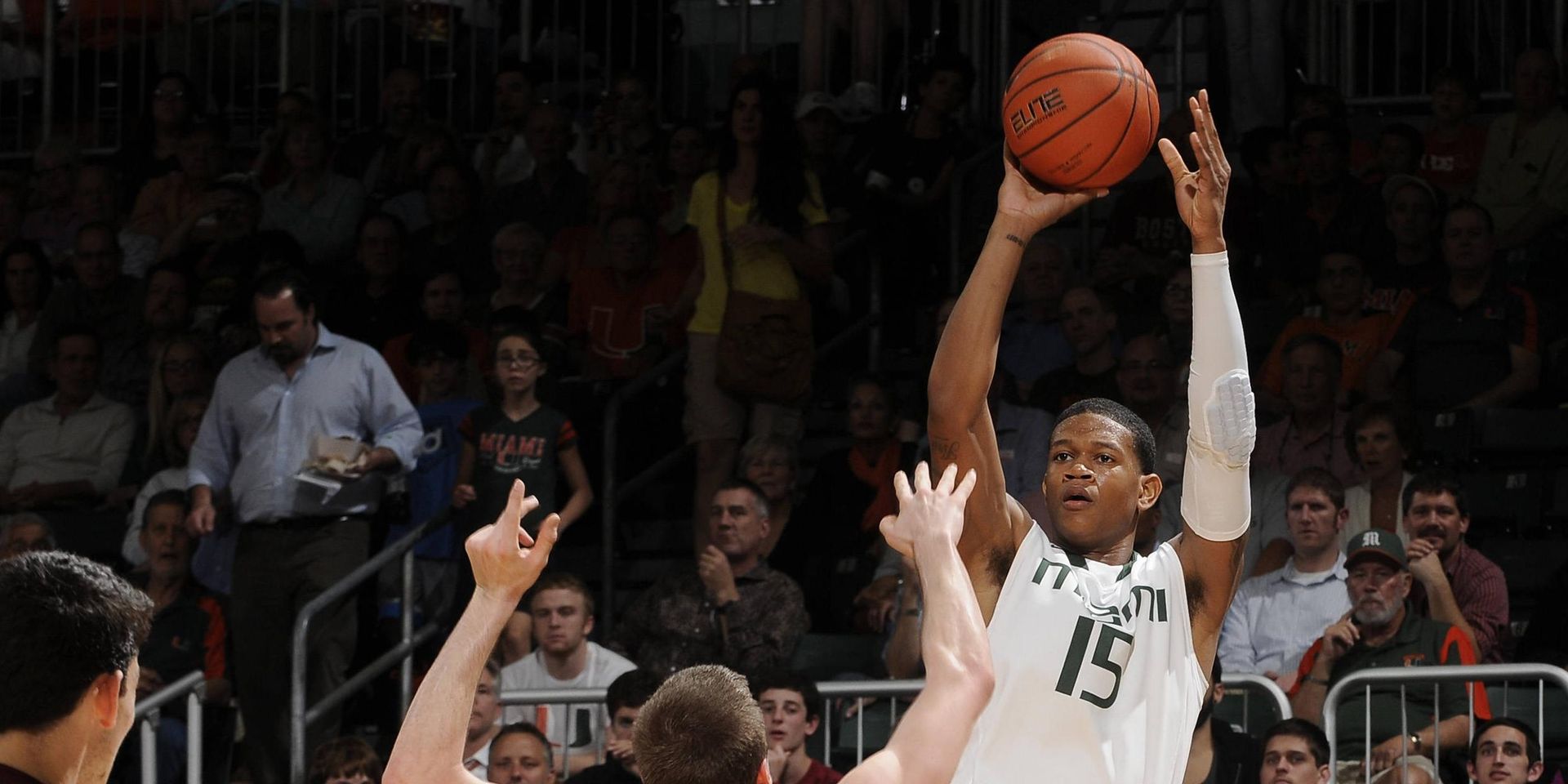 CORAL GABLES, Fla. (AP) – Kenny Kadji scored 10 points during a span of four possessions to start a second-half surge Tuesday night, and No. 8 Miami remained unbeaten in the Atlantic Coast Conference with a 72-50 victory over Boston College.

Reserve junior Rion Brown tied a career high with 22 points, and Kadji had 16 points and eight rebounds in 21 minutes for the Hurricanes, who went 11 for 22 from 3-point range. They held an ACC opponent to 50 points or less for the fourth time.

The Hurricanes (18-3, 9-0 Atlantic Coast Conference) have won 10 consecutive games and are 10-0 in their on-campus arena, winning each of the past three home games by at least 22 points. Nine victories in the ACC matches their highest total ever and they are the last unbeaten team in league play among the major conferences.

Boston College (10-12, 2-7) lost to Miami for the second time in three weeks, and for the sixth straight time.

The Hurricanes’ ranking this week is their highest since 1960. But their streak of sellouts – a rarity for the perennially overlooked program – ended at two games. Attendance was 5,149.

Olivier Hanlan scored 16 points for the Eagles and Ryan Anderson had 14 points and 11 rebounds, but Miami outrebounded Boston College 42-30.

The Eagles shot only 37 percent, including 5 for 23 from 3-point range. Joe Rahon, averaging 10.8 points per game, did not score.

When Boston College reduced its deficit to six points early in the second half, Miami responded with a 17-4 run to put the game away. The spurt started with the 6-foot-11 Kadji.

Brown scored 15 points in the second half and finished 5 for 7 from 3-point range. Miami’s bench outscored the Eagles’ 28-6.

Game Notes
-Tonight’s starters for Miami: Shane Larkin, Durand Scott, Trey McKinney Jones, Kenny Kadji and Julian Gamble.
– 5,149 fans were in attendance for the game.  It is the fourth-most fans in the BankUnited Center for a game against Boston College and the most since 2011.
-Miami hit a season high 11 3-pointers against Boston College. The previous high was nine, which the team has accomplished four times.
-Kenny Kadji scored 16 points and grabbed eight rebounds. Kadji has now scored in double digits in 12 straight games (18 total, this season). Kadji has scored 15 or more points in seven games this season. Kadji had six points and five rebounds in the first half.
-Julian Gamble finished the night with two blocks. Gamble has now blocked a shot in 11 straight games and had multiple blocks in 12 outings.
-UM held BC to 50 points.  It is the sixth time this season that the Hurricanes have held a team to 50 or fewer points.
-Rion Brown (22 points) tied his career-high and set his BankUnited Center all-time high. Brown scored a season-high five three-pointers and had multiple threes for the fifth time in the 2012-13 season.  Brown also scored in double digits for the third time this season.  He had also had two steals for the third time this season (last at Hawaii, Feb. 22, 2012). Brown tied his season-high with two steals.
-Reggie Johnson tied his season-high with two assists.
-The Canes are 11-0 when four players score in double digits this season.  Tonight, Larkin (10), Scott (11), Kadji (16), and Brown (22) all did so.
-The Hurricanes are 10-0 at the BankUnited Center in 2012-13 and are 117-47 overall in the BUC.
-Miami has shot better than 42 percent from the field in nine of its 10 home games, shooting a season-high 59.0 percent vs. Jacksonville.
-Miami is on a seven-game home ACC winning streak, dating back to last season. The Canes have defeated Wake Forest, Florida State, Boston College (2x), Maryland, Duke and Florida State at the BankUnited Center in that span. Miami’s last home ACC loss was Feb. 15, 2012, when North Carolina defeated the Canes 73-64. Coach L is 18-7 overall in ACC play at Miami, including 10-2 at home and 8-5 on the road.
-Miami leads the ACC with a 9-0 mark in the league, the best start for an ACC team in conference play since Duke was 10-0 to begin the 2007-08 campaign.
-This is the first time the Canes have started conference play 9-0 since joining a league in 1991.
-Miami has outscored its opponents 640-522 in the paint, topping out at 50 at NC State.
-Miami has made more 3-pointers than its opponent in 12 of 21 games this season.
-Miami has shot better than 45 percent from the floor in 23 halves this season and overall in 14 games.
-Miami has held 25 opponents (9 ACC) to less than 60 points since Larrañaga arrived.
-The Canes have held 33 opponents to less than 41 percent from the field under Coach L, including 15 of 21 this season.
-Miami is 5-0 when Durand Scott scores Miami’s first points in the game
-Reggie Johnson has totaled 983 career points in four seasons for the Canes. With 17 more points, he will be the 34th Cane to top the 1,000 point plateau, joining teammate Durand Scott on the list.

Miami During the Current 10-Game Winning Streak_
– UM is currently riding a 10-game winning streak.
– Miami’s last 10-game winning streak was in 2007-08, when the Canes started the season 12-0. UM went on to a 23-11 record and an appearance in the NCAA tournament.
– Miami has outrebounded seven of 10 opponents. UM posted +12 against FSU and Boston College, and + 8 against Duke.
– Miami has outscored its opponents 392-300 in the second half.

Tickets to Miami basketball games can be purchase at CanesTix.com or by calling the BankUnited Center Ticket Office at 305.284.2263. The ticket office is open Monday-Friday from 8:30 a.m. – 5 p.m.