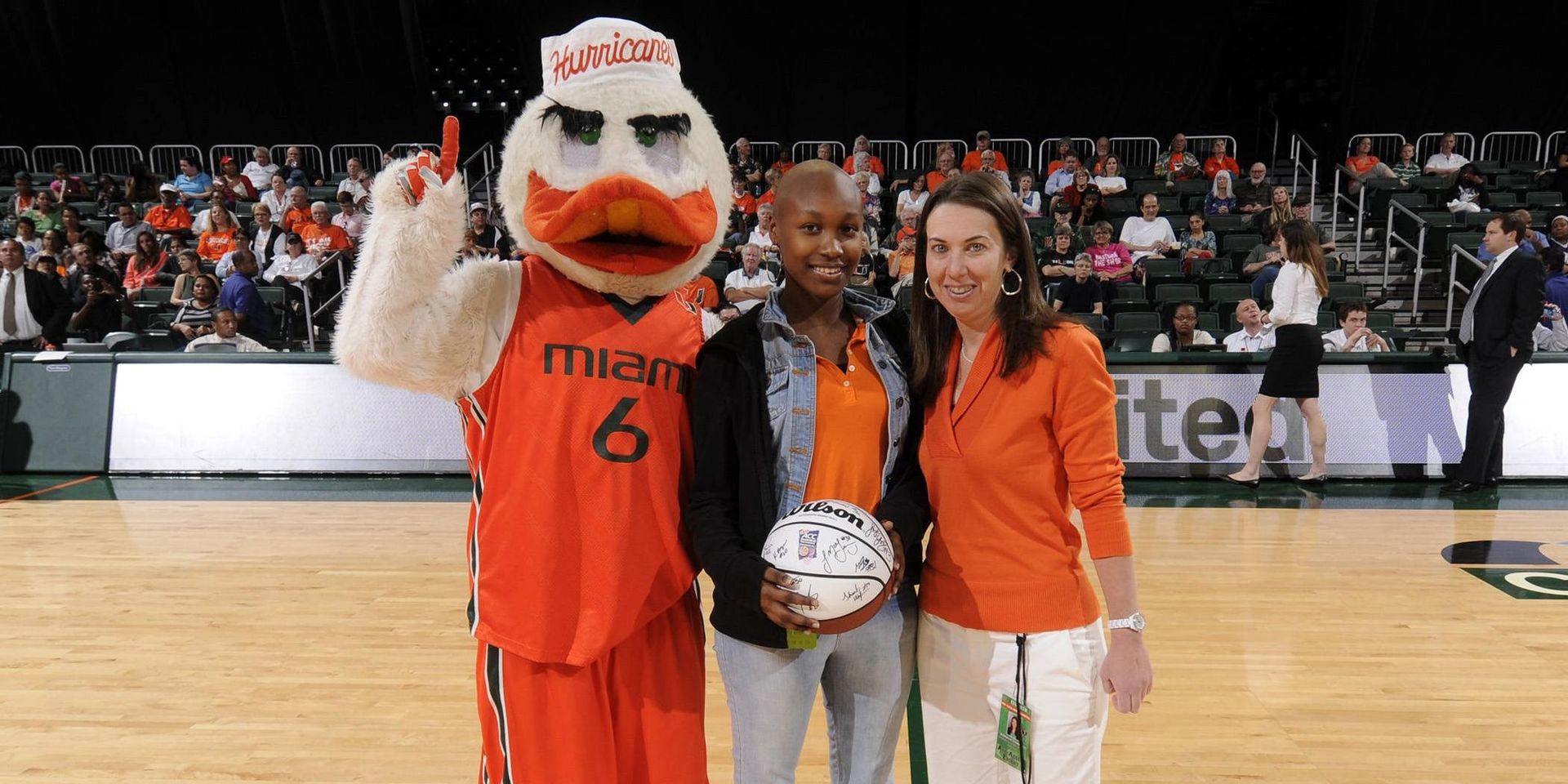 CORAL GABLES, Fla. — Natalia Brooks had never heardher daughter talk about sports. But right before falling asleep on Saturdaynight, Deja Webster told her mother that when she grows up, she wants to be a basketballplayer.

“She was never interested in basketball before all of this,”Natalia said. “Yesterday she was exhausted when she got home, and she usuallydoesn’t go to bed until late.”

Deja had reason to be tired. As the first local youth to be recognizedby the University of Miami in conjunction with the Austen Everett Foundation,Deja spent the past two days as an honorary member of the Miami Hurricaneswomen’s basketball team. And while she is battling Stage III Hodgkin’slymphoma, her impending radiation treatment was the last thing on her mindafter the Hurricanes’ 68-42 win over Virginia Tech Sunday afternoon.

“I had never been to a real court before,” Deja said. “WhenI got here, everyone was so friendly, so nice, so full of spirit. It felt likeI was right at home.”

After meeting the team during their practice on Saturdayafternoon, Deja sat on the bench for Sunday’s game while her mother Natalia andcousin Kent sat in the first row. She spent halftime in the locker roomlistening to head coach Katie Meier’s speech, and led the team in prayer atcenter court after the victory.

“I felt like one of the players out there, our interactionswere so much fun,” she said. “The girls had me laughing the whole time. I justfelt like I had known them forever.”

Deja was recognized with a team-autographed ball during apresentation at a first-half timeout. Deservedly, the Miami, Fla., nativereceived a standing ovation from the crowd.

“She really enjoyed the experience,” Natalia said. “It’sgreat for the team and the girls to lend themselves to something like that. Itreally can make a difference in someone’s life – it has already made adifference in hers.”

Deja wasn’t the only one who enjoyed the experience.

“It’s inspirational for me,” sophomore Suriya McGuire said.”Life can be so much worse for us. For us to have an impact on her, for her towant to spend time with us, it means a lot to me.”

While Deja is already looking forward to returning to theBankUnited Center for her next Hurricanes game, the courage displayed by theyoungster helped remind the team about the importance of enjoying each andevery moment.

“Itopens my eyes to other things,” McGuire said. “We all need to stick together asa team and be happy in the moment. You can’t predict your future. It wasinspirational.”