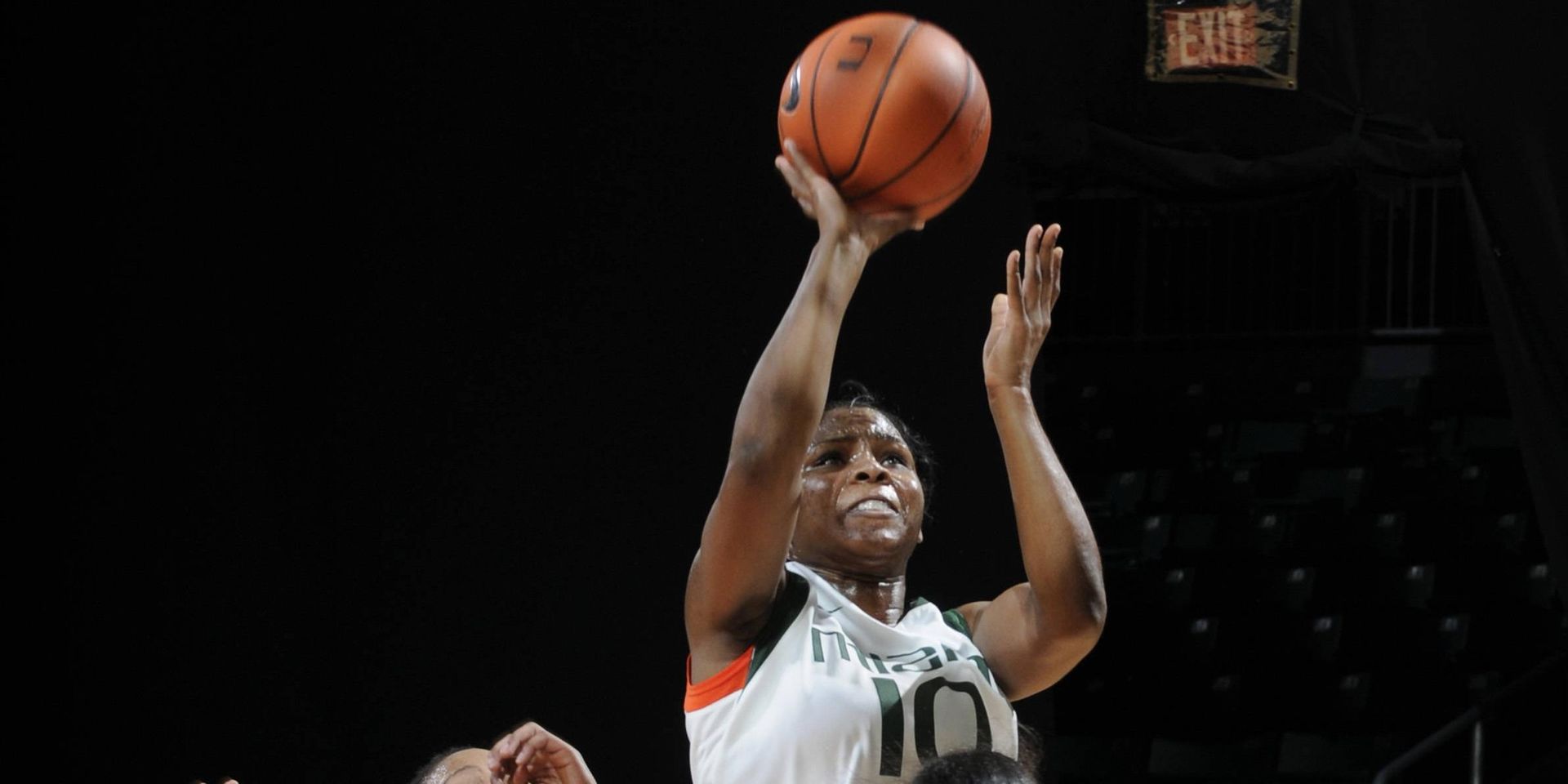 CORAL GABLES, Fla.  – The University of Miami women’s basketball team was lookingto regain some momentum against Virginia Tech on Sunday. Coming off of twoconsecutive losses to ACC opponents UNC and Duke, the Hurricanes came out strongagainst the Hokies for a 68-42 win at the BankUnited Center.

“It’s a greatfeeling,” said UM head coach Katie Meier. “How we responded to adversity thistime was better. We just focus on the positive and ignore the negative.”

Leading the charge for the Canes was sophomore guard MichelleWoods, finishing with 15 points and five rebounds. Senior guard StefanieYderstrom added 11 points and three steals after being held scoreless in theprevious game against Duke.

Kick-started by a layup by senior center Shawnice “Pepper”Wilson at 15:25 in the first, the Canes went on a 14-4 run in five minutes andstretched the lead to eight. Michelle Woods took the Canes’ first lead of thegame, 9-8, with a jumper at 14:14. Capping off the run was a three-pointer byfreshman guard Caprice Dennis, her first field goal in nine games.

“We had twogreat runs,” said Meier. “Our tempo and guard play was huge. McGuire and Woodshad great control. Virginia Tech tried to shut out Pepper and Stefanie, so ourguards had to step up.”

Yderstrom scored her first points since Jan. 24, hitting twofree throws with 2:41 remaining in the first to give the Canes an 11-pointlead. Junior forward Maria Brown (six points, five rebounds) extended the leadto 16 on a jumper with just seconds remaining, giving the Canes a 39-23 lead athalftime.

Miami pulled further away in the second half, with Yderstromscoring nine of her 11 points. The Canes led by as many as 28 several times,first hit with 13:03 remaining when freshman forward Keyona Hayes (eightpoints, 11 rebounds) sank a jump shot.

The Hokies, led by Evans’ 12 points and Uju Ugoka’s 12points and 13 rebounds, were held to 20 percent shooting and scored only 19points in the second half. They were also outrebounded by the Canes, 47-39.

“Every game wewant to crash the boards and we were able to execute that today,” said Hayes.

Sophomore guard Suriya McGuire had 10 points and fourassists for the Canes, and Wilson was close to a double-double with nine pointsand nine rebounds.

The game was played as the Austen Everett Foundation honoredits first recipient. Founded by former UM soccer goalie Austen Everett, whodied of non-Hodgkins lymphoma in 2012, the foundation aims to connect cancerpatients with professional and collegiate teams. On the team bench to watch thewin was Deja Webster, the first person to realize Everett’s dream. Webster hasStage Three Hodgkins lymphoma and just finished her final round of chemotherapy.

“It’sinspirational,” said McGuire. “Life could be so much worse. We use it as amotivation.”

The Hurricanes hit the road to face Clemson on Thursday inSouth Carolina. Tip-off is at 7 p.m.