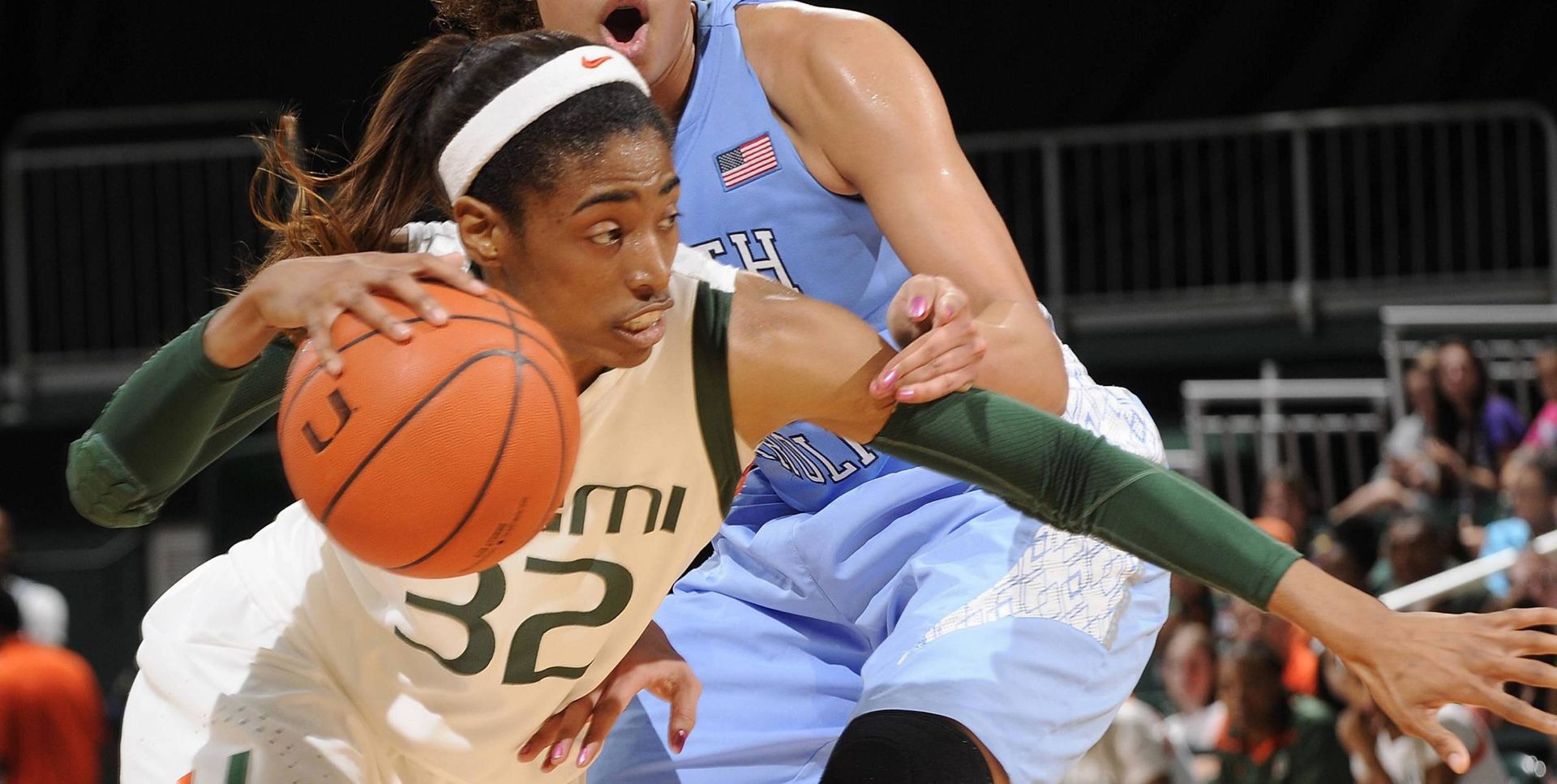 WBB Falls on Buzzer-Beater to No. 11 UNC

CORAL GABLES, Fla.  – Fresh off a last second win at Wake Forest, the Universityof Miami women’s basketball team was looking for similar last-second heroicsagainst North Carolina on Sunday at the Bank United Center. But it was the TarHeels who hit their final basket, edging out the Hurricanes 64-62 at thebuzzer.

“It was a horrible,disappointing way to lose,” said Miami head coach Katie Meier. “We hadtoughness, energy and effort. The whole game we didn’t cut and meet the ball. Thewhole game, there were so many live ball turnovers. It’s one of the worst lossesI’ve ever experienced.”

Senior Morgan Stroman had a career day for the Canes,finishing the game with 28 points, besting her previous high of 23 points, andfour steals. She also grabbed 13 rebounds, tying her season best, for her sixthdouble-double of the season.

“I just wantedto go out and play a good game,” said Stroman.

North Carolina struck first in the opening seconds of thegame with a layup by Xylina McDaniel. Krystal Saunders (seven points, tworebounds) answered for Miami with a three-pointer with 45 seconds elapsed inthe first half.

The UNC defense was able to stifle the Canes in the firsthalf, holding Miami without a basket for nearly four minutes.

Yderstrom went 0-of-11 from the field in the first half, andfinished the game with six points and three rebounds.

“We need abetter game from Stef and she knows that,” said Meier. “It was a decisionmaking factor that attributed to her poor shooting tonight.”

Two points was as close as the Canes would come in the firsthalf, shooting only 21 percent from the field and falling behind by as many as11 points. But Miami fought back to within six. The Tar Heels led 33-27 goinginto the half. Tierra Ruffin-Pratt led UNC with nine points in the first, andfinished with 19 on the night.

Stroman scored Miami’s final nine points of the first half,and led off the second with the first four points for the Canes.

The Canes started the second half with a 10-3 run, pullingto within one with 16:09 remaining. Stroman tied the score at 36 with 15:20remaining and took the lead for the Canes on a free throw. From there, itbecame a battle for the lead, with Stroman and Yderstrom each taking turns totie the score for the Canes in the final five minutes.

Suriya McGuire (eight points, three rebounds, two assists),the source of the last-second game-winning shot against Wake Forest, took thelead for the Hurricanes on a three-pointer with 1:13 remaining in the game.

Yderstrom sank a free throw with 00:39 left to play, andMcGuire hit two as well with 00:32 remaining. This gave the Canes a five-pointlead, their largest of the night.

But it wasn’t meant to be. North Carolina battled back, withDanielle Butts winning it on a buzzer-beating jumper.

“I feel likethe last minute we had it. I guess we weren’t as composed as we should havebeen,” said Meier. “We’ve got to learn from it. The back court has to step up,and ball security and free throws are going to be key. We want to respond in avery tough way.”

Miaminext hits the road to take on No. 4 Duke at Cameron Indoor Stadium on Thursday,with tip-off at 7 p.m.