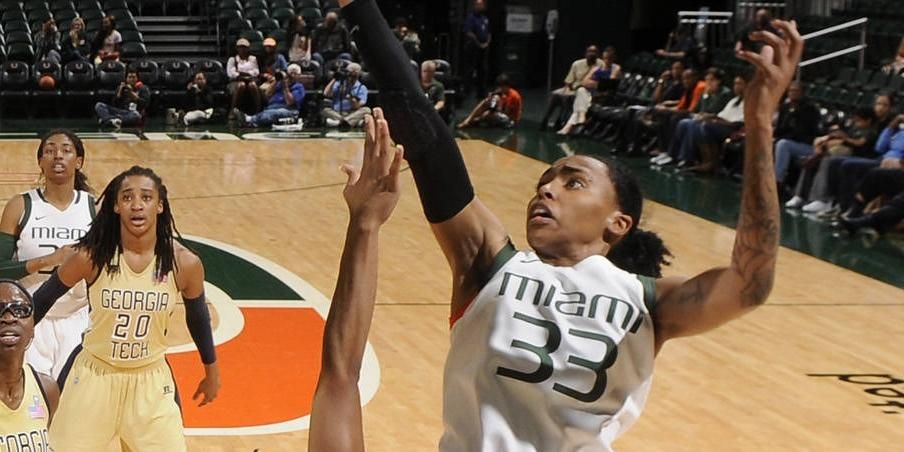 WINSTON-SALEM, N.C.  – SuriyaMcGuire hit a game-winning layup after a magnificent spin move in the lane withjust 5.3 seconds remaining, giving the Hurricanes a 79-78 win over Wake ForestThursday night at the Joel Coliseum.

McGuiretwice gave the Canes (14-5, 5-3 ACC) a lead in the game’s final 32 seconds, butnone more clutch than her game-winner, her second of the season. The first cameagainst then No. 6 Penn in the ACC/Big Ten Challenge. In the end, theMinneapolis native had a career-best 17 points on 7-of-12 shooting. Thirteen ofher points came in the second half.

TheCanes led by as much as 13 points with less than nine minute to play, but a17-4 Wake Forest run over the next 4:23 tied the game at 69. For the remainderof the contest, the teams traded baskets, with McGuire hitting Miami’s finaltwo shots.

SeniorsShawnice Wilson and Stefanie Yderstrom had big first halves for Miami, on theirway to 14 and 12 points respectively. Fellow senior Morgan Stroman had 10points and a team best six rebounds.

TheHurricanes shot a season-best 55 percent from the floor, but was out-rebounded35-23 on the night, giving up 24 second chance points.

Thefirst half saw Miami shoot 63 percent from the field, its best first-halfoutput of the season. UM previously shot 52 percent in the opening half againstFAU on Nov. 23. Yderstrom led all Hurricane players with 10 points at thebreak, while Wilson and Stroman added eight each.

Foulsbecame an issue for both teams in the opening stanza as Miami and Wake Forest committeda combined 22 fouls. Five players for the Canes and four for the Demon Deaconseach were riddled with two fouls by the break.

Despitethe fouls, the Hurricanes held a 42-37 halftime lead, thanks to five pointsfrom Shanel Williams including her first three-pointer of the season and thefinal bucket of the half.

TheCanes return to the court on Sunday in a Miami basketball double-header at theBankUnited Center. The women will face No. 11 North Carolina at 2 p.m. on ESPN2while the 25th-ranked men’s team will play host to rival FloridaState on ESPNU at 6 p.m.