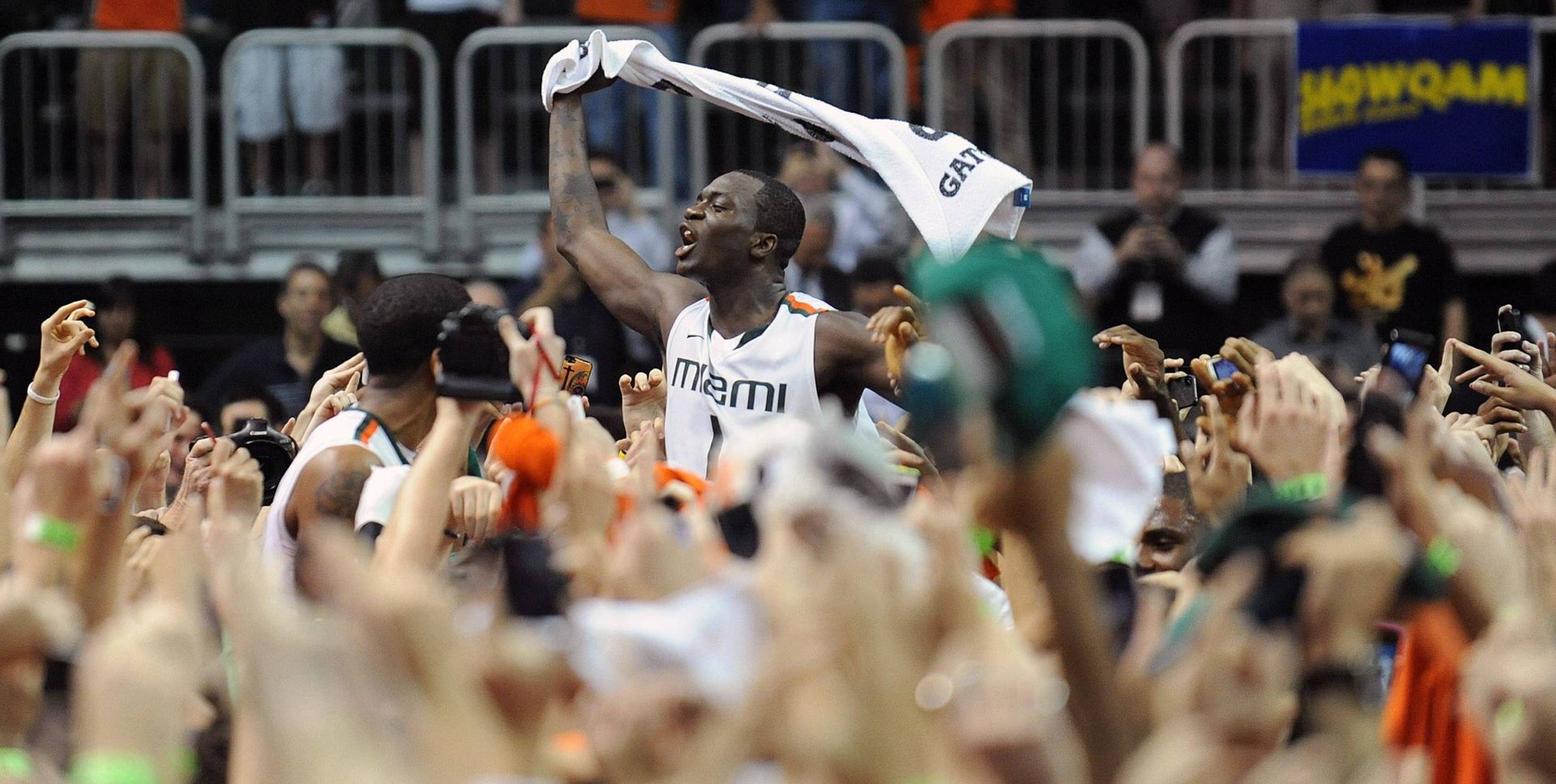 CORAL GABLES, Fla. (AP) – With a steady din coming from the sea of orange behind the visitors’ basket, No. 1-ranked Duke had a tough time making a shot.

The Blue Devils went more than 8 minutes without a field goal in the first half Wednesday night, and a sellout became a blowout for No. 25 Miami, which delighted a boisterous crowd with a 90-63 victory.

The defeat was the third-worst ever for a No. 1 team, and Duke’s worst in nearly five years.

Miami (14-3, 5-0 Atlantic Coast Conference) beat a No. 1 team for the first time, taking control with a stunning 25-1 run midway through the opening half. The Blue Devils missed 13 consecutive shots despite numerous good looks, while four Hurricanes hit 3-pointers during the run that transformed a 14-13 deficit into a 38-15 lead.

They regained the top spot this week but seemed rattled by the capacity crowd, only the 10th in 10 years at Miami’s on-campus arena. Students began lining up for seats outside the arena almost 24 hours before tipoff, a rarity for the attendance-challenged Hurricanes.

But South Florida loves a winner, and the Hurricanes are alone atop the league standings. They won their sixth consecutive game and beat Duke for the second straight time – but only the fourth time in the 19-game series.

Miami had been 0-6 against No. 1 teams. Coach Jim Larranaga also beat a No. 1 team for the first time.

Seth Curry, Tyler Thornton and Quinn Cook went a combined 1 for 29 for the Blue Devils, who shot a season-low 30 percent. Rasheed Sulaimon led them with 16 points.

Miami senior center Reggie Johnson came off the bench in his first action since being sidelined with a broken left thumb Dec. 18. He had two points and five rebounds in 16 minutes.

Kadji made two 3s during the Hurricanes’ first-half spurt, then capped it with a three-point play. Duke shot 22 percent in the first half, including two for 11 on 3-pointers, and trailed 42-19 at halftime.

There was no letup by the Hurricanes to start the second half. They scored the first seven points to lead 49-19.

A Duke mistake early in the second half had coach Mike Krzyzewski red-faced and on the court, screaming at his team. But he couldn’t inspire a turnaround.

”Over-rated,” the fans chanted with 3 minutes left. When the game ended, they poured onto the court and mobbed their team.

Miami, ranked this week for the first time in three years, improved to 8-0 at home.

The attendance for tonight’s game was 7,972, which is the highest ever for a UM basketball game at the BankUnited Center.

Miami is on a five-game home ACC winning streak, dating back to last season. The Canes have defeated Wake Forest, Florida State, Boston College, Maryland and Duke at the BankUnited Center in that span. Miami’s last home ACC loss was Feb. 15, 2012, when North Carolina defeated the Canes 73-64.

Miami moves to 4-15 in the all-time series against Duke, having won the last two contests. The Canes are 3-6 against the Blue Devils at home, 0-2 at neutral sites and 1-7 on the road.

This is Coach Larranaga’s first win over a No. 1 team and the first time in UM’s history that the Canes have defeated a first-ranked opponent. Miami improves to 1-6 against No. 1 teams.

Miami built its lead to 30 points with 18:25 remaining in the game, scoring the first five points of the second half. The Canes led by over 30 points numerous times, getting it up to 34 with 1:40 remaining. This was the Canes’ largest lead of the 2012-13 season, beating the previous high of 31 against Charlotte on Dec. 14, 2012.

Shane Larkin finished with 18 points and 10 rebounds for his first career double-double.

Kenny Kadji, who finished the game with 22 points, has had double digit scoring in 14 of the 17 games this season, including the last eight games.

Julian Gamble made the Canes’ first basket of the night, a dunk with 19:29 remaining in the first half. He finished with five points and 10 rebounds.

He also tied his career high with four blocks, previously set on Jan. 13, 2013 at Maryland.

Reggie Johnson played in his first game since Dec. 18, 2012. Johnson finished the game with two points and five rebounds in 16 minutes of playing time.