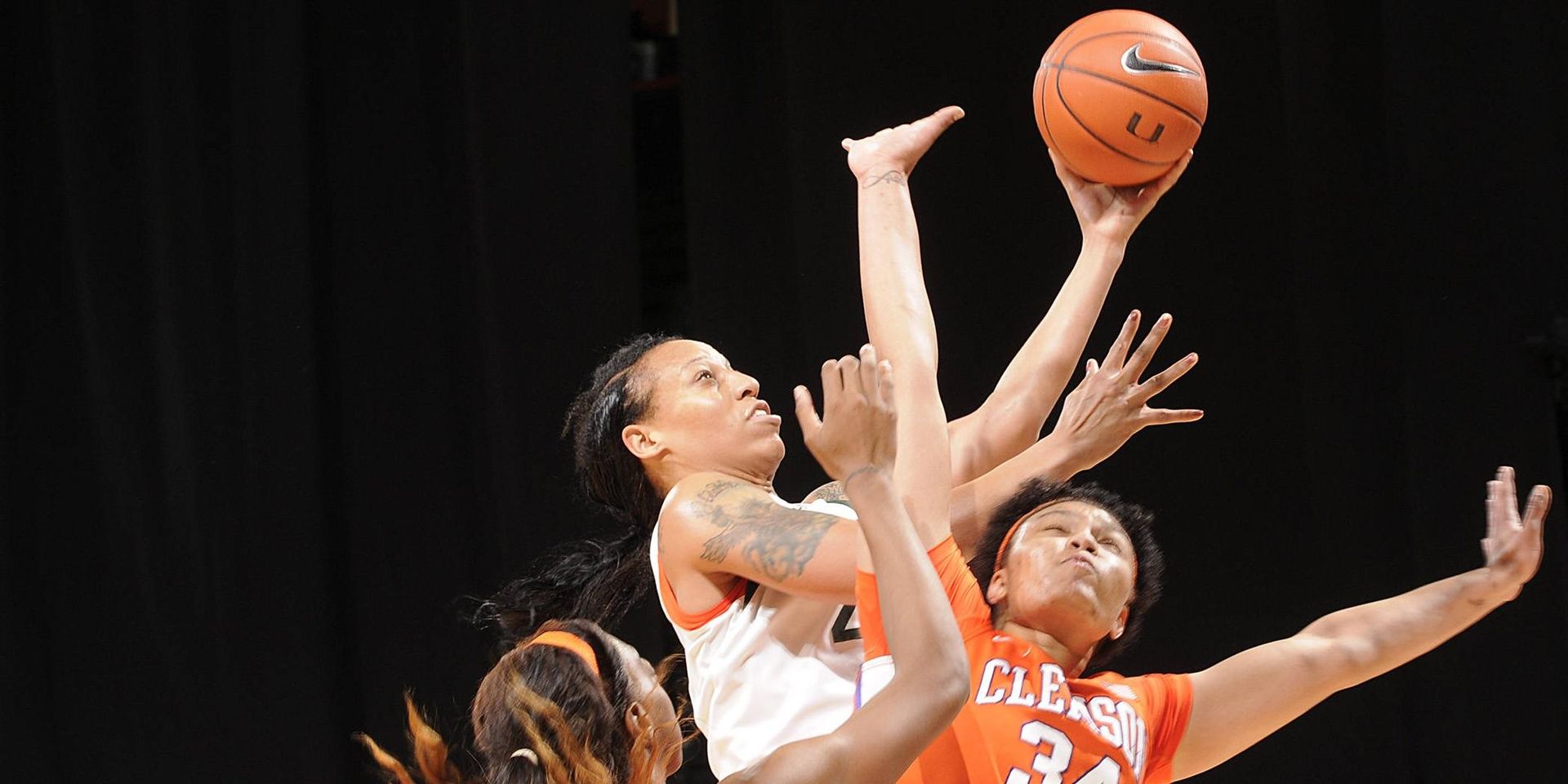 WBB Stays on Top at Home With Win vs. GT

CORAL GABLES, Fla. — The Miami Hurricanes got back to their winning waysWednesday night, edging the Georgia Tech Yellow Jackets at the BankUnitedCenter by a final score of 71-65.

After dropping back-to-back contests to ranked teams ontheir most recent road trip, the Hurricanes (13-4, 4-2 ACC) bounced back athome with strong shooting and a career night from senior Shawnice Wilson.

“We were really on the ropes there,” head coach Katie Meiersaid. “We had a tough weekend and we needed to respond to that.”

Wilson led the way for the hosts in the first half,finishing with 11 points in just 13 minutes of work. The 6-foot-5 centereclipsed her previous career-high of 17 on a layup with 10:42 still left in thegame.  By night’s end, Wilson had finished with a team-best 21 points andjust one rebound shy of her second straight double-double.

Coach Meier reinforced her confidence in the team’s seniorright before tip-off.

“Before the game, I said [to Shawnice], ‘it’s time for youto have a career night,’ right when they announced her in the lineup. Shesmiled and said ‘I’m ready.’ And she was.”

Wilson knew her play would be pivotal to the Hurricanes, whowere playing without starting point guard Michelle Woods due to the flu.

“I knew I needed to step up, especially because we’re downplayers,” she said. “I made sure I was there for my team and did what I had to do. It feels great.”

Despite the final outcome, it was Tech who took control inthe first half. The Yellow Jackets’ early lead reached as high as seven beforean 8-2 run over the final 4:52 cut the deficit to one point by halftime. Miamientered the locker room trailing 31-30.

“That’s all this game was, it was about mental toughness andguts,” Coach Meier said. “I thought Georgia Tech hit some really big shots.”

Miami used a quick start to the second half to jump out to a42-37 lead by the first media timeout. Two layups from Wilson sandwiched arounda three-pointer from Yderstrom increased the Hurricanes’ lead to seven with13:16 to go.

But the Yellow Jackets would not go down without afight.  The visitors came roaring back to take a 55-54 lead on a wildthree-pointer from Brittany Jackson with less than eight minutes remaining. Thefreshman paced the Jackets with a game-high 23 points.

After the game, Meier pointed to the play of her three keyseniors – Stroman, Wilson and Yderstrom – as crucial to the victory.

“It’s really fun to see them knowing and welcoming thepressure, and just responding to it with a complete gut check.”

The Hurricanes next travel to Charlottesville, Va., for amatchup with Virginia. Tip-off for the Jan. 20 matchup is set for 2 p.m.