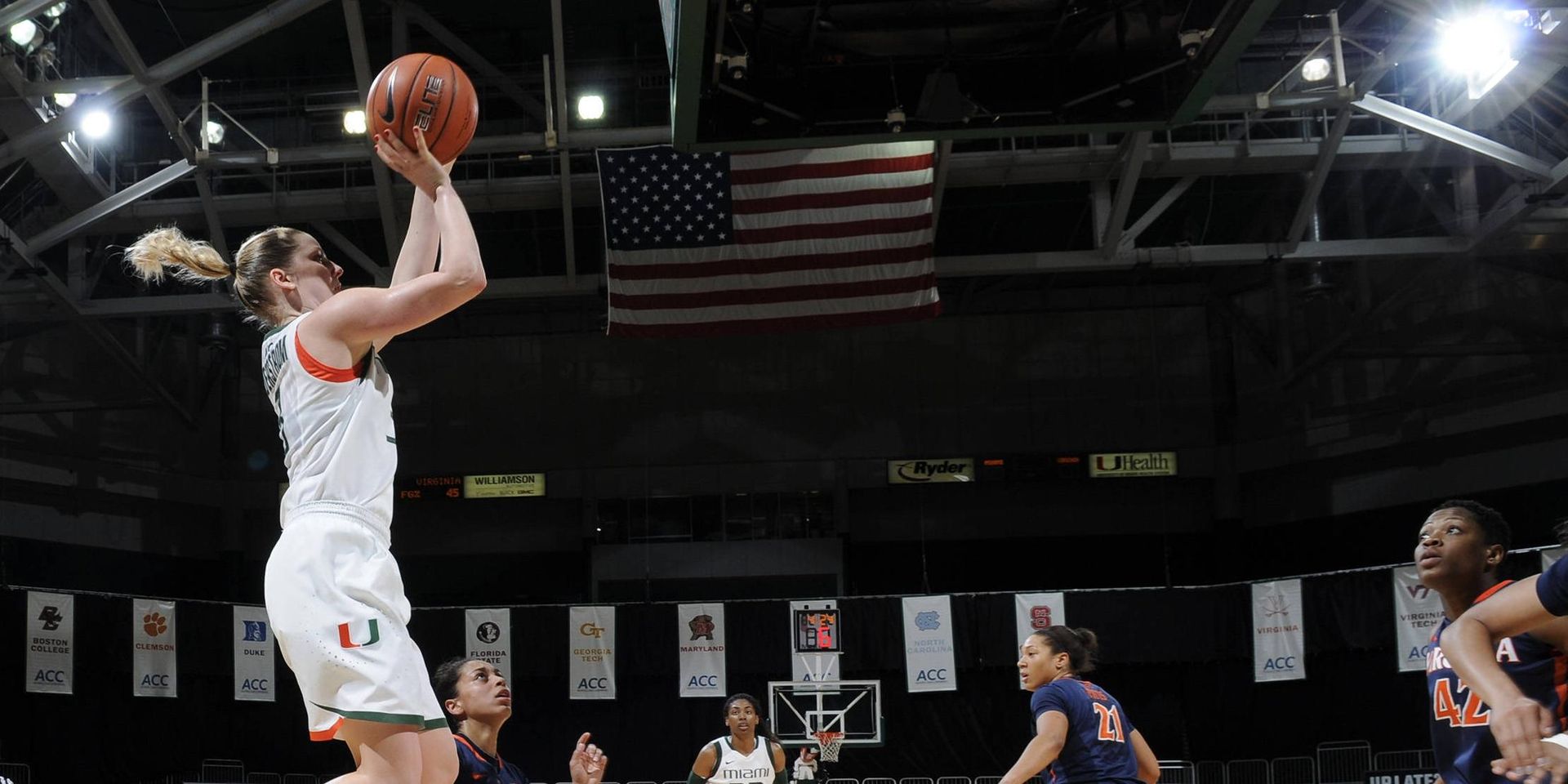 THE GAME
The No. 24/25 Miami Hurricanesembark on one of their tougher challenges of the young season when they travelto College Park, Md., for a matchup with No. 10 Maryland Thursday night. Tipofffor the Atlantic Coast Conference showdown is set for 7 p.m. from the ComcastCenter.

The Hurricanes,entering the contest atop the standings with a perfect 3-0 mark, are riding afive-game winning streak. Last time out, Miami ended its homestand on a highnote by toppling Virginia 58-52 at the BankUnited Center.

Miami’s perfectconference record will be put to test by the Terrapins (11-3, 2-1 ACC),considered among the nation’s premier teams. Maryland, boasting a flawless 7-0record at home, is paced by the conference’s leading scorer Tianna Hawkins(19.0 points per game, 10.0 rebounds per game) and reigning ACC Player of theYear Alyssa Thomas (15.2 points, 10.2 rebounds).

Miami senior MorganStroman became the 22nd Hurricane to score 1,000 points in her career, as shescored seven points against FAU.

CANES TOUGH TO BEAT IN ACC PLAY
In Miami’s last five games, Miamisenior guard Stefanie Yderstrom is averaging 18.4 points per game and has hit19 of her 29 three-pointers in those five games.

Since the beginningof the 2011-12 season, Yderstrom has made 97 three pointers, more than anyother player in the ACC.

CANES TOUGH TO BEAT IN ACC PLAY
Since the 2010-11 season, Miami is28-4 in Atlantic Coast Conference play, second only to Duke (29-3). In thatspan, the Canes are flawless inside the BankUnited Center, winning 17 straightACC games.

With additional winsover Clemson and Virginia, Miami has opened ACC play with a 3-0 record for justthe second time since joining the league in 2004.

BIG-TIME TEAM ON THE SMALL SCREEN
The Jan. 13 game atFSU will be the second of nine regular season games to be televised thisseason.

GREAT GAME, GREAT SEASON
Morgan Stroman may have had her bestgame of her career on Dec. 8 against Davidson. The senior recorded the 19thdouble-double of her career with 17 points and 13 rebounds. However, she filledthe stat sheet, leading the Canes with a career-high six assists, four blocksand four steals.

On the season,Stroman is tied for the team lead with three double-doubles, leads the teamwith 8.2 rebounds, 2.4 steals and 1.5 blocks and is second on the team with12.4 points per game.

GETTING OFF ON THE RIGHT FOOT
After their rout of UNF, theHurricanes are 32-9 in season-opening games and are a combined 24-3 when they openthe season at home, including a perfect 8-0 record when opening the season atthe BankUnited Center.

MEIER ENTERS EIGHTH SEASON AT MIAMI
In 2012-13, head coach Katie Meierand her staff will begin their eighth year at the helm in Coral Gables. The Hurricanesadvanced to the NCAA tournament second round for the second consecutive season,finishing second in the Atlantic Coast Conference with a 14-2 record. Overall,Miami finished with a 26-6 record, the third straight 20-win season for Meier.

CANES ENTER SEASON IN THE POLLS
For the secondconsecutive season, the Hurricanes enter their year with a spot in each the APand the ESPN/USA Today Coaches polls. Miami was ranked No. 23 in the coaches andNo. 24 in the AP according to the voters. UM is currently ranked No. 25 in thecoaches and No. 24 in the AP polls.