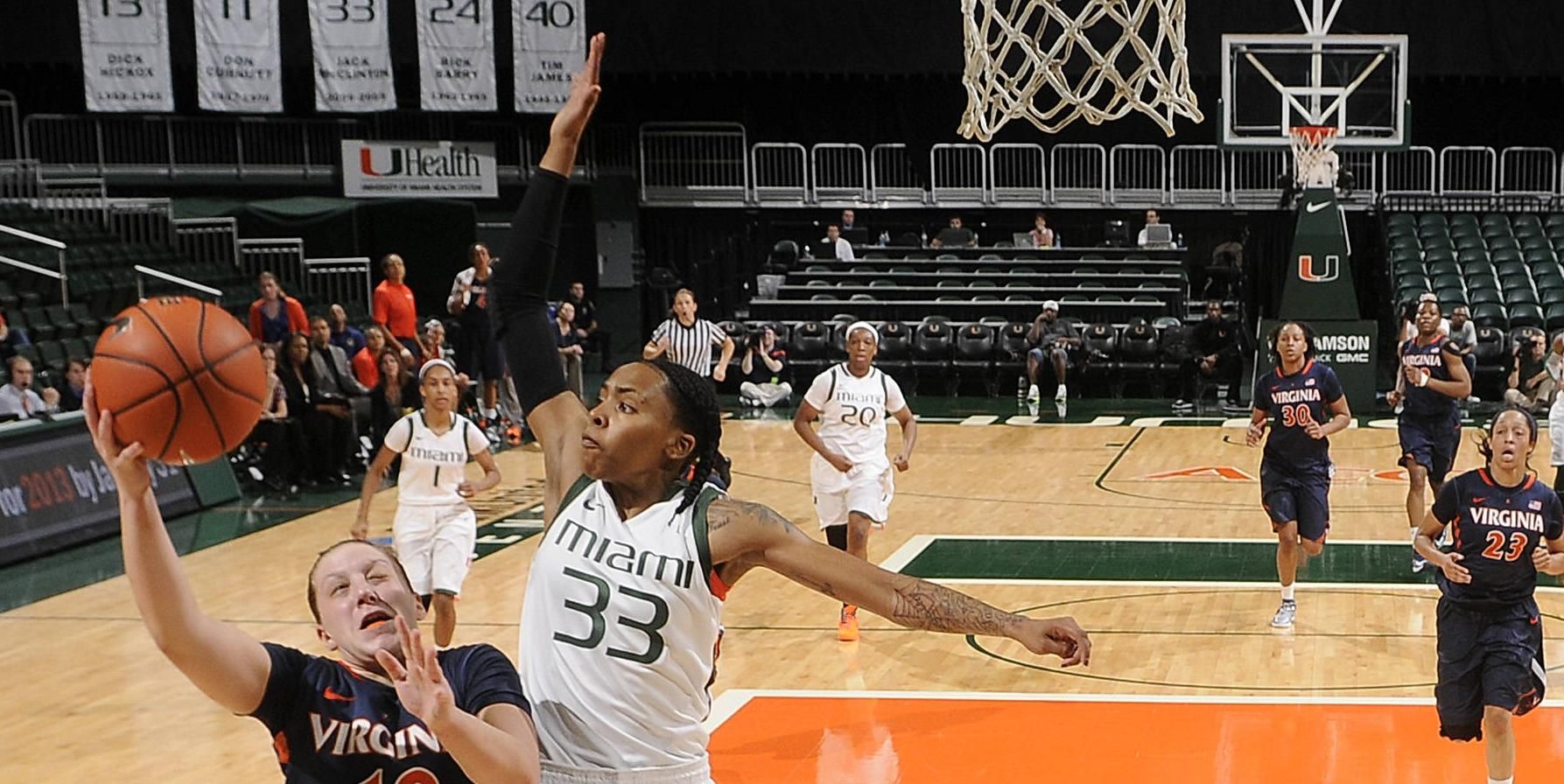 CORAL GABLES, Fla. — The Miami Hurricanes improved to 3-0 in the Atlantic CoastConference for just the second time in program history, toppling the VirginiaCavaliers 58-52 Sunday afternoon at the BankUnited Center.

Seniors Stefanie Yderstrom and Morgan Stroman combined for30 points in the win, Miami’s 10th-straight at home and fifth-straight overall.

Neither team was able to pull away in the first half, evenafter the Hurricanes (12-2, 3-0 ACC) opened the game on a 7-2 run in just overtwo minutes. A three-pointer from Yderstrom opened the scoring, while afast-break layup from Stroman put Miami up by five with 17:41 to go.

Sophomore Suriya McGuire provided first-half fireworks ofher own, racing back for an impressive block off the backboard on Cavaliers’junior Kelsey Wolfe midway through the period. Another strong athletic displayfrom McGuire, this one on a tightly-contested lay-up on the offensive end, gaveMiami a 22-19 advantage with 8:03 left.

“That was an enormous game for Suriya McGuire,” Meier said.”That’s fun. That’s why we love this team. Everyone stays in it.”

Seven different Hurricanes registered points in the firstframe, as the hosts took a 29-25 lead into the locker room.

A strong start to the second half, where Miami held thevisitors without a field goal for a stretch of nearly five minutes, helped theHurricanes’ lead balloon as high as 14 with 13:52 to go.

Meier pointed to her team’s halftime tradition of writingdown the necessary adjustments on the locker room white board as essential tothe surge.

“They nailed it,” she said.

But the Cavaliers erased the deficit in just under fourminutes, exploding on a 17-2 run to take a 46-45 advantage.

“It was a quick run,” Yderstrom said. “We were actually alittle bit surprised. I think we lost focus a bit.”

Miami would respond, as Yderstrom’s third three-pointer ofthe night gave the Hurricanes a four-point advantage with 5:33 to go. Sixstraight points from McGuire in the game’s final stages, including a dagger ofa three-pointer with 1:32 left, helped keep the Hurricanes perfect in theirconference slate.

“When the minutes go down, in the second half, both teamsare tired,” McGuire said. “You have to stay focused. It’s what team wants itmore.”

“We’re exhausted. That was just a really, really good winfor our program,” Meier said. “Virginia is a very good team with a lot ofthings that can give you fits.”