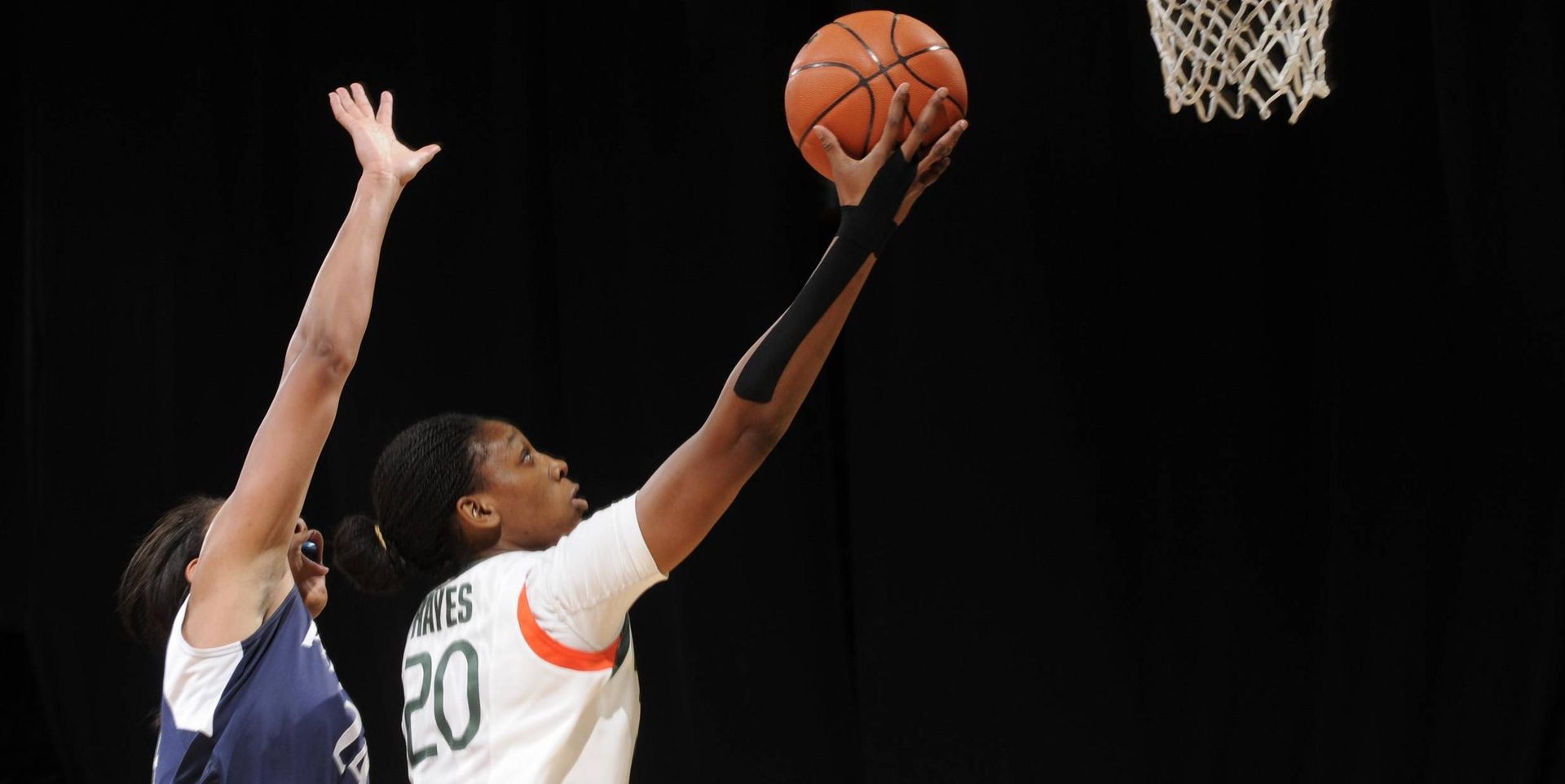 Meeting new people and learning a new city can bechallenging to anyone. But for someone shy like Keyona Hayes, that challengecan often seem terrifying.

Hayes moved a lot as a child, living all over Georgia andmeeting new people more often than she would have liked.

“Growing up in Georgia was fun,” Hayes said. “But I didn’treally stay in the same spot. We moved around a lot so I had to make friends afew different times.”

The 18-year-old freshman is admittedly introverted and hasnever enjoyed talking to others, especially those she barely knows. Growing up,Hayes rarely said a word off the court. Instead, the 6-foot-1 forward preferredto let her stellar play on the court talk for her.

Hayes, who was an all-state selection at St. Francis High inMarietta, Ga., was not the typical superstar. People generally associatebig-time players with big time egos, but Hayes never liked talking aboutherself or her accomplishments.

Her talent drew the attention of several universities,including Miami, South Carolina and Charlotte. While many recruits love therecruiting process and all the attention that comes with it, Hayes did notenjoy the need to converse with coaches at prospective universities.

“Recruiting was fun,” Hayes said. “A lot of coaches calledbut I don’t really like to talk to people, so I e-mailed them and talked tothem on Facebook. I tried not to talk on the phone too much, but it was a funprocess and definitely a good experience.”

Ironically, it was conversations with Miami coach KatieMeier that drew Hayes to the Hurricanes.

“I really love Katie and she’s a really good coach,” Hayessaid. “She makes you feel like you’re important and like she needed you. Shehas a lot of energy and is always making you feel great. She’s a very goodperson and has a great personality.”

While on a recruiting visit to the Miami campus, Hayes gotto know Meier and her future teammates. She instantly felt comfortable aroundthe team and knew she wanted to join the Hurricane family.

“The team made me feel like I was a part of the family, eventhough I wasn’t,” Hayes said. “That’s something most teams don’t have. Theymade me feel like I had been here for a long time, even though I had just metthem. It was a good feeling.”

Like most freshmen, Hayes has an upperclassman that shelooks up to and tries to emulate. Fortunately for Miami, that upperclassman iscaptain Morgan Stroman.

“We connected when she first stepped foot on campus in thesummer,” Stroman said. “I stayed in the village so she came over and hung outwith me and Suriya [McGuire] once. I have a close bond with a lot of people onthe team. When practice was going on, the coaches would say, ‘you two need tostick together. She can be really good if she looks up to you.’ I took that asa challenge to be a better leader, not just for her, but for everyone on theteam. We hang out a lot and she’s been taking it in.  I really like how she plays on the court.”

Stroman has been a contributor for Meier’s team since theday she arrived in 2009. Now, the senior forward is contributing to thedevelopment of Hayes, whom many believe could be the next great player atMiami.

“I really wish I had the energy that Stro has,” Hayes said.”I would be a whole different person because Stro has a lot of energy. I’mgoing to try to be that way.”

Stroman, who leads the Canes in scoring, rebounding, blocksand steals, thinks Hayes can be the type of player she wants to be immediately.

“She just needs to step out of her comfortzone,” Stroman said. “I think she is a little stuck on how other people wouldreact if she were to be more energetic. I think as long as you’re out thereplaying basketball, you really don’t need to worry about what anybody elsethinks. She can do it and we’ve seen her do it in spurts. We just need that tobe a continuous thing.”

In her brief time at Miami, Hayes has forged bonds withStroman and the rest of her teammates. Those strong relationships off the courthave proven beneficial on the court, as Miami is off to a strong start thisseason.

“The whole team really hangs out a lot,” Hayes said. “I lookup to them and listen to what they have to say. They’re really good people. Ifeel like our relationship off the court helps us play better on the court.”

Hayes has been a key contributor as a freshman, providingoffense and rebounding off the bench for the Canes. She has already scoreddouble-digit points in three of Miami’s first eight games, including a14-point, 11-rebound effort against FAU.

“I came in ready to help,” Hayes said. “I knew what toexpect from Coach and what she wanted from me. I came here ready to work and Iearned my spot. Coach believed in me and I showed her that I’m ready to play.”

Even though she has had success early in her career, Hayesadmits that she would like to be more consistent. The talented forward seesplenty of room for improvement in her game.

“I’d like to improve my feet,” Hayes said. “They’re kind ofslow. I believe that if I get that a little better, then I’ll be able to movevertically and be alright. I work out with the coaches twice a week outside ofpractice to improve my footwork. It’s already getting a little better because Ican move quicker vertically now than I could before, but I still have a lot ofwork to do.”

Hayes knows that improvement will not come easily. Assomeone who has always gotten by on natural ability, it has been challengingfor Hayes to stay after practice and work on her game. But she has seenprogress already and that has motivated her to continue to strive forexcellence.

“I want to improve my work ethic,” Hayes said. “I neverreally had to work for anything, so it’s been kind of a challenge. At first, itwas hard because I wasn’t used to having to do extra workouts outside ofpractice. Now, I’m ready and always looking to get another workout in.”

The freshman has big expectations for herself. While she ispleased with the way her career has begun, she aspires to be one of theall-time great Hurricanes by the time she leaves Miami.

“I think my career is going to go well,” Hayes said. “Ithink I can become and All-American. I want to make the All-ACC team. I justhave to work hard to get to that level.”

Stroman sees plenty of signs that Hayes can become the starplayer that she hopes to be. She just needs to continue working hard to improveoff her natural ability.

“There are so many people who come up to me andsay they like Keyona Hayes and they like how she plays,” Stroman said. “I agreewith them. I think that by the time she leaves here she is going to be one ofthose players that is going to be remembered. She can catch anything you throwto her. She rebounds like crazy. Her field goal percentage is really good too.If she keeps it up and bumps her energy a little, she could be one of thegreatest players to ever play here.”