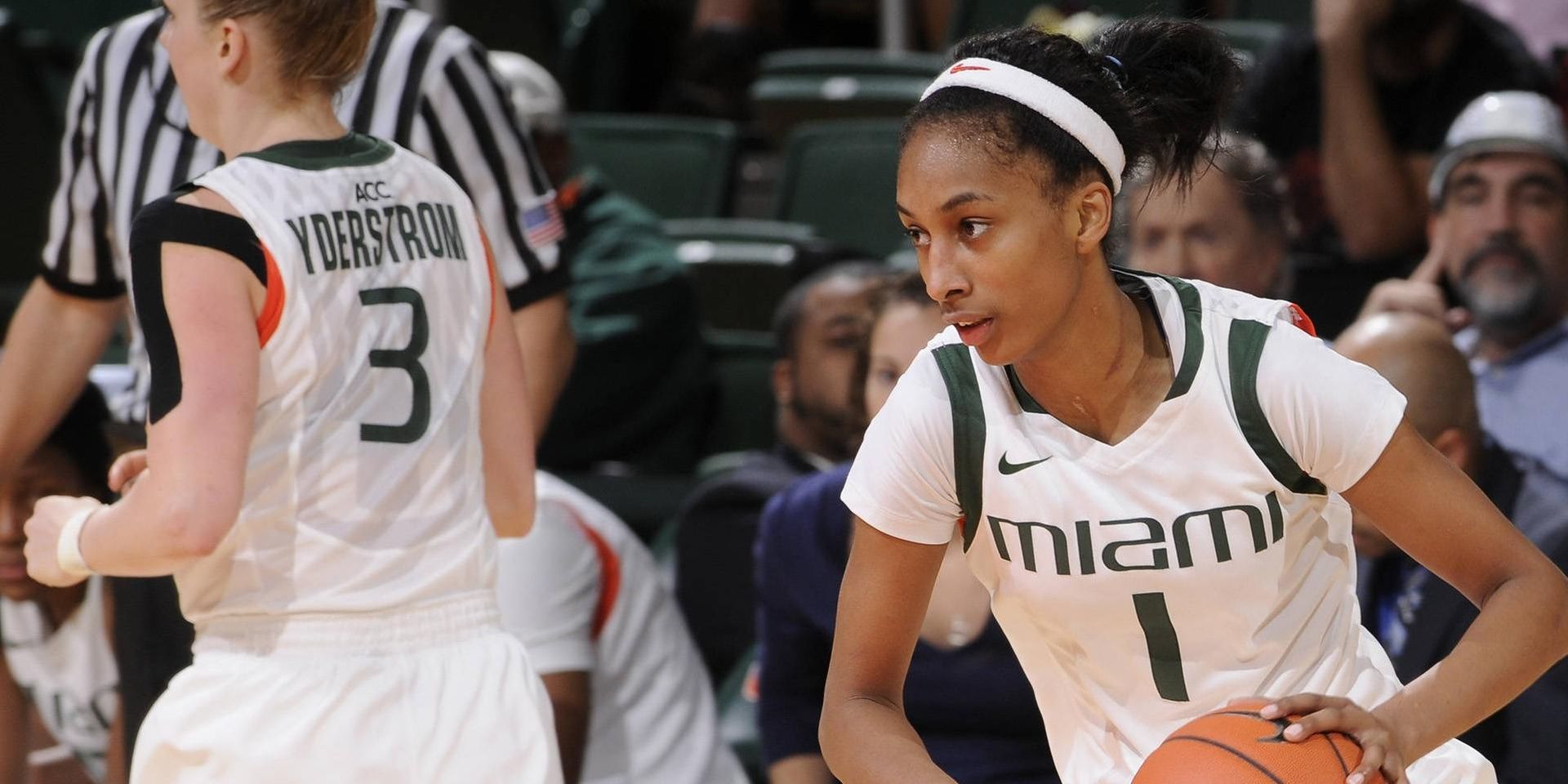 Newcomers to the college game, freshmen often make theirteammates and coaches cringe at some of the ill-advised decisions they make onthe floor.

Inexperienced and error-prone freshmen rarely are expectedto play key roles on a team, but Caprice Dennis is not a typical freshman. The5-foot-8 point guard has earned Miami coach Katie Meier’s trust by playing akey role in the Hurricanes’ early success this season.

“It means a lot because forfreshmen, it’s tough to come in and get a lot of minutes,” Dennis said. “Youhave a lot of upperclassmen and coaches trust them because they’ve been aroundand the coaches know what they’re going to do. To gain Coach Meier’s trust insuch a short period means so much to me. I love that she trusts me.”

While Meier has been impressed with Dennis’ performance onthe court, it’s the 18-year-old’s hard work off the court that has helped herbecome a key member of Miami’s rotation.

“I really enjoy when we’re in film, whether it’s one-on-oneor with the guards or the entire team, she has the answer,” Meier said. “I willrewind something and ask what they see and she knows it and has a solution forit. Players are going to make mistakes. They may dribble the ball off theirfoot sometimes, but I haven’t seen her make a lot of choice mistakes or a lotof thought mistakes. For a freshman, that’s a big deal.”

Making the right choice is something Dennis has been tryingto do for much of her life.  Growing upin Detroit, Mich., Dennis honed her on-court decision-making skills on a dailybasis.

“Detroit is a wonderfulcity,” Dennis said. “A lot of people have different opinions on it, but beingin the city day-in and day-out, I love it. It’s always basketball there.Everybody is playing basketball and ever since I was a little kid, I always hada ball dribbling up and down the street. Wherever you go, you see someoneplaying basketball and I was one of those people.”

While her daughter madegreat decisions on the court, Gwendolyn Gray wrestled with a difficult decisionoff the court. Following Dennis’ freshman year at Detroit Pershing High, Grayallowed her daughter to move in with assistant girls’ basketball coach ShawnHill.

“My freshman year afterhigh school, I moved in with my assistant coach at the time,” Dennis said. “Forthe rest of my years, he was my head coach and he had nine children. I considerthem my family so I consider myself to have 11 siblings. I moved in with himand stayed there until I came to college.”

Dennis has a specialrelationship with Hill, whom she calls “Dad.” The two speak often and shecredits Hill for helping get her to where she is today, both as a basketballplayer and as a person.

“We still have a connection,”Dennis said. “He really helped me out a lot as far as getting focused onschool. I really appreciate that. My mom had a lot to do with it, too. She madethe decision to let me go. That was a big decision and I’m grateful for that.”

Dennis made her first big decisionduring her senior year at Pershing. An all-state guard, Dennis was recruited bymajor programs like Kentucky, Texas and Kansas. She ultimately committed to theJayhawks, but her strong decision-making skills led her to re-evaluate herchoice to be sure it was the right one.

“When I was committed toKansas, the reason I de-committed wasn’t because I didn’t want to go to Kansas.It was because I wanted to be sure that I made the right decision. I came outof it with the idea that I was still going to Kansas. That was my No. 1school.”

Everything changed whenDennis visited Miami. While Dennis was a Jayhawk coming into her visit, sheleft Coral Gables a Hurricane.

“I came on a visit here andI immediately had a great connection with Coach Meier,” Dennis said. “Iconnected with the players, too, but the connection I had with Coach Meier soquickly was overwhelming. I was like ‘wow, this is where I really want to be.’I talked to my family about it and they agreed that they loved the school andthe program and we all made the decision that I should come here.”

Meier noticed somethingspecial about Dennis during the guard’s official visit. While the two sharedtime at practice and at a team function at Meier’s home, Miami’s coach feelsthe strongest bond between the two was formed over breakfast the next morning.

“We had the kids over to my house and I saw her observe theteam,” Meier said. “She didn’t get really involved and she wasn’t completelyoutgoing, but I definitely was watching her watch my team. I could see hersmile at really quaint moments that meant a lot to me but some kids missed.Maybe it was Morgan Stroman just being silly with Suriya McGuire or having aplayer patting a coach on the head messing around, just that casualness that wehave and I saw her see that stuff. “

“So the next day at breakfast I said ‘I want to talk to youabout some stuff I saw yesterday because people miss what’s special down here.’They miss this relationship. I asked her what she saw in practice and herobservations were that we build confidence and give our players a lot of power.She said she saw that we trusted them. She saw things that weren’t justobvious. I thought she was a high-level thinker. She’s very wise. So we talkedon a higher level than our normal talks with a recruit. I wasn’t selling myselfor the program or the school. I was very interested in her and what made hertick and what was important to her. I think that is what started it.”

That same morning, Dennis noticed Meier’s genuine interestin her as a person. The young guard felt a connection similar to therelationship she had with Hill. That is when she knew she was going to be aHurricane.

“She made me feel like Icould trust her,” Dennis said. “That is a big thing with me being able to trustsomebody completely. She is such a wonderful person and if you’re around heryou know that she has this burst of enthusiasm at all times. No matter how herday is going, you won’t know because she is always presenting herself with alot of enthusiasm. From the beginning, I really liked her personality and sincethen, our relationship has grown a lot. I’ve gotten to know her better and I amalways trying to pick her brain on and off the court to make our relationshipbetter every day.”

Along with her outstandingbasketball talent, Dennis’ strong decision-making skills have traveled with herto Coral Gables. She leads Miami’s freshmen in minutes played and has made keycontributions in the team’s victories over No. 6 Penn State and Alcorn State.

“In our gamesagainst Penn State and Alcorn State, Caprice made huge plays for us,” Meiersaid. “Unfortunately, we needed those plays against Alcorn – which shouldn’thave happened but we needed them – and she was in the lineup and withstood therun and answered it. In those two games, I have put her in to answer those runsand that shows a lot of confidence in a freshman.”

Despite her early success,Dennis recognizes that there is room for improvement in her game and she hasdecided to be proactive in her efforts to mature as a player.

“There is always room toimprove,” Dennis said. “My shooting can get a lot better. I don’t know myshooting percentage, but I know it’s not the best. I’d like to get that up andI really want to focus on my ball handling. I think I can work on that a lottoo.”

Dennis also hopes to addmuscle to make her more of an offensive force around the basket. At just 134lbs, Dennis has struggled at times this season to get to the rim. But thefreshman guard is confident her work with strength coach Alex Parr will helpher finish strong in traffic going forward.

While physical strength issomething Dennis lacks, her mental toughness is off the charts. Meier marvelsat her ability to remain calm and composed in the most pressure-filledsituations.

“Sheis very calm and steady Eddie,” Meier said. “I remember right before TennesseeI said, ‘Caprice, are you excited?’ And she said, ‘they play ball just like Ido.’ It was a straight pulse with no spiking. It has not been a roller coasterwith her at all. It’s just a matter of her understanding her role and playing.If you give her some freedom, she is going to make the right choices.”

Relaxedunder pressure, Caprice Dennis is avoiding the typical freshman mistakes andhelping the Hurricanes make the right decisions on and off the court.