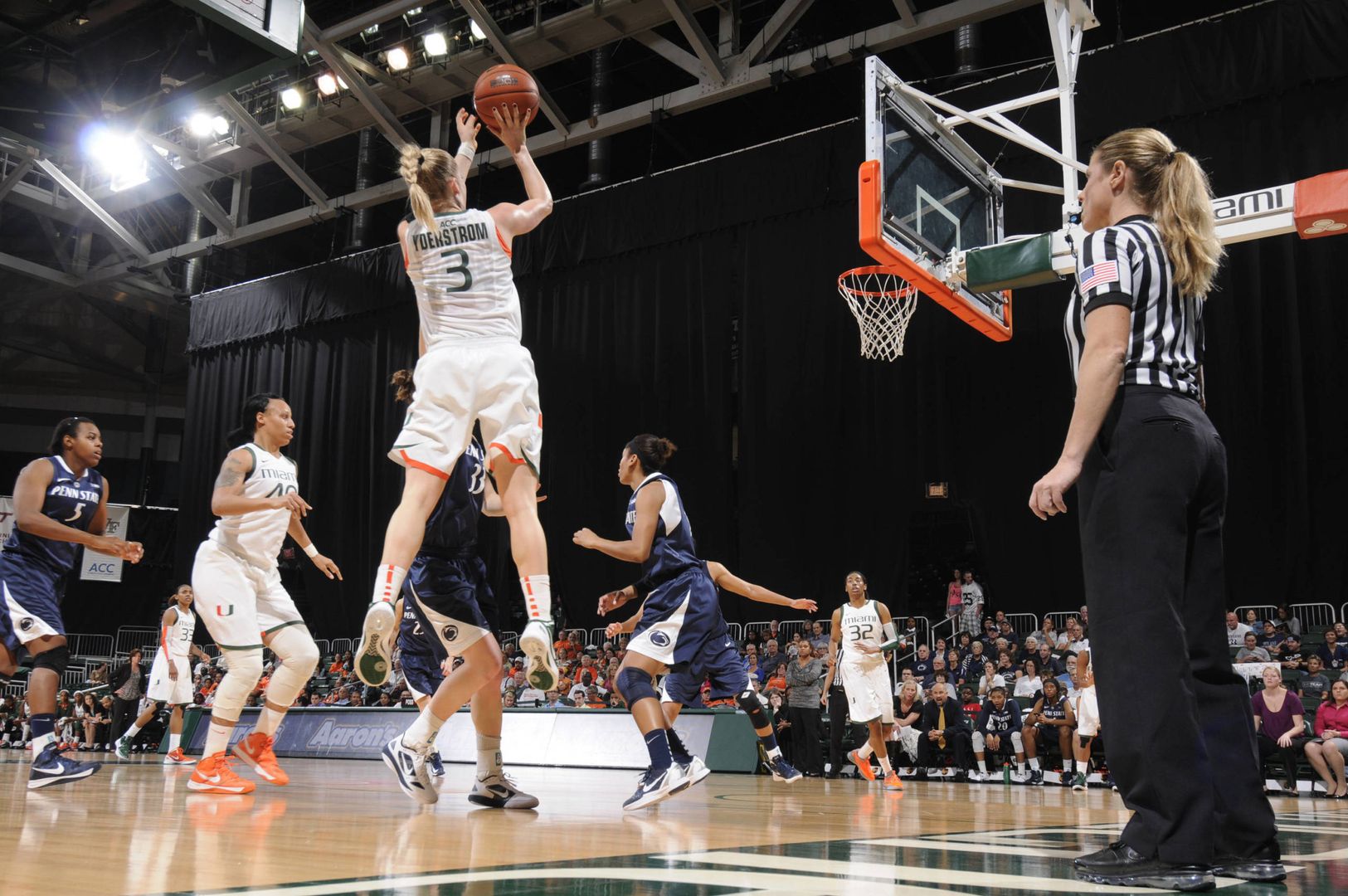 WBB Back to the Hardwood vs. Alcorn State

THE GAME
Just four days after an emotionalwin over No. 6 Penn State, the University of Miami women’s basketball team willplay at the BankUnited Center for the fifth consecutive game when Alcorn Statepays a visit to Coral Gables on Monday evening.

Yderstrom led allscorers with 19 points against FAU and Stroman finished each contest with 11 rebounds.Against Radford, Stroman also poured in 22 points, just one shy of hercareer-best. It was her first double-double of the season. For her efforts,Stroman was named the tournament’s MVP, while Yderstrom earned all-tourneyhonors.

Woods came on strongin the second half of Miami’s loss to Tennessee, helping the Canes erase a27-point deficit, scoring a team-high 17 points. After five games, the guard isaveraging 12.5 points per game, good for second on the team

On the season, Brownis averaging 5.0 points and 4.5 rebounds per game and is shooting 46 percentfrom the floor.

MEIER ENTERS EIGHTH SEASON AT MIAMI
In 2012-13, head coach Katie Meierand her staff will begin their eighth year at the helm in Coral Gables. TheHurricanes advanced to the NCAA tournament second round for the second consecutiveseason, finishing second in the Atlantic Coast Conference with a 14-2 record.Overall, Miami finished with a 26-6 record, the third straight 20-win seasonfor Meier.

1,000 POINT CLUB
Miami senior MorganStroman became the 22nd Hurricane to score 1,000 points in her career, as shescored seven points against FAU in the first game of the UM ThanksgivingTournament. Riquna Williams and Shenise Johnson were the last two Canes tosurpass the milestone.

STARTING A NEW STREAK
Prior to its Nov. 18 loss vs. No.20 Tennessee, the Hurricanes held the nation’s second-longest home win streakat 41 games. Miami had gone 1,001 days without dropping a game inside theBankUnited Center. Since the  loss, Miamihas won two straight home games.

A PREMIER SCHEDULE
In addition to the always excitingACC schedule, Miami welcomes two top-ranked programs to the BankUnited Center.On Nov. 18, the Canes faced Tennessee for the second consecutive season. Thenon Nov. 29 No. 6 Penn State will make a trip to Coral Gables as part of theACC/Big Ten Women’s Basketball Challenge.

BIG INSIDE PRESENCE
The Hurricanes saw their 6-6center, Shawnice Wilson in action for the first time last season after shetransferred from Pitt. The Pittsburgh native started to come into her own latein the season and against NC State (Feb. 16), she secured her firstdouble-double with 17 points and 17 rebounds. It was the first win for theCanes at Reynolds Coliseum.

STEPPING UP
Before Stroman’s injury lastseason, Yderstrom averaged 9.1 points per game and scored in double figures innine of 19 games. In the final 13 games of the season, the Swede scored indouble digits nine times, twice setting her career high with 22 points vs.Virginia Tech, then 26 at No. 8 Maryland. The guard averaged 13.5 points andconnected on 28 3-pointers.

FORMER STARS IN THE WNBA
In April, Miami’s Shenise Johnsonand Riquna Williams were selected by the San Antonio Silver Stars and the TulsaShock with the fifth and 17th picks, respectively, in the 2012 WNBA Draft.Johnson and Williams became the third and fourth players in Miami’s history tobe selected in the WNBA Draft. Williams was named to the 2012 WNBA All-RookieTeam.

HISTORIC DEFENSIVE EFFORT
The Hurricanes heldUNF to just 24 points on 14 percent shooting in the season-opening 77-24victory. The 24 points allowed in UM history against an NCAA opponent.

CANES GIVE BACK
Miami women’sbasketball played host to its annual Thanksgiving tournament Nov. 23-24 and theCanes took some time away from the court to give back to those in need.

Head Coach KatieMeier and her coaching staff and players partnered with the Miami Coalition forthe Homeless to feed over 200 of the Coalition’s members from various sheltersthroughout the city.

Those traveling withthe Coalition enjoyed the game between the Hurricanes and Florida Atlantic.Immediately afterwards, Coach Meier, Miami players and coaches joined the MiamiCoalition for the Homeless in the BankUnited Center Multi-Purpose Room for ameal.

STATS AREN’T EVERYTHING, BUT…
The Canes dominatedcertain statistical categories in the season-opening win against UNF:outscoring their opponent 42-4 in the paint; holding a 43-8 advantage in pointsoff turnovers and forcing 34 turnovers.