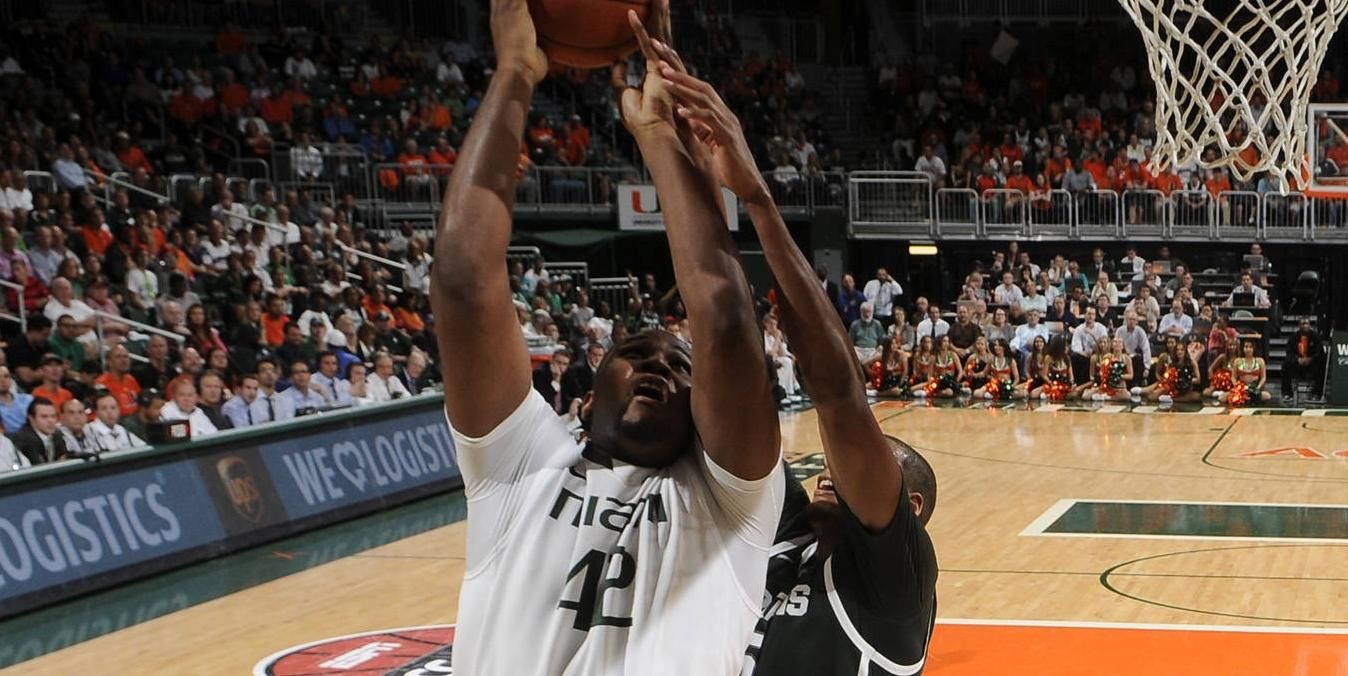 AMHERST, Mass. (AP) — Reggie Johnson scored 19 points and grabbed 13 rebounds as Miami pulled away in the second half to defeat Massachusetts 75-62 Saturday for its fourth straight victory.

The Hurricanes (5-1) led for most of the second half, but a 3-pointer by Raphiael Putney, followed by a driving layup by Jesse Morgan, put the Minutemen (3-3) ahead 52-51 with 8:29 remaining.

In Miami’s 67-59 upset of No. 13 Michigan State on Wednesday, the Spartans clogged the middle to prevent the 6-foot-10, 292-pound Johnson from making an impact. Against the Minutemen, who pressured the perimeter, the senior center had more room to operate. He shot 6-for-13 from the floor and made 7 of 8 free throw attempts.

His six blocked shots were a key part of the Hurricanes’ defense, which held UMass to 28.6 percent shooting (18 of 63) including 7 of 32 from 3-point range.

Durand Scott added 15 points and Shane Larkin had 14 for the Hurricanes.

Miami has won four-straight games after starting the season 1-1.

With 19 points and 13 rebounds, Reggie Johnson notched his 17th-career double-double. He has three in five games this year.

Johnson recorded 6 blocked shots against UMass, setting a new career high. His previous career high was five, which he had accomplished twice, the last time vs. FAU last year, in his return from his knee injury.

Johnson pulled down 13 rebounds, marking the fifth game this season he’s had nine or more boards.

Miami outscored UMass 32 to 18 in the paint.

I didn’t even think he was going to be able to play today. Down the stretch, he stepped up big time for us.

On UMass’ run in the second half to pull ahead:

The huge key is not to let them go on one of those huge spurts. When Putney hit those two threes in a row, it looked like they could, but our defense held the next couple of times to get us the lead back.

Reggie is a big fellow. With some teams, it’s hard to get the ball to him because they crowd the lane, but UMass’ style is to stretch it out and pressure you, so it opens up more for him. I thought they did a good job on him, but he did a great job of being consistent and working.

On Johnson being able to hit free throws:

He shot his free throws very well. When you are big guy, you are going to get fouled and you see in the NBA, a lot of those big guys cannot make foul shots. It’s nice when you have a big guy who can.