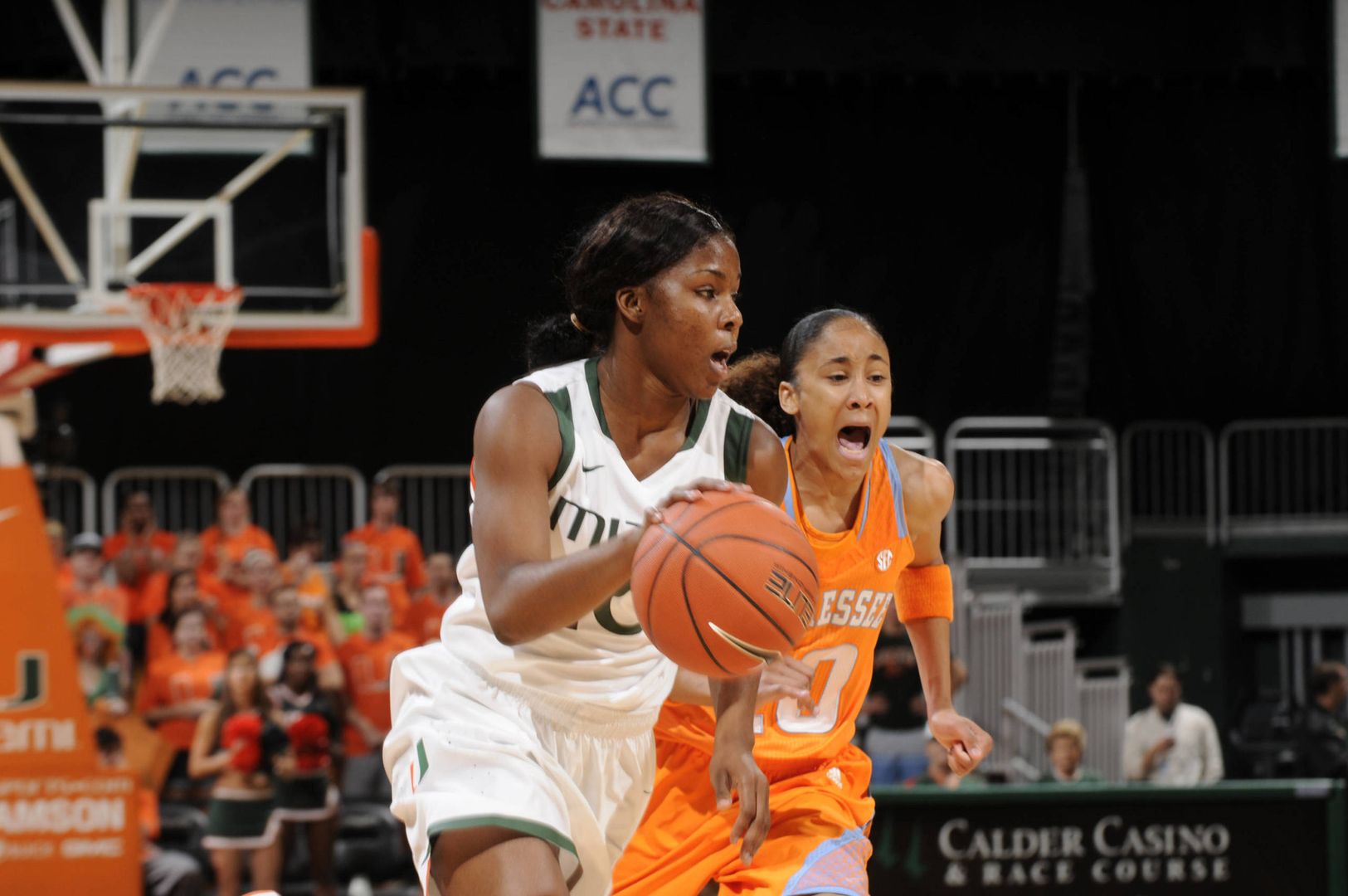 Miami will open theevent with a 5 p.m. matchup on Friday with Florida Atlantic. It will be the17th meeting between the two programs, which  has never seen the Canes lose.

Saturday’sconsolation game will start at 5 p.m. and will be followed immediately by thechampionship.

No.23 Canes Pull Away From NSU in Exhibition

NO SOPHOMORE SLUMP FOR WOODS
In her first game of the 2012-13 season, sophomore Michelle Woods hit fivethree-pointers on her way to a career-best 19 points. In the very next game,the guard from Naples, Fla., scored a new career-best of 20 points in a 69-63win at Richmond.

Woods came onstrong in the second half of Miami’s loss to Tennessee, helping the Canes erasea 27-point deficit, scoring a team-high 17 points. After three games, the guardis averaging 18.7 points per game and is shooting at an impressive 52 percentclip from the floor.

GETTING OFF ON THE RIGHT FOOT
After their rout of UNF, the Hurricanes are 32-9 in season-opening gamesand are a combined 24-3 when they open the season at home, including a perfect8-0 record when opening the season at the BankUnited Center.

MEIER ENTERS EIGHTH SEASON AT MIAMI
In 2012-13, head coach Katie Meier and her staff will begin their eighthyear at the helm in Coral Gables. TheHurricanes advanced to the NCAA tournament second round for the secondconsecutive season, finishing second in the Atlantic Coast Conference with a14-2 record. Overall, Miami finished with a 26-6 record, the third straight20-win season for Meier.

HITTING THE BOOKS
Stefanie Yderstrom has been named to the ACC All-Academic Team each of thelast two seasons. The senior is a sports administration major, has earned anoverall 3.28 GPA and a was named to the dean’s list last semester with a 3.66GPA.

LOOKING TO START A NEW STREAK
Prior to its Nov. 18 loss vs. No. 20 Tennessee, the Hurricanes held  the nation’s second-longest home win streakat 41 games. Miami had gone 1,001 days without dropping a game inside theBankUnited Center.

A PREMIER ScHEDULE
In addition to the always exciting ACC schedule, Miami welcomes twotop-ranked programs to the BankUnited Center. On Nov. 18, the Canes will face Tennesseefor the second consecutive season. Then on Nov. 29 Penn State will make a tripto Coral Gables as part of the ACC/Big Ten Women’s Basketball Challenge.

WELCOME BACK
In her first game on the court since an Achilles’ tendon tear midwaythrough the 2011-12 season, senior forward Morgan Stroman scored 17 points on7-of-11 shooting and led her team with eight rebounds.

In theirdebuts, Dennis finished the night with five points, three assists and twosteals. Hayes had four points and Keen added three rebounds and a free throw.

BIG INSIDE PRESENCE
The Hurricanes saw their 6-6 center, Shawnice Wilson in action for thefirst time last season after she transferred from Pitt. The Pittsburgh nativestarted to come into her own late in the season and against NC State (Feb. 16),she secured her first double-double with 17 points and 17 rebounds. It was thefirst win for the Canes at Reynolds Coliseum.

STEPPING UP
Before Stroman’s injury last season, Yderstrom averaged 9.1 points per gameand scored in double figures in nine of 19 games. In the final 13 games of the season,the Swede scored in double digits nine times, twice setting her career highwith 22 points vs. Virginia Tech, then 26 at No. 8 Maryland. The guard averaged13.5 points and connected on 28 3-pointers.

FORMER STARS IN THE WNBA
In April, Miami’s Shenise Johnson and Riquna Williams were selected by theSan Antonio Silver Stars

and the TulsaShock with the fifth and 17th picks, respectively, in the 2012 WNBA Draft.Johnson and

Williamsbecame the third and fourth players in Miami’s history to be selected in theWNBA Draft. Williams was named to the 2012 WNBA All-Rookie Team.

CANES AGAIN ENTER THE SEASON IN THE POLLS
For the second consecutive season, the Hurricanes enter their year with aspot in each the AP and the ESPN/USA Today Coaches polls. Miami was ranked No.23 in the coaches and No. 24 in the AP according to the voters. UM is currentlyreceiving votes in both polls.

STATS AREN’T EVERYTHING, BUT…
The Canes dominated certain statistical categories in the season-openingwin against UNF: outscoring their opponent 42-4 in the paint; holding a 43-8advantage in points off turnovers and forcing 34 turnovers.

CANES TO GIVE BACK TO THE COMMUNITY
Miami women’s basketball hosts its annual Thanksgiving tournament thisweekend and the Canes will take some time away from the court to give back tothose in need.

Head CoachKatie Meier and her coaching staff and players have partnered with the MiamiCoalition for the Homeless to feed over 200 of the Coalition’s members fromvarious shelters throughout the city.

Thosetraveling with the Coalition will enjoy the game between the Hurricanes andFlorida Atlantic at 5 p.m. Immediately afterwards, Coach Meier, Miami playersand coaches will join the Miami Coalition for the Homeless in the BankUnitedCenter Multi-Purpose Room for a meal.

The mostrecent Division I Graduation Success Rates are based on the four enteringclasses from 2002-2003 through 2005-06.

Motley, a 5-9guard from Woodside High School, has been ranked the No. 27 overall prospectand the seventh best point guard in the nation by ESPN HoopGurlz.

Thomas isranked the 48th best point guard in the nation by ESPN HoopGurlz. In 2011, the5-6 guard led the Buchholz High School Bobcats to the semifinals of the FloridaGirls State Basketball Playoffs. She is the younger sister of Hurricane legendLamar Thomas.