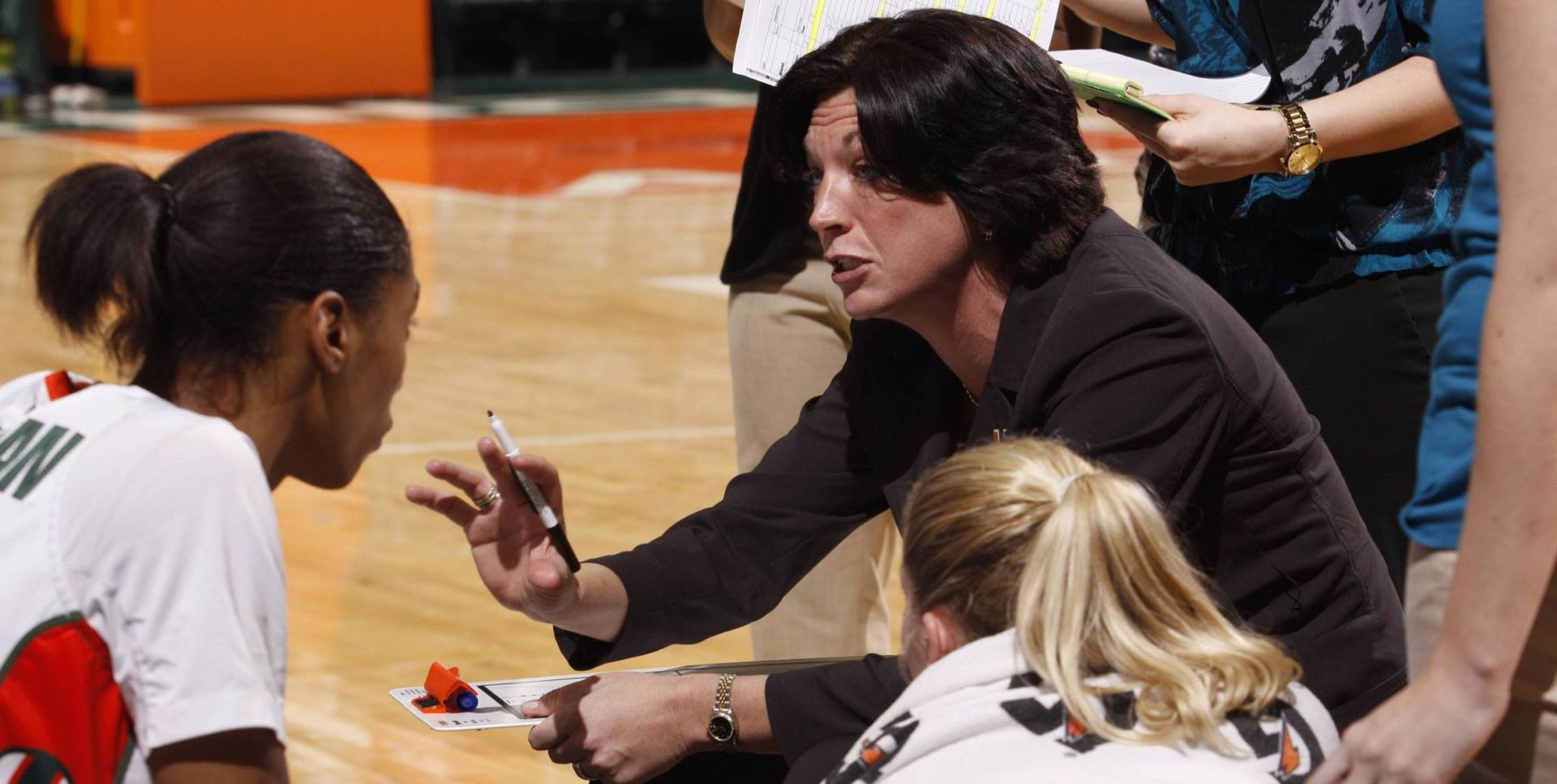 On the highest shelf of the grandiose bookcase that standsproudly behind Katie Meier’s desk, overlooking the war room belongingto one of college basketball’s great generals, lies one word spelled out inwhite ceramic tiles: dream.

Below on her desk, cluttered with papers ranging frompractice notes scribbled in black ink to the lengthy game tape analysisscattered about, the scene is anything but dream-like.

But as she prepares for the Hurricanes’ looming matchup withperennial powerhouse Tennessee, a challenge for which she feels both excitedand confident, Sunday’s contest seems very much like a dream realized.

“I’m not going to put a helmet on and hope Tennessee missesshots,” Meier says. “We’re going to be Miami, and we’re going to figure outwhat the best Miami is for this match-up. I hope they play the best game oftheir year, and I hope we’re ready for it.”

Rewind to a particularly bleak span beginning back in 2006,her second season as head coach of the Hurricanes, when Miami compiled a totalof 30 wins over the next three years. The team struggled in conference play,often looking overmatched once starters were out of gas. The Hurricanes wonnine games in 2007-2008. Nine.

“It was tough. I’ve coached games where we’ve lost by 60,”Meier recalls, shaking her head.

But press fast forward, and hit pause just before the startof the 2010-11 season. Watch the next few games, and you’ll see the latterstages of a brilliant transformation in place since Meier’s arrival in 2005.

The type of ferocity, recklessness, and high energy thatdefined her team’s play on the BankUnited Center parquet would catalyze thebeginnings of a 41-game home winning streak, the second-longest streak in thenation and one very much alive to this day.

By year’s end, Miami had made the unprecedented leap frombottom of the cellar to top of the conference, and the Canes had racked up 28wins and an NCAA Tournament berth.

Think it was easy? Dream on.

Meier recalls a stretch in 2006 when the Canes playedMaryland, North Carolina and Duke – all of whom earned No. 1 rankings at somepoint that season – within a two-week span. All three would advance to theFinal Four.

“I’ve coached games here where, straight up, we didn’t havea chance,” Meier says. “We’re not in that position anymore.”

As the Hurricanes prepare for Sunday, the growth andmaturation of the program is evident – even to her.

“When you’re building a team, and you go up against a greatprograms like Tennessee, or Rutgers, or any of the teams we’ve played, you haveto have depth,” Meier said. “In the early years, you knew you had five thatcould play with five. But when your five got tired and their second five was upagainst your tired first five, you would lose the game.”

After graduating two of the conference’s most prolificscorers last season, the Hurricanes opened their 2012-13 campaign with the mostsound defensive performance in program history, holding North Florida to arecord-low 24 points. They won the game by over 50 points.

Still, Miami entered practice the next day hungry and readyto atone for the previous night’s poor shot selection and lack of teamchemistry. With a collective intensity matched only by their own head coach,the Hurricanes know 2012-13 is the type of year to dream – and dream big.

“I don’t care who we’re playing right now, we have asolution to whatever problems they pose,” Meier said. “I told the team thatit’s on us this season. I really want them to know that about themselves.”