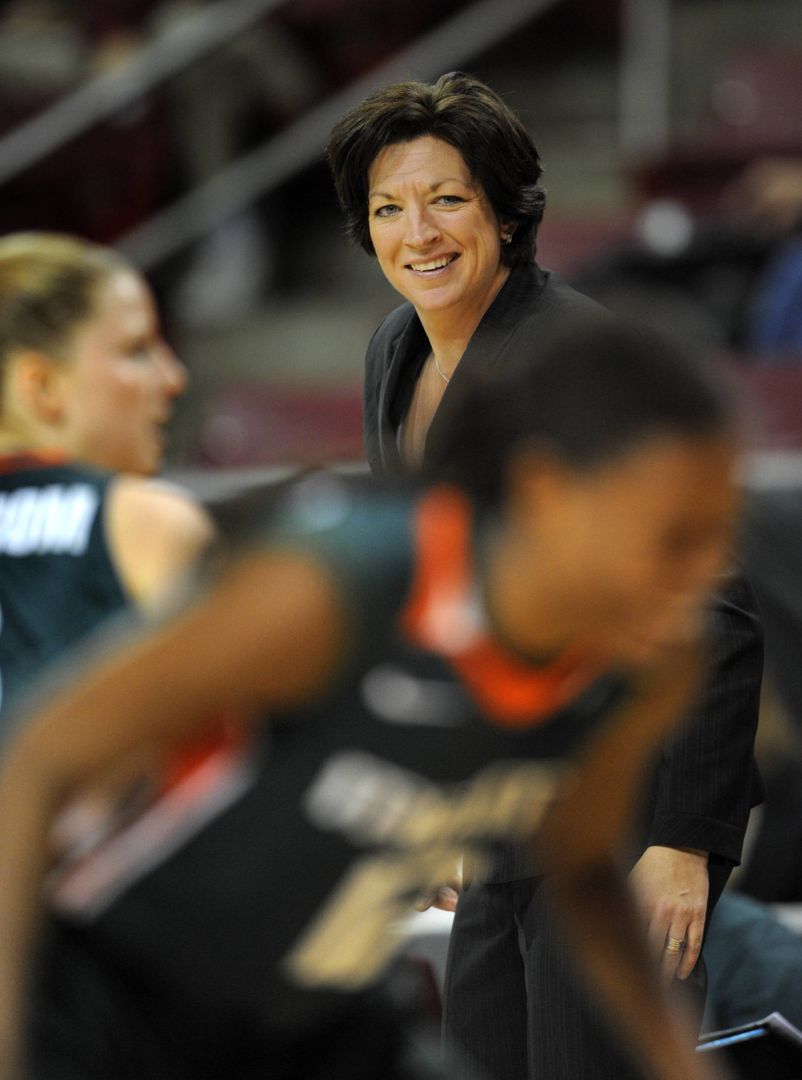 CORALGABLES, Fla. – The Universityof Miami women’s basketball 2013 early signing class is ranked No. 11 in thenation by the All Star Girls Report.

“This signing class will beanother Top 20 class and I think that has become the norm at the University ofMiami,” head coach Katie Meier said. “That is a total credit to my staff forthe efforts they have committed to recruiting, in addition to the success wehave been having on the court.

“Recruiting is the lifelineof any major program. We went up against some big time programs this year andwere successful in getting three very dynamic, athletic and threatening guards.”

Motley, a 5-9 guard fromWoodside High School, has been ranked the No. 27 overall prospect and theseventh best point guard in the nation by ESPNHoopGurlz.

Averaging 24.3 points pergame in her junior season, Motley lead the Wolverines past tournament favoriteDFW-Elite 2012 for an upset win. Despite a broken nose, she delivered timelyfree throws and defensive stops to secure the victory. As the undisputed teamleader, Motley was recognized by ESPN as being a court-aware, athleticpenetrator with a knack for scoring.

“Adrienne is a completeplayer,” Meier said. “She is polished, smooth and has a very high basketballI.Q. She loves our style of play and is a perfect fit for our system. She isalso that multidimensional guard that can play the point and bring you thecerebral game, while being able to move off the ball and score in bunches.

“She is a floor leader, andshe and I have a ‘like mind’. I’m really excited to have someone that can thinkthe game and play fast. She will be a very successful player at the Universityof Miami.”

Nigia Greene is a four-starprospect according to ESPN HoopGurlz.She is ranked No. 41 overall, and the ninth-best guard in the nation.

The 5-10 guard transferredfrom Southwest Atlanta to St. Francis High School before her junior season, inwhich she averaged 18.6 points, 2.0 assists and 2.4 rebounds per game. She ledthe Knights to the third round of the 2012 Georgia Girls State BasketballPlayoffs.

“Nigia is very athletic, butalso is a high I.Q. wing player who will give our fans some of the sameathleticism and open-court play that we have gotten used to at Miami,” Meier said.”She is extremely skilled and fundamental, which is rare in a player that isknown as a slasher.

“Defensively, I think she hasa chance to be one of the best players we have ever signed. I think she willshore up that wing position for us. She comes from a super background and isanother special person that we are excited to have.”

Jessica Thomas is ranked the48th best point guard in the nation by ESPN HoopGurlz. In 2011, the5-6 guard led the Buchholz High School Bobcats to the semifinals of the FloridaGirls State Basketball Playoffs. She is the younger sister of Hurricane legendLamar Thomas.

“Jessica is already a Cane,with her brother, Lamar, having his history at The U,” Meier said. “She is soexcited to be a part of the family, but I think she is going to surpriseeverybody. She is a little bit under the radar, but we have had our eye on herfor a long time and have been able to see her grow and develop.

“We have had her at our campsand she’s very hard to guard. She’s a little reminiscent of Renee Taylor, inthat she pushes tempo, is always in attack mode and can also play off the balland get herself free for some shots. She has an incredible motor. She was oneof the most competitive kids I saw all summer in the recruiting circuit.

“This combination of thesethree guards is quite a statement for where our program is going. They are allvery different from each other, but they all share passion for the game andplay with an extremely high level of intensity, which has me the most excited.”

BretMcCormick of All Star Girl’s Report Recruiting Service
Miami comesin with the No.  11 recruiting class inthe country. The ACC dominated the top recruiting classes across the country.Miami has definitely replenished their backcourt. They have had extraordinaryguards in the past and will continue for the future. They are set for fouryears.

Green is a big time guard withgreat all-around game. She is a big guard and can score. Will impact theprogram from Day One.

Motley is great athlete andis tremendous with the ball in her hands. She will run the show for the Canes.

Thomas is explosive to therim, understands the game with a good skill set. Thomas is a sleeper.

KeilMoore of PeachStateBasketball.com
Withtheir 2013 recruiting class, University of Miami coach Katie Meier and herstaff looked to add quality perimeter scoring options. The additions of NigiaGreene of Atlanta, Ga., Adrienne Motley of Newport News, Va., and JessicaThomas of Gainesville, Fla., will do just that.

In 2012, Meier and her stafffocused on post play with their recruiting class, which earned a No. 19 rankingnationally. This year, in an effort to balance the roster Miami focused on theperimeter when they went up to Atlanta, Ga., to score a 5-foot-10 wing like Greenewho plays the game with a smoothness and brings a nice shooting touch everytime she takes the floor. Greene has the size and athleticism to play both wingpositions at the next level and should be able to contribute early in hercareer.

Joining Greene in thebackcourt will be 5-foot-9 point guard Adrienne Motley who is coming off anexcellent summer playing on the club basketball circuit.  Motley should be an excellent fit in CoralGables as she has the ability to push the ball and make quality decisions intransition, but can also orchestrate the pick and roll and make plays in thehalfcourt.

The third addition to theUniversity of Miami for the class of 2013 is Jessica Thomas, Thomas is aninstate pick up who seems to be a great fit for the style of play at theUniversity of Miami.  The 5-foot-6 pointguard likes to push the ball in transition and look for teammates early in thebreak. The Gainesville, Fla., resident will give Miami quality depth in theirbackcourt and a point guard that they can count on to take care of thebasketball and run the offense.

DanOlson of Collegiate Girl’s Report
Jessica Thomas, the sister of Miami great Lamar Thomas, is a very tough pointguard. UM has a knack to find the sleeper in a class. She has had a great highschool career to this point. She may not be the highest rated, but I’m wellaware of who she is. She exhibits speed and athleticism and is a good fit torun Miami’s style of play.

Adrienne Motley is a bigultra-athletic combo guard that can fill it up. She plays up-tempo, can createher own shot and knocks down mid-range jumpers. Katie Meier has made Miami anational name to be able to attract players of this caliber.

Nigia Greene, like Motley, isanother guard with good size and athleticism. If not for a knee injury lastseason, would have been a Top 30 player. She is clearly one of the nation’s topguards.

The Hurricanes have addressed their backcourt needs,as all three are capable of competing at a high level in the ACC.