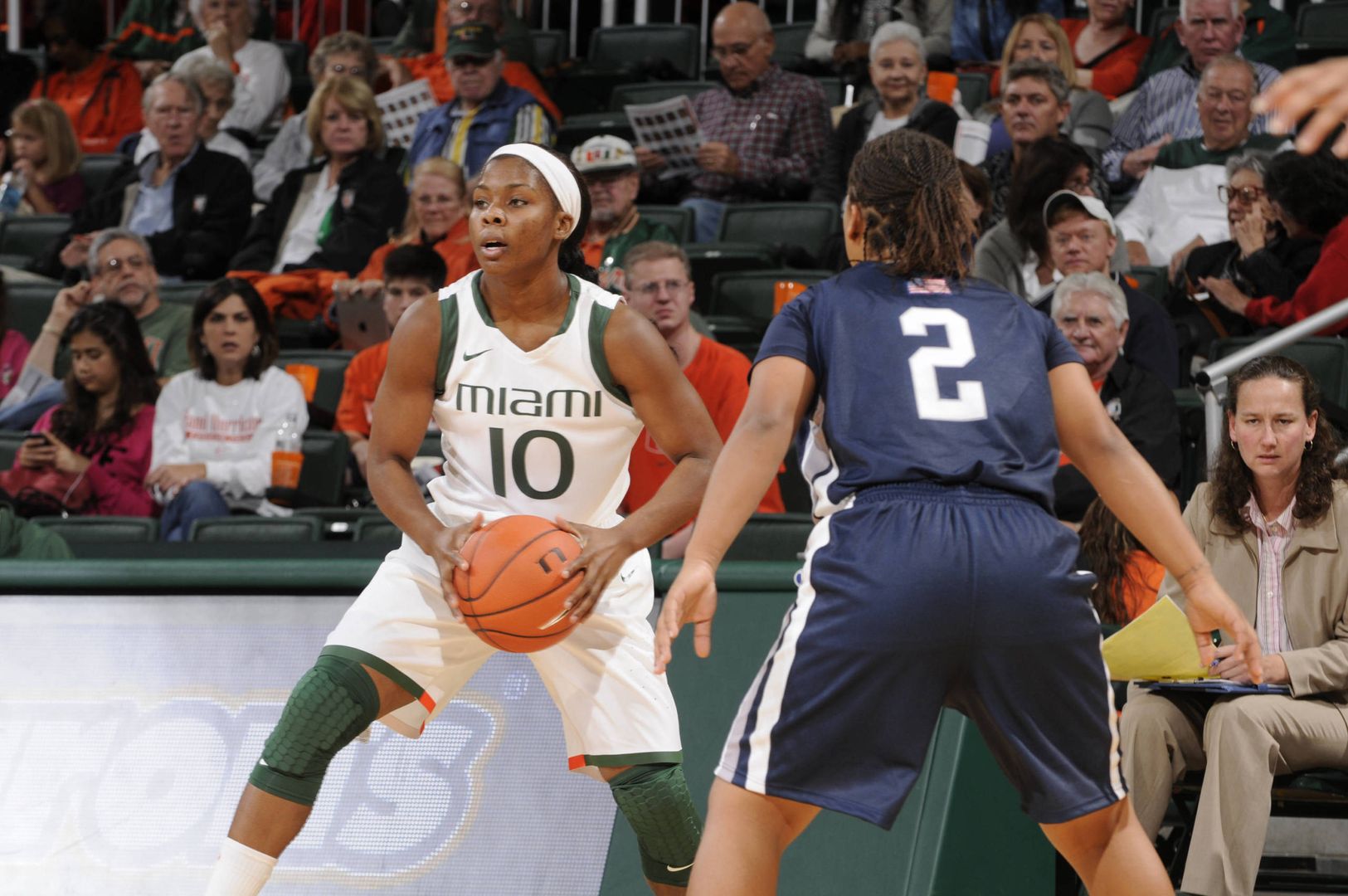 No. 23 Miami Takes to the Road vs. Richmond

THE GAME
Just three days after opening the2012-13 season in record-breaking fashion, the Miami Hurricanes head toRichmond to take on the Spiders, Monday evening at 7 p.m. from Robins Center.

The Canes cruised toa 77-24 win over UNF in their home opener on Friday. The win was the 41ststraight at the BankUnited Center, increasing the school record. The 24 pointsallowed was also the fewest in the program’s history against an NCAA opponent.

Senior MorganStroman made her presence felt in her first game coming back from an Achilles’tendon injury, scoring 17 points and leading Miami with eight rebounds.

Michelle Woodsconnected on five three-pointers on her way to career-best 19 points and PepperWilson added 10 points of her own.

The early roadcontest is the first of only two non-conference away games this season. UM headto Rutgers on Dec. 16.

HURRICANES IN THE NEWS …
WBBDominates UNF in Season Opener, 77-24

No.23 Canes Pull Away From NSU in Exhibition

WBBSet to Take On Nova Southeastern

GETTING OFF ON THE RIGHT FOOT
After their rout of UNF, the Hurricanes are 32-9 in season-opening gamesand are a combined 24-3 when they open the season at home, including a perfect8-0 record when opening the season at the BankUnited Center.

MEIER ENTERS EIGHTH SEASON AT MIAMI
In 2012-13, head coach Katie Meier and her staff will begin their eighthyear at the helm in Coral Gables. The Hurricanes advanced to the NCAAtournament second round for the second consecutive season, finishing second inthe Atlantic Coast Conference with a 14-2 record. Overall, Miami finished witha 26-6 record, the third straight 20-win season for Meier.

HITTING THE BOOKS
Stefanie Yderstrom has been named to the ACC All-Academic Team each of thelast two seasons. The senior is a sports administration major, has earned anoverall 3.28 GPA and was named to the dean’s list last semester with a 3.66GPA.

NOT IN THIS HOUSE
The Hurricanes enter the season with the nation’s second-longest home winstreak. Only Stanford (80) has more consecutive home wins than Miami’s 41 insidethe BankUnited Center. Defending national champs Baylor also has 41 consecutivehome wins. Kentucky and Ohio State are next in line with at 20 straight wins.

A PREMIER SCHEDULE
In addition to the always exciting ACC schedule, Miami will welcome twotop-ranked programs to the BankUnited Center. On Nov. 18, the Canes will face Tennesseefor the second consecutive season. Then on Nov. 29 Penn State will make a tripto Coral Gables as part of the ACC/Big Ten Women’s basketball Challenge.

In theirdebuts, Dennis finished the night with five points, three assists and twosteals. Hayes had four points and Keen added three rebounds and a free throw.

BIG INSIDE PRESENCE
The Hurricanes saw their 6-6 center, Shawnice Wilson in action for the firsttime last season after she transferred from Pitt. The Pittsburgh native startedto come into her own late in the season and against NC State (Feb. 16), shesecured her first double-double with 17 points and 17 rebounds. It was thefirst win for the Canes at Reynolds Coliseum.

STEPPING UP
Before Stroman’s injury last season, Yderstrom averaged 9.1 points per gameand scored in double figures in nine of 19 games. In the final 13 games of the season,the Swede scored in double digits nine times, twice setting her career highwith 22 points vs. Virginia Tech, then 26 at No. 8 Maryland. The guard averaged13.5 points and connected on 28 3-pointers.

FORMER STARS IN THE WNBA
In April, Miami’s Shenise Johnson and Riquna Williams were selected by theSan Antonio Silver Stars and the Tulsa Shock with the f fth and 17th picks,respectively, in the 2012 WNBA Draft. Johnson and Williams became the third andfourth players in Miami’s history to be selected in the WNBA Draft. Williamswas named to the 2012 WNBA All-Rookie Team.

CANES AGAIN ENTER THE SEASON IN THE POLLS
For the second consecutive season, the Hurricanes enter their year with aspot in each the AP and the ESPN/USA Today Coaches polls. Miami is ranked No.23 in the coaches and No. 24 in the AP according to the voters.

WELCOME BACK
In her first game on the court since an Achilles’ tendon tear midwaythrough the 2011-12 season, senior forward Morgan Stroman scored 17 points on7-of-11 shooting and led her team with eight rebounds

STATS AREN’T EVERYTHING, BUT…
The Canes dominated certain statistical categories in the season-openingwin against UNF: outscoring their opponent 42-4 in the paint; holding a 43-8advantage in points off turnovers and forcing 34 turnovers.

The mostrecent Division I Graduation Success Rates are based on the four enteringclasses from 2002-2003 through 2005-06.