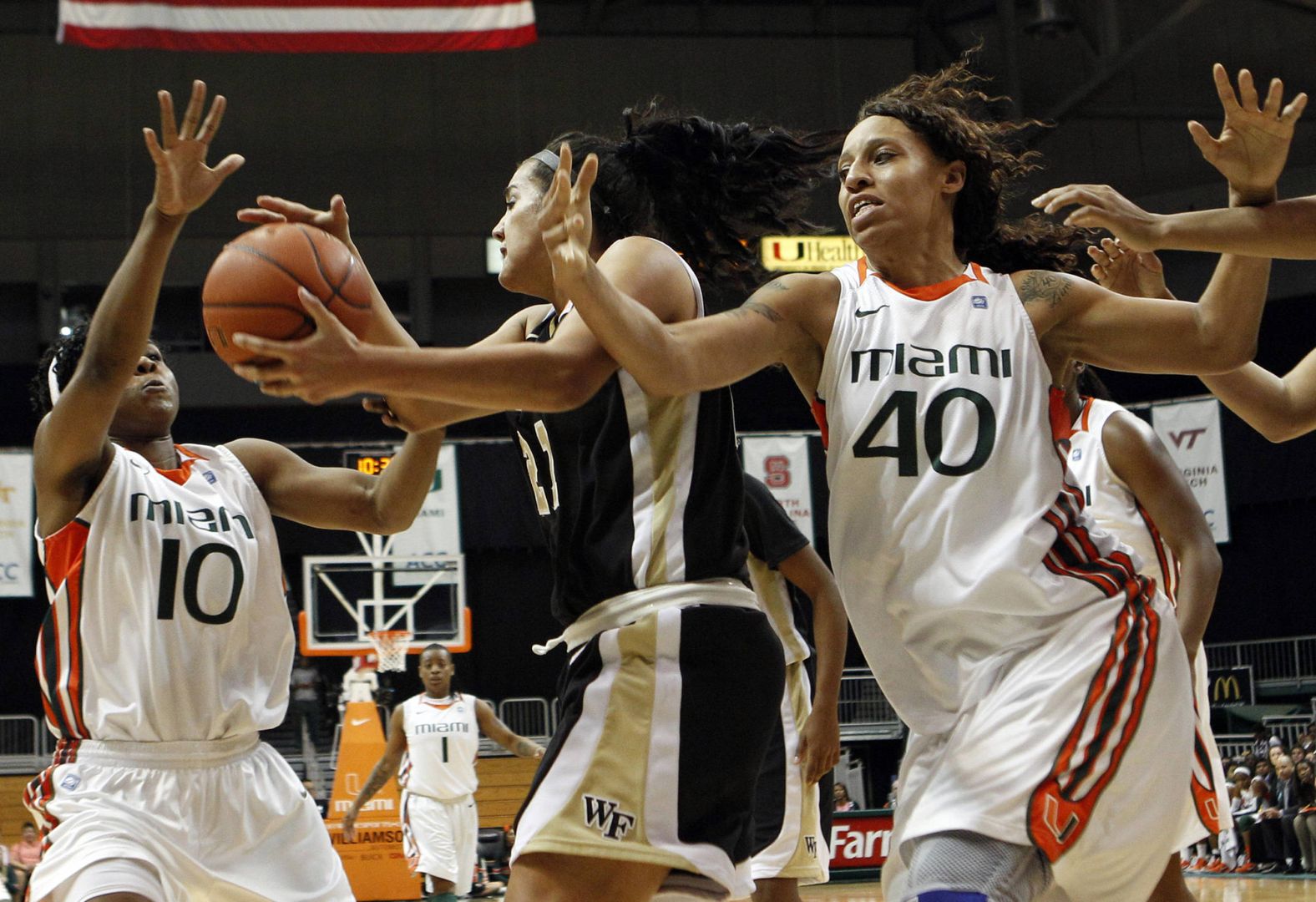 CORALGABLES, Fla. (AP)– Shenise Johnson and Riquna Williams are gone, taking plenty of offensivetalent with them.

So in its opener, No. 24Miami more than compensated with defense.

Playing for the first time infive seasons without the two players who made up the best backcourt in schoolhistory, the Hurricanes got 19 points from Michelle Woods, 17 more from MorganStroman and rolled past North Florida 77-24 in the season-opener for both clubson Friday night.

It was the lowest point totalMiami ever allowed to an NCAA opponent, beating the previous mark of 26 givenup to Bethune-Cookman on Jan. 25, 1990. Still, Miami coach Katie Meier insistedthat the Hurricanes were far from perfect, and her players agreed with thatassessment.

“It wasn’t about ouropponent tonight,” Meier said. “It was about our identity andfiguring it out.”

Miami’s next chance at a homewin comes on Nov. 18 against No. 20 Tennessee — which was upset by Chattanooga80-71 on Friday.

Whatever upset chance thatexisted in this one was gone early. In the first 13-plus minutes, Stroman wassingle-handedly outscoring North Florida 8-6.

And defense was the themethroughout. North Florida shot only 14 percent (7 of 50), watched Miami turn 34turnovers into 43 points, and was outscored by the Hurricanes 42-4 in thepaint.

“Defense, that’s justworking hard,” Stroman said. “That’s about your effort. You reallycan’t teach it. You go out there and work hard.”

Miami allowed only two pointsin the game’s first 10 minutes — the first basket of the game — and forcedNorth Florida into more than three times as many first-half turnovers (17) thanfield goals (five). The Hurricanes scored 14 unanswered points after theOspreys opened the scoring, then built a 36-12 lead by halftime and a 45-15edge four minutes into the second half.

Pepper Wilson added 10 pointsfor Miami, which had all 11 of its players score.

Johnson and Williams — bothfour-year starters and the No. 3 and No. 5 scorers, respectively, in schoolhistory — combined to score 4,410 points for Miami. Johnson also had at least122 assists and 78 steals in all four of her seasons as a Hurricane, and playedin 89 Miami victories.

There was no sense ofnostalgia on Friday, however. For Meier and the Hurricanes, it’s a new chapter.

“I feel a realresponsibility to this particular group of people and how to make themsuccessful,” Meier said.

Destinee Smith and JadaBennett each scored five points for North Florida (0-1). Raneisha Lamar had a game-highnine rebounds for the Ospreys.

WelcomeBack
In herfirst game on the court since an Achilles’ tendon tear midway through the2011-12 season, senior forward Morgan Stroman scored 17 points on 7-of-11shooting and led her team with eight rebounds.

TheStreak Continues
Miamihas now won 41 consecutive games at the BankUnited Center. That is the second longeststreak in the nation, trailing only Stanford’s 79 straight.

CareerNight
SophomoreMichelle Woods led all scorers with 19 points. That was a career-best effortfor the Naples, Fla., native. She also set career-highs in FG attempts (11),and 3-point FG (5).

Superlatives
TheCanes dominated certain statistical categories: outscoring their opponent 42-4in the paint; holding a 43-8 advantage in points off turnovers and forcing 34turnovers.