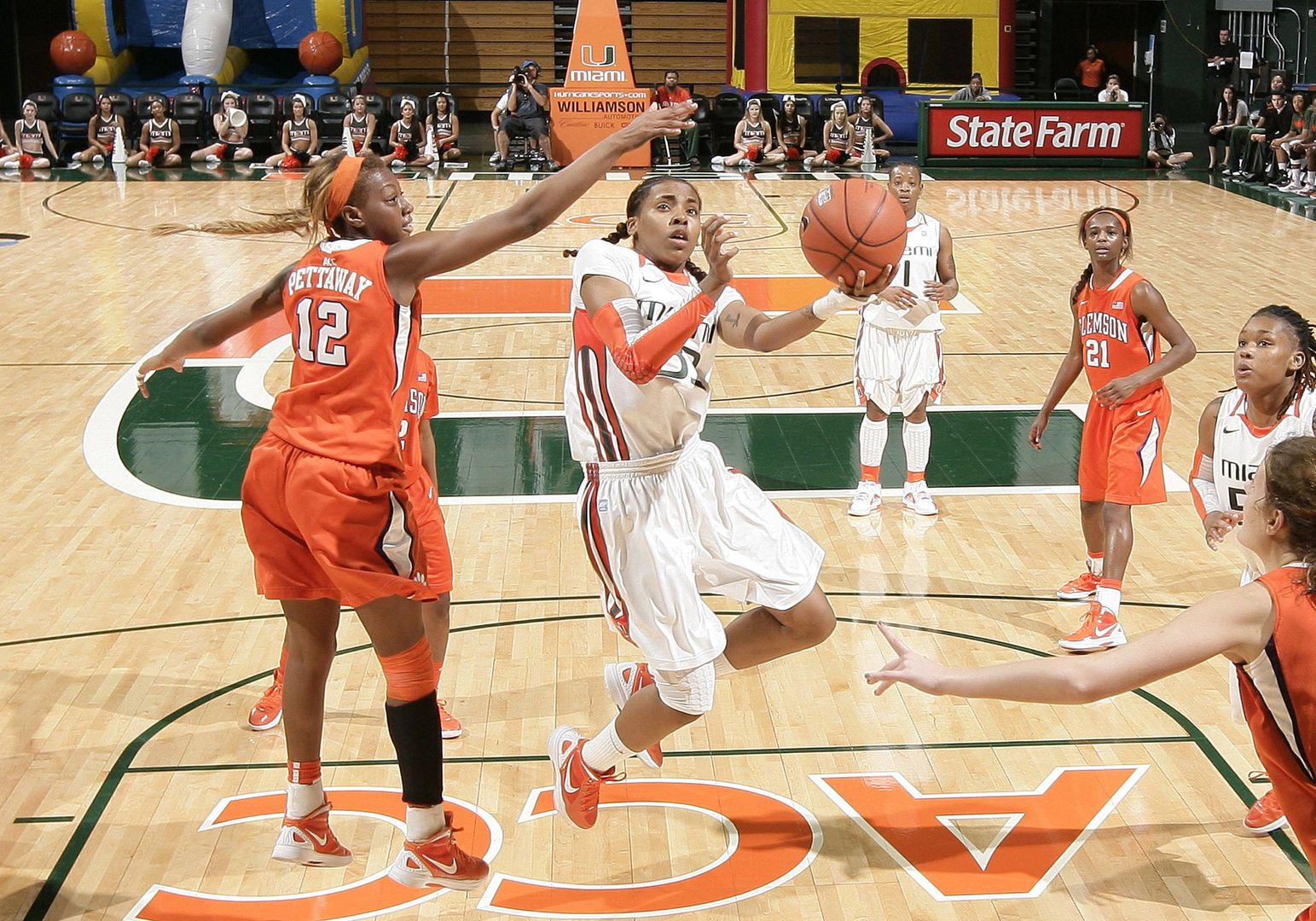 No. 23 Canes Pull Away From NSU in Exhibition

CORAL GABLES, Fla. — The No. 23 University of Miamiwomen’s basketball team opened its anticipated 2012-13 campaign with an 85-63exhibition win over the visiting Nova Southeastern Sharks on Monday night atthe BankUnited Center.

The Sharks would battle it out until the very end, erasingMiami’s 13-point halftime lead to tie the game at 49-49 with just under 13minutes to go in the second period. After a successful jumper helped regain thelead, the Hurricanes entered a timeout at the 11:48 mark up by the slimmest ofmargins at 51-49.

“Not to any surprise at all, Nova Southeastern is a greatbasketball team,” head coach Katie Meier said. “They’re so well-coached,they’re competitive, they fight. Hats off to them.”

But the Canes would fight right back, as a 23-5 run over thenext 7:04 sealed a victory on opening night at the BUC.

“From there, hats off to my team for responding,” Meieradded. “The first half was kind of a grind, and we were feeling through…But Isaid to the team, ‘our depth is better than their depth.’ I really believe thatabout this team.”

The Hurricanes were paced by 14 points from sophomore guardSuriya McGuire and 19 from senior guard Stefanie Yderstrom. The Ostertalje,Sweden native, who earned third-team All-ACC honors a season ago, finished6-of-14 from the floor, including a team-best 4-of-8 from three-point range.

“I have to step up as a leader,” Yderstrom said. “That’ssomething I’ve been working on. I have to talk to my teammates, make sure theyknow the plays, the energy is up.”

Five Hurricanes managed double-digit totals on the night,while the Canes out-rebounded the Sharks by an impressive 55-34 margin. Despiteallowing 10 three-pointers, Miami’s defense held the Sharks to a 29.9 fieldgoal percentage on 20-67 shooting.

Playing without former four-time All-ACC guard SheniseJohnson in the starting line-up for the first time in the past 131 games, CoachMeier used a balance of veteran talent and upstart youth. Yderstrom, Jessica Capers,Morgan Stroman and Shawnice Wilson, who comprise the team’s senior class,combined for 49 points.

“They’re ready. Their whole careers, they’ve been a greatsecond line of support,” Meier said of her senior class. “But they’re also thereason we were winning basketball games, and people just missed it.”

Not to be outdone, McGuire impressed with her combination ofquickness and energy in a 14-point, six-rebound showing. The Minneapolis, Minn.,native couldn’t help but voice her own excitement about year two as a contributorfor the Canes.

“That’s one word Coach told me I have, is comprehension,”McGuire said. “I comprehend things and I take it in. Instead of pushing awayhelp, I get it now. I’m spending more time in the gym, just trying to be a helpfor the team.”

The visiting Sharks were led by Danielle Robinson (16points) and Amanda Burakoski (20), who combined for eight three-pointers.

The Hurricanes open their regular season Friday,Nov. 9 with an 8 p.m. match-up against UNF at the BankUnited Center.