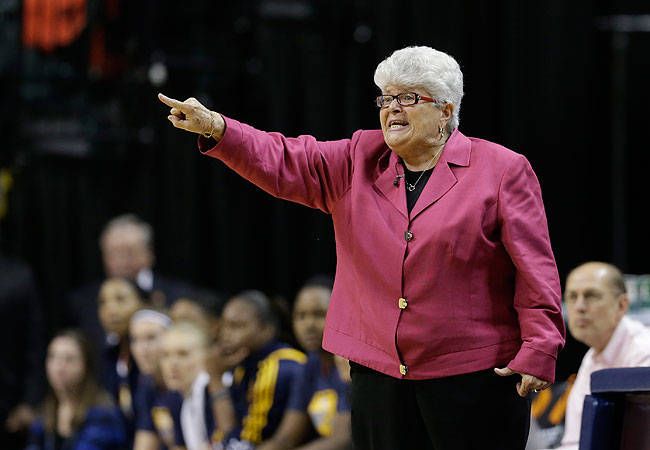 INDIANAPOLIS – Former Miami women’s basketball coachLin Dunn guided the Indiana Fever to the franchise’s first ever WNBAchampionship on Sunday, beating the defending champion Minnesota Lynx, 87-78.The Fever took the best-of-five series, 3-1, in front of a crowd of 15,213 at BankersLife Fieldhouse.

Dunn became the winningest coach in Fever history inthe 2011 season, earning 112 wins through five seasons as head coach. She justcompleted her fifth consecutive appearance in the WNBA playoffs, which is the longestcurrent streak among league coaches.

The Lynx were bidding to become the first repeatchampion since the Los Angeles Sparks in 2001-02. They were 11-2 in the playoffsover two seasons, but went 1-3 upon facing the Fever.

“We probably don’t have asmuch talent top to bottom as they do,” Dunn told WNBA.com about the Lynx. “Sowe had to win the old-fashioned way with great defense, with rebounding, withtoughness.”

Dunn’s storied coaching career predates the passingof Title IX legislation in the 1970s. She spent five years coaching at AustinPeay State (1970-76) and one year at Mississippi (1977-78). She led the Rebelsto a 25-15 record and was named Mississippi Coach of the Year.

Dunn arrived in Miami and coached the women’sbasketball program from 1978-87, where she accumulated a 149-119 record withthe Hurricanes. In her first season, UM finished 10-13 and in fifth place inthe state. The team rebounded in her second season with a record of 18-16.Things took off from there, as the Hurricanes went 24-15 and 19-10 in thefollowing two seasons, reaching the Florida State Championship in 1981 andearning Dunn Florida Coach of the Year honors that same season.

She guided the team to a berth in the AIAW RegionIII postseason tournament in 1981 and 1982. Dunn’s seventh season, in 1984, sawher highest winning percentage (.750) 21-7. She led the team to theirfirst-ever Associated Press Top 20 ranking in 1985 and left Miami as thewinningest coach in program history.

Following her time at Miami, Dunn coached at PurdueUniversity for nine years, leading the Boilermakers to three Big Ten conferencetitles, seven NCAA tournaments, four Sweet Sixteen appearances and a trip tothe Final Four. She earned a 206-68 record and elevated the program’s status toamong the elite in the country.

On the national level, she served on the USABasketball staffs for the 1992 Summer Olympics and 1990 gold medal-winningWorld Championship and Goodwill Games teams. In 1995, she coached the USA JonesCup team to a bronze medal. She also served on the USA Basketball Team selectioncommittee for eight years.

Dunn made the jump to professional basketball in1996 when she was asked to coach the American Basketball League’s PortlandPower in its inaugural season. The next year, she guided the team on aworst-to-first run that earned her the ABL Coach of the Year honor. She servedas head coach and general manager of the WNBA’s Seattle Storm from 1999 to 2002before serving in a scouting capacity for the Fever in 2003. She becameassistant coach in 2004 before being named head coach in 2008. The Fever hasreached the WNBA Playoffs each year since Dunn took the reigns, earning twoConference Championships and now a WNBA Championship.

“To take this team to theFinals and finish it off with a trophy is really big,” she said.