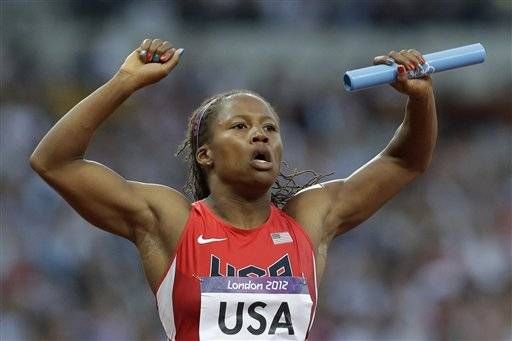 Eleven members of the Hurricanes family are set to particpate either as athletes or coaches during the 2012 Summer Olympic Games in London. The Opening Ceremonies will be held on July 27, with the Closing Ceremonies scheduled for Aug. 12. In between, use this page for links and schedule information for all things UM in London. In addition, follow the official #OlympicCanes Blog for pictures, video and more. See below for media coverage. Lauryn Williams added a gold medal to her resume as Team USA smashed a world record to win the 4x100m relay. Williams ran the anchor leg in the preliminaries on Thursday as part of the relay pool. The sprinter also won a silver medal in the 100m dash in Athens in 2004. Competing in the 10m platform, diver Brittany Viola wrapped up her first appearance at the Olympics with a 15th-place finish in the semifinals. In track and field, Lauryn Williams ran the anchor leg for Team USA to help the squad win its heat and advance to the finals in near-record time. Watch the race here. It marked her third Olympic Games.

DEEM
USA Today: Relays ahead, and U.S. teams better get on the stick In a busy day for the #OlympicCanes, two track stars ran in finals and one diver made her London debut. Running in her second finals of the Games, Murielle Ahouré placed sixth in the highly-competitive 200m dash. She also appeared in the finals of the 100m dash. Right before her race at the Olympic Stadium, T’erea Brown earned sixth in the 400m hurdles. In her first Olympics, Brown set a personal best in the semifinals on Monday. Brittany Viola secured a spot in the semifinals of the 10m platform diving competition after a strong showing in her debut. After posting a second-place finish of 22.49 in heat two of the 200m dash, sprinter Murielle Ahouré qualified for her second finals in London. She will run for a gold medal on Wednesday. T’erea Brown and Murielle Ahouré each recorded strong times at the Olympic Stadium to move on to the next round. Brown set a personal best in the 400m hurdles (54.21) to advance to the finals of the event in her first appearance at the Olympics. Running in her second event this week, Ahouré won her heat in the first round of the 200m dash with a time of 22.55, the second fastest in the field overall. In her Olympic debut, T’erea Brown ran a personal best (54.72) to finish second in heat one and qualify for the semifinals of the 400m hurdles. Sixteen athletes will run in Monday’s semifinals, with eight moving to the finals on Wednesday. In volleyball, Team GB fell to Japan, 3-0, to wrap up action in the Olympics. Ciara Michel had seven spikes, while Savanah Lead recorded 14 spikes and eight digs. The host nation went 1-4 in pool play in its first-ever appearance in the sport at the Olympic Games. Murielle Ahouré qualified for the finals of the 100m dash with a time of 11.01 in the semifinals. Running out of lane three, the sprinter started strong, but finished seventh in the event (11.00). She will next run in the 200m dash preliminaries on Monday. In her Olympic debut, Murielle Ahouré set a personal and Ivory Coast national record with a time of 10.99 in the 100m dash to win heat seven. She will run in heat three of the semifinals on Saturday, hoping to advance to the finals later on in the night. In volleyball action, Team GB suffered a 3-0 defeat to the Dominican Republic to drop to 1-3 with one pool play match remaining. Zach Railey wrapped up his second appearance at the Olympics with a 12th-place finish in the standings in the sailing Finn class. Zach Railey recorded 12th and eighth-place finishes in day four of sailing action in the Finn class. He is currently in 12th place overall, needing to be in the top-10 to advance to the Medal Race with two qualifying competitions to go.

Reuben Ross finished in sixth place in the 3m synchronized springboard diving event with partner Alexandre Despatie. It was the second appearance for Ross at the Olympic Games. In volleyball action, Team GB suffered a tough 27-25 loss in the opening set against Italy and did not recover, falling to 1-2 in pool play with two matches remaining.

DEEM
The Star: Strong US athletics squad targets 30 medals at the Games

Zach Railey made a move up the standings with second and eight place finishes on Tuesday morning. He is currently in 13th place with four qualifying races to go in the Finn class. Watch a replay of the races here.

Savanah Leaf and Ciara Michel helped Team GB win its first ever indoor volleyball match at the Olympics with a hard-fought 3-2 victory. From the BBC: “…the historic point came at 00:37am as Ciara Michel won a block at the net, some of the Team GB players fell to their knees in tears.” Leaf, the youngest member of the team, finished with eight spikes, while Michel had four kills and two aces. Watch a replay of the thrilling match here. The host nation improved to 1-1 in pool play with three more matches left. Sailer Zach Railey finished 13th and 17th, respectively, in two races on the day. He sits in 13th overall with six qualifying races remaining.

Zach Railey, a 2008 silver medalist in Beijing, began competition in the Finn Class in sailing on Sunday morning with a 10th and 15th-place finish. Eight races remain in the preliminaries prior to the medal race. Click here to listen to Railey talk to U.S. Sailing.

VIOLA
Yahoo: Athletes from Florida in the 2012 Summer Olympics

Savanah Leaf and Ciara Michel each made history as they took part in Team GB’s first-ever indoor Olympic volleyball match, but the hosts fell to No. 9 Russia, 3-0. Click here for the box score and here to watch a replay of the match.

The 2012 Olympic Games officially begun with the Opening Ceremonies held inside the Olympic Stadium in London. Following several acts, the athletes and coaches entered in the Parade of Nations. The night ended with the lighting of the Olympic Cauldron and a performance by Paul McCartney. Click here to view photos taken by #OlympicCanes and here for tweets.

Associated Press: With royalty and rock, Britain opens its Olympics