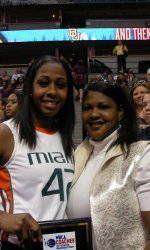 DENVER – The Women’s Basketball Coaches Association has named University of Miami senior Shenise Johnsonto its 2012 WBCA Division I Coaches’ All-America Team, as announced on Saturday, it is the second consecutive season that Johnson has been named to the squad.

The WBCA All-America Team is considered the most prestigious in women’s basketball and is the fifth entity to honor Johnson as an All-America member this season.

“What an incredible honor for Shenise,” said Miami head coach Katie Meier. “There are very few players who have been a two-time member of this team. Shenise is truly deserving, not only for this special season, but also for her unbelievable career.”

With the honor, Johnson becomes the first Miami player to be recognized by the WBCA more than once. Last season, the Henrietta, N.Y. native joined Frances Savage (1992) as the only two players in program history to be named to the All-America team. The organization started naming an All-America Team in 1976.

The WBCA Coaches’ team consists of 10 players with no designation between first and second team.

Johnson led the Canes to a 14-2 conference record and to a second straight NCAA Tournament appearnace. She also was named First Team All-ACC and to the ACC All-Defensive Team for the third consecutive season.

Johnson ended her collegiate career as just the second woman in NCAA Division I (Nancy Leiberman) to score 2,000 points, grab 1,000 rebounds, dish out 500 assists and have 400 steals.