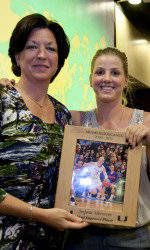 CORAL GABLES, Fla. – Head Coach Katie Meier and the University of Miami women’s basketball team will host their annual postseason banquet to mark the end of the 2011-12 season on Thursday, April 19 at 7:30 p.m. at the Newman Alumni Center on the UM campus. Fans are invited to attend as the team is honored after a successful 2012 season.

Dinner will be served with an awards ceremony to follow promptly after.

This season, the Hurricanes finished the year with a 26-6 record and advanced to the NCAA Tournament for the second consecutive time. They went 16-0 at home, their second straight season with a perfect record inside the BankUnited Center and they have won 40 in row – the second longest active streak in the nation.

Miami rose to its highest-ever ranking, when it reached No. 5 during the season. The Canes also defeated then fifth-ranked Maryland in January. It marked the first time in program history that UM defeated a Top 5 team.

Tickets for the banquet are $50 for adults and $35 for children 12 and under. In order to accommodate everyone, the team asks that guests register in advance by Friday, April 13 by calling the Hurricane Club at (305) 284-6699.