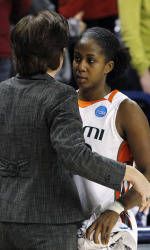 ST. LOUIS – University of Miami senior Shenise Johnson was selected to the 2011-2012 United States Basketball Writers Association (USBWA) All-America honors, in a repeat of events identical to the conclusion on Johnson’s 2010-2011 season.

The USBWA award follows her selection of All-American on Tuesday by the Associated Press. Johnson was one of two seniors and one of three ACC players selected to the team, a 10-women roster that is selected by USBWA representatives. Johnson is the first player to earn this USWBA award in back-to-back seasons and is again a finalist for the USBWA’s National Player of the Year award, which will be announced on Tuesday, April 3.

Johnson is also one of only three Hurricanes awarded with AP All-America honors, as well as being only the second woman in history of Division I basketball (Nancy Lieberman – Old Dominion, 1976-80) to score 2,000 points, grab 1,000 rebounds, dish out 500 assists and record 400 steals in a career.

Her many other accomplishments for the season include being named to the College Sports Madness First Team All-America squad on March 6 and the second team of NetScouts All-American team on March 21. Her 131 starts is the longest active streak in the nation, as well as her ACC-leading 35 career double doubles for all conference-active players. She was named First Team All-ACC and to All-ACC Defensive Team at the conclusion of the 2011-2012 regular season – the third time she was named to each squad.