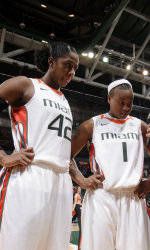 Johnson and Williams Named All-America by the Associated Press

It was the second consecutive season that the duo earned recognition from the AP. Last year, Johnson was on the third team and Williams was named honorable mention.

Williams joins Johnson and Frances Savage (1991) as the only three Hurricanes to earn AP All-America honors.

During the season, Johnson became only the second woman in the history of Division I basketball (Nancy Lieberman – Old Dominion, 1976-80) to score 2,000 points, grab 1,000 rebounds, dish out 500 assists and record 400 steals in a career.

“I am really excited to be recognized along with this fine group of young ladies,” said Shenise Johnson. “This is a team sport and I consider this honor a reflection of all the hard work that my teammates, coaches and I have put into being the best team we could possibly be.”

Johnson was also second in the league this season in scoring (17.0 ppg), while Williams was right behind her in third place, averaging 16.6 points per contest.
Miami earned its second straight trip to the NCAA Tournament as a No. 3 seed, this year defeating Idaho State in the first round before falling to Gonzaga in the Round of 32.