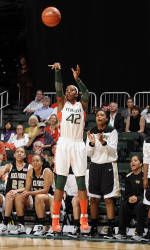 ATLANTA – Miami senior Shenise Johnson has been named one of 12 finalists in contention for The State Farm Wade Trophy, which is presented annually to the nation’s most outstanding NCAA Division I women’s basketball player as announced on Friday.

The State Farm® Wade Trophy Committee, along with the Women’s Basketball Coaches Association (WBCA) and the National Association for Girls and Women in Sport (NAGWS) made the announcement after the candidates were selected by a vote of committee members composed of leading basketball coaches, journalists and administrators.

Johnson ended her collegiate career as one of the most versatile players in the history of women’s basketball. In fact, only one woman in Division I has every reached the career numbers that the Henrietta, N.Y. native has. Johnson joins only Nancy Lieberman as the only women to score 2,000 points, grab 1,000 rebounds, dish out 500 assists and have 400 steals in a career.

The winner of the Wade Trophy will be announced during the WBCA Awards Show, which will be held at 5 p.m. MT Monday, April 2, in Denver. The event is part of the WBCA National Convention and is held in conjunction with the NCAA® Women’s Final Four®.

The State Farm Wade Trophy, now in its 35th year, is named after the late, legendary three-time national champion Delta State University coach, Lily Margaret Wade. This most prestigious award, regarded as “The Heisman of Women’s Basketball”, debuted in 1978 as the first-ever women’s national player of the year award in college basketball.

Last year’s State Farm Wade Trophy winner was Connecticut’s Maya Moore, who was the first student-athlete to win the award three consecutive years (2009, 2010, 2011.) The first recipient of the Wade Trophy was Carol Blazejowski of Montclair State in 1978. Other Wade Trophy/NCAA Division I Player of the Year recipients include many WNBA standouts such as Teresa Weatherspoon (1988), DeLisha Milton-Jones (1997), Candace Parker (2007), Ticha Penicheiro (1998), Sue Bird (2002) and Diana Taurasi (2003).