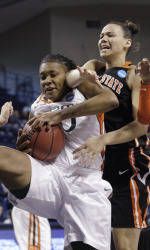 Williams did not make the trip to Spokane for an unspecified team violation, but it didn’t slow the Hurricanes at all. Miami blasted Idaho State 70-41 on Saturday in the first round of the NCAA women’s basketball tournament.

“We don’t have any real adversity,” Meier said. “We have opportunity right now.”

Shenise Johnson took advantage and scored 20 points. She also made a bit of history as she joined Nancy Leiberman as the only Division I players in history to record 2,000 points, 1,000 rebounds, 500 assists and 400 steals in a career. Johnson needed four more steals to reach the mark and she got them against the Bengals.

While Miami is known as one of the top offenses in college basketball, it was defense that stood out Saturday. The Hurricanes held Idaho State to a season-low 16 points in the first half and to 25 percent shooting in the game.

“When you look at those numbers, that’s our defense,” Meier said. “Our defense was the story of the game.”

Johnson, also an all-ACC selection, said it was part of the game plan to jump on the Bengals early.

“We wanted to dictate everything that would happen out there,” Johnson said. “We wanted to show who Miami is, and we were on our toes tonight.”

Idaho State coach Seton Sobolewski said he was proud of his team, but they were outmatched.

He noted the Bengals did force 20 turnovers.

“As a point guard, I felt like I had to kind of adjust my passes, be a little bit quicker,” said Kaela Oakes of Idaho State. “I just felt like it was more difficult to guard and dish and get to do what is normally easier for me to do. Their athleticism, their long arms, and being able to cover the floor, like coach said, is really tough as a point guard.”

“They are most athletic group that we’ve faced,” Vella said.

“I knew coming into the game I would have an advantage because their tallest player is 6-1 or 6-2,” Wilson said. “It’s important to use our size and strength as an advantage.”

Johnson was 8 for 15 from the field and had only two turnovers. Miami shot 46 percent.

The Bengals lost the rebound battle 45-28. But they did hold the Hurricanes below their season scoring average of 76.9 points per game.

Miami jumped out to a 10-3 lead. On consecutive trips down the floor, Johnson forced Idaho State turnovers and then converted both layups to give the Hurricanes a 20-8 lead with 10:28 left in the first.

Miami led 33-16 at halftime, behind 13 points from Johnson and 10 rebounds from Wilson.

Miami kept pouring it on in the second half, leading 55-30 with 8:54 left. Idaho State could not close the gap even as Miami put in substitutes.

Idaho State will return four starters from this year’s team.

Gonzaga beat sixth-seeded Rutgers 86-73 in the first game on Saturday to advance to Monday.

POST-GAME NOTES
The Game’s Best All-Around Player
Shenise Johnson always fills in the box score and this one was no different as the All-American scored 20 points, grabbed six rebounds, dished out four assists as well as picking up four steals.

In fact, those steals made history for senior. Johnson becomes the second woman in NCAA history to record 2,000 points, 1,000 rebounds, 500 assists and 400 steals in a career. She joins only Nancy Lieberman of Old Dominion (1976-80) as the only players to accomplish the feat.

All Over the Glass
Pepper Wilson recorded her second-highest rebound total of the season, racking up 10 in the first half and 14 overall. Miami outrebounded the Bengals, 45-28 for the night.

Right Out of the Gate
The Hurricanes never trailed in tonight’s game and their largest lead was 32 points. It was the ninth time this season that Miami had the lead the entire game.

Double-Digits
Senior Sylvia Bullock isn’t known for her scoring, but tonight she poured in 11 points to go along with her four rebounds. It was the third time this season that she reached double figures in scoring.

Stellar Defense
Miami’s defense held Idaho State to their lowest halftime point total this season, allowing only
16 Bengal points through the first 20 minutes of play. Miami has held opponents under 20
points in the first half six times this season.