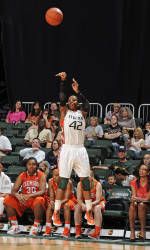 CORAL GABLES, Fla. – University of Miami senior Shenise Johnson and Riquna Williams were among 52 women that were named to All-Region Teams by the Women’s Basketball Coaches Association on Thursday.

On, Monday, March 19, the selection committee will review these 52 candidates and trim the list to 40 finalists, all of whom will be in the running for selection to the 10-member WBCA Division I Coaches’ All-America Team.

Both Johnson and Williams were among the 40 finalists a season ago and Johnson went on to be the second player in program history to earn WBCA All-America honors.

The backcourt duo was named First Team All-ACC for the second straight season, it was the third straight first team honor for Johnson – just the 11th player in conference history to earn that distinction.

Johnson was also named to the All-ACC Defensive Team for the third consecutive season.

The 2012 WBCA Division I Coaches’ All-America Team will be announced at 1:05 p.m. MT Saturday March 31, during the NCAA’s Super Saturday festivities at the Pepsi Center in Denver.